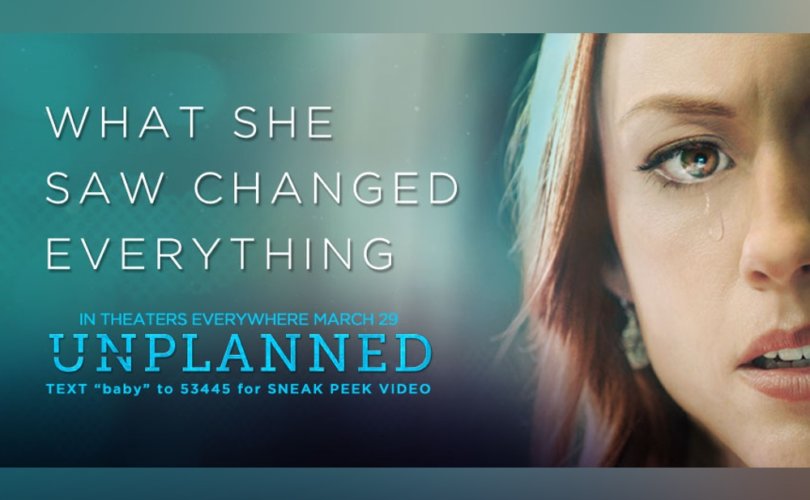 WASHINGTON, DC, April 1, 2019 (LifesiteNews) – Social media giant Twitter is in the midst of a public relations nightmare after it suspended on the weekend the official Twitter handle for the pro-life film “Unplanned” and was subsequently accused of prejudicial targeting of conservatives by numerous Twitter users.

Following LifeSiteNews’ initial report over the weekend on the suspension, the film’s Twitter handle was reinstated and — due to the media storm that followed — gained over tens-of-thousands of new followers.

We would like to thank the people who maliciously and falsely reported UnplannedMovie to @Twitter.
Notice followers before and after.
Your move… #unplannedreaction pic.twitter.com/dHZ7Xxz8u5

This, however, met with another “technical snag” by Twitter.

Late Sunday evening, individuals started to see their requests to follow the account rejected, along with a reported 100,000 followers inexplicably removed from following the film’s handle.

Hearing the reports of this issue, LifeSiteNews reached out—again—to Twitter. This time, to our surprise, we heard back from their press office, almost immediately.

The Twitter spokesman indicated that although @UnplannedMovie’s account was reinstated, followers of suspended accounts could take approximately 24 hours to “stabilize.” Like the explanations given for the suspension, this seemed to be partial truths at best. We quickly reached out to two highly experienced system engineer and coders, requesting more information on why this “instability” could occur. If Twitter programmers have the ability to suspend an account by code, wouldn’t deleting this same code reinstate the account, and have no effect on those who seek to follow it? If this instability is an effect of the suspension, why would users that were able to follow the account be dropped from it—nearly 100k of them?

A former technical program manager from Microsoft, with a decade of experience in cloud services engineering, responded. “While I’m not personally familiar with Twitter’s systems, high availability services will only do what they’re programmed to do. Unless all accounts are experiencing the same behavior under similar conditions, there is almost certainly some targeting throttling going on. If Twitter is saying there is some “instability” being experienced by a particular account (and not all accounts) it is likely because they’ve programmed that instability; either directly by setting limitations and thresholds or indirectly by utilizing complex algorithms that will do it for them.”

This assessment seems to correspond to undercover investigative work from Project Veritas last year that certain individuals at Twitter are, in fact, targeting the speech of those utilizing their social media platform. According to this undercover video evidence, these individuals are making decisions on who or what to allow to trend, to be viewed by others—in a word, these individuals are dictating what may be seen, and suppressing speech they disagree with.

In all fairness, the suspension and “technical issues” associated with the still-“unverified” movie account may be, as another system engineer put it, “the data being disseminated over a bunch of redundant data centres. As the account was deactivated, these servers might have, each, “partial views” of the account and need time to stabilize in their view”, but despite CEO Jack Dorsey’s insistence that targeting does not take place, the recent “instability” furthers the narrative to the contrary.

Commenting on the issues they have faced on Twitter, “Unplanned” filmmakers Chuck Konzelman and Cary Solomon replied to LifeSiteNews, exclusively.

When asked if Twitter had given reason or cause to why the account was initially suspended, they replied, “No, no reasonable answer provided as to why. I believe there was mention of being 'linked' to some account… but our film only has one account. For the record, the Twitter account is owned and operated by Soli Deo Gloria Releasing, LLC, which is a single purpose entity created to market the film. Any 'linking' was done on the Twitter side, by Twitter personnel.”

The film’s team, including the filmmakers, began recognizing that there were “technical issues” occurring almost immediately upon reactivation. “Deletion of some of our tweets (without consent), including a 'we're back up' notification to our followers, as well as deletion of our followers yesterday. We went from well over 100,000 followers to 151 followers. People looking to follow us were immediately dropped from the system. Those who noticed and were affected included: Shannon Bream (Fox News); Dana Loesch; Patricia Heaton,” Konzelman and Solomon explained.

The suspicions that this went well-beyond technical issues were heightened, later that Sunday. “At no time, despite going from 7,000 followers on Friday to 230,000+ followers as of this morning, did “Unplanned” ever 'trend', according to Twitter. This seems highly unlikely, unless someone is toying with the algorithm,” they added.

Konzelman and Solomon concluded, “Whether we're being attacked by Twitter's management (based on their own bias), or whether they're shutting us down at the recommendation of leftist opponents, neither answer is acceptable. If Twitter wishes to become a forum only for left-leaning dialog, that's fine: they just can't simultaneously claim — to the world in general and federally communications regulators in particular — that they are open and fair, and allow free speech for all.”

Questions still remain. If Twitter endured a weekend filled with public relation nightmares, why did those in corporate fail in anticipating “known” instability issues, proactively addressing any said issues by announcing the mistake of suspending the account? Why did they not proactively announce that due to the suspension, instability would occur for 24-48 hours after reinstating it, and announce that the account—and other conservative “influencers” would be “verified” in an act of good faith? The result of these failures seems only to confirm the suspicions expressed by many engaged in social media—that of increased targeted censorship of conservative voices by politically-leftist corporate entities.

As one user put it: “no one in the world believes this is an accident.”

A “protest and vigil at Twitter over 'Unplanned'” censorship will be held on April 2. Details can be found on Facebook here.