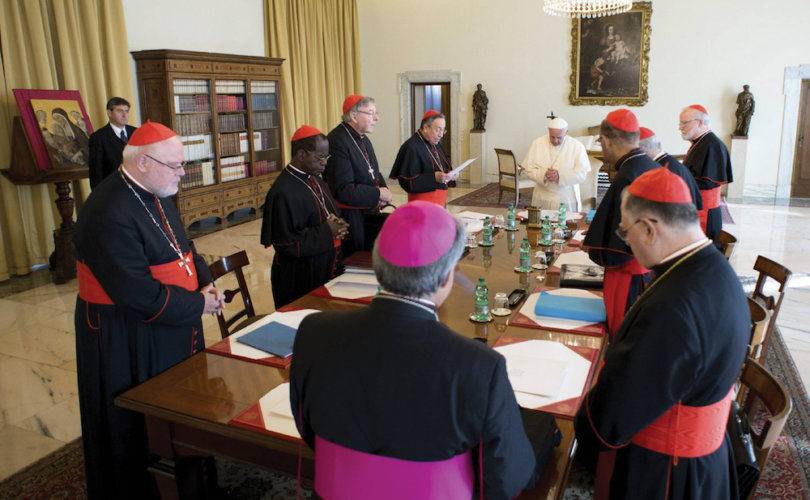 February 15, 2017 (CatholicCulture.org) – What in the world is going on in Rome this week?

First the Vatican press office issues a statement from the Council of Cardinals, supporting the Pope. It would certainly be news if the Council of Cardinals did not support the Pope. But why was this statement newsworthy? Why did the Council thank the Pontiff in February for a speech he delivered to the Roman Curia in December? Is there any way to see this message as something other than damage control—as a bid to reassure the world that the increasingly evident tensions within the Catholic hierarchy are not tearing the Church apart?

Unfortunately, the evidence of those tensions continues to mount. Wednesday the Vatican press launched a book by Cardinal Francesco Coccopalmerio, backing the German/Maltese/Argentine interpretation of Amoris Laetitia. So now Cardinal Coccopalmerio, the Vatican’s top official on matters canonical, is in direct conflict with Cardinal Gerhard Müller, the top official on matters doctrinal. If the Coccopalmerio book was intended to quiet questions about the dubia, it will inevitably fail, just as Monday’s odd press release predictably failed to calm concerns about intramural Vatican conflicts. The universal Church does not need one more prelate’s personal reading of the papal document; we need a definitive answer, which can only come from the Pope himself.

But there’s more. After the Vatican announced a press conference for the launch of the Coccopalmerio book—with enough ballyhoo to confirm the impressions that this was a bid to end the debate—the cardinal himself failed to appear for the event. The cardinal’s office explained that he had a scheduling conflict.

Rumors of intrigue are always circulating around the Vatican. But in recent weeks the rumor mill has been spinning at a fearsome pace, churning out disturbing reports that are, alas, not easily dismissed. Is the situation really as tense and volatile as those rumors suggest? If the public announcements of the past two days were designed to convince us that it’s business as usual at the Vatican, they have failed utterly.

This article was originally publishe on CatholicCulture.org and is re-published with permission.

INTERVIEW: Author’s admiration for Pope Francis turns to disenchantment over his ‘superficiality,’ ‘ambiguity’

Under Pope Francis, has the ‘theology of dissent’ triumphed?