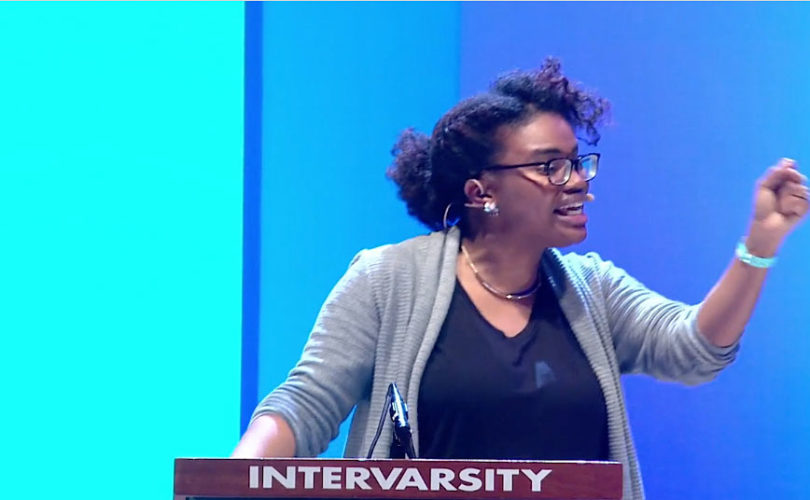 The comment came from Michelle Higgins, the director of Faith for Justice and a #BlackLivesMatter activist, during her discussion (video) on racial injustice. “We could end the adoption crisis tomorrow. But we’re too busy arguing to have abortion banned. We’re too busy arguing to defund Planned Parenthood,” charged Higgins. “We are too busy withholding mercy from the living so that we might display a big spectacle of how much we want mercy to be shown to the unborn. Where is your mercy? What is your goal and only doing activism that is comfortable?”

The problem here is that Higgins bashes a social justice movement that aides her cause.

You see, Higgins’ overall discussion challenged Christians to get uncomfortable and address the “idolatry of white supremacy” perpetuated within evangelical churches. “The evangelical church has taken the dominance and power of eurocentrism and made it its sidepiece,” said Higgins. “Do you see it? Maybe not because if you’re in an evangelical church you might not be hearing jack about it.”

Just ask Dr. Alveda King, the niece of Dr. Martin Luther King Jr. and Director of African American Outreach with Priests for Life. King openly shares her testimony of two abortions and God’s healing as she advocates against abortion’s racist intent.  “Abortion and racism are evil twins, born of the same lie. Where racism now hides its face in public, abortion is accomplishing the goals of which racism only once dreamed,” wrote King. “Together, abortionists are destroying humanity at large and the black community in particular.”

Higgins correctly noted that followers of Jesus cannot hide the truths of history. Pro-lifers agree. That’s one reason why we want to see an end to the racial injustice perpetuated by abortion and Planned Parenthood.

We refuse to whitewash Planned Parenthood’s origins. Margaret Sanger, the founder of Planned Parenthood, was an inarguably racist eugenicist who started the abortion mill to regulate the births of minorities, or what Sanger called “benign imbeciles, who encourage the defective and diseased elements of humanity in their reckless and irresponsible swarming and spawning.”

Today, Sanger’s racist motivations continue on. According to the pro-life website protectingblacklife.org, 79 percent of Planned Parenthood’s abortion facilities are “located within walking distance of African American or Hispanic/Latino neighborhoods.”

Planned Parenthood's illegal harvesting and trafficking of baby parts is a social justice issue for the Church, if ever one existed. Pro-lifers seek to end this dehumanizing of the unborn and exploitation of expectant mothers. The sacredness of human life is something every follower of Christ is instructed to protect.

Chelsen Vicari serves as the Evangelical Programs Director for the Institute on Religion and Democracy.