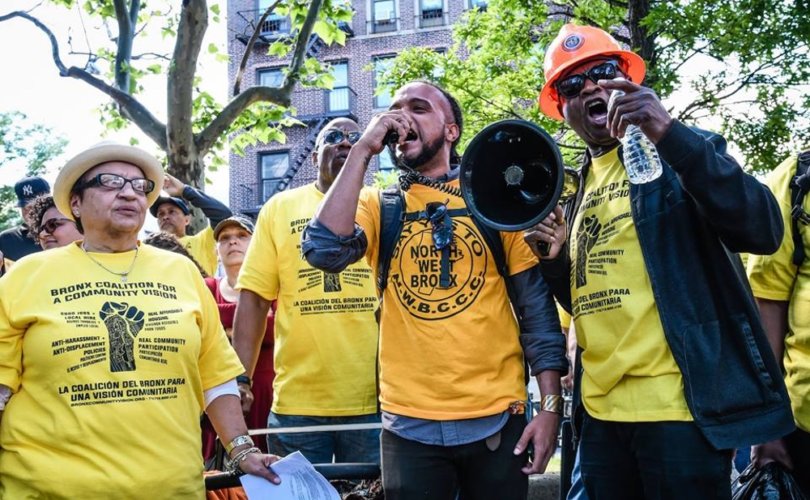 Members of Northwest Bronx Community & Clergy Coalition during a 'Bronx Coalition for a Community Vision' demonstration.www.northwestbronx.org

In 2012, the Reform CCHD Now coalition alerted the US bishops to serious problems with NWBCCC including homosexual activism and the promotion of Marxism. Monsignor Kevin Sullivan of the Archdiocese of New York responded in writing by indicating that this grantee was previously reviewed and would not receive further grants from the CCHD. He wrote:

After the most recent review of their CCHD grant request, prior to your letter, the NWBCCC was not recommended for funding, and will not be receiving money from the Catholic Campaign for Human Development.

Just two years later, during the 2014–2015 grants cycle, NWBCCC would again receive funding from the CCHD. Toward the end of 2014, we reported how the NWBCCC's agitation tactics resulted in the deaths of two police officers. In 2016, despite its continued promotion of Marxism and blatant homosexual activism, NWBCCC received yet another grant from the CCHD. And even though we proved NWBCCC's gravely immoral activism in a new report, the CCHD responded by INCREASING the amount of funding for this vile organization to $60,000 per funding cycle.

Yes, that is correct — this anti-cop, pro-Marxist and homosexualist organization is now receiving $60,000 per year from the US Bishops through the CCHD program.

All told, since 2005, the NWBCCC has received $325,000 in nine different grants from the CCHD. And the problems with this grantee continue. NWBCCC's recent activity shows not only the continued promotion of homosexuality, it also shows that NWBCCC is promoting abortion through its membership in the Campaign for New York Health coalition.

One of NWBCCC's official programs is a youth organization called Sistas and Brothas United(SBU). Previous reports noted the blatant promotion of homosexual activism to youth through this program, and sadly this is an ongoing problem.

The signs of homosexual activism are readily apparent at NWBCCC's own website, especially where it describes SBU as offering a safe place “for youth in middle and high school to address the various forms of systemic oppression they encounter in our communities, including racism, homophobia, sexism, and ageism.”

The description of SBU later continues a focus on youth homosexuality, stating that another component of their work is dismantling the school to prison pipeline for LGBTQ students among others.

The SBU program's Facebook page, however, makes it abundantly clear that this program is still promoting homosexual activism to kids as one of its major components.

SBU praises the homosexual activism of one of its youth advocates

NWBCCC is a member of a Pro-Abortion Coalition

NWBCCC's 2018 annual report mentions that as part of its push for socialized healthcare NWBCCC joined the Campaign for New York Health Coalition.

The problem here is that the Campaign for New York Health (CFNYH) is adamant that government funded abortion and contraception MUST be part of universal health care.

CFNYH's website states this under the euphemism of “reproductive health” and more clearly in a poster created for Facebook that states socialized healthcare would “significantly improve women's health by mandating coverage of all essential reproductive care and all LGBTQ health care. It would take away financial barriers to preventative care and cover all forms of contraception.”

Finally, CFNYH signed on to the “NY People's Platform” that explicitly states “Comprehensive reproductive health care, including abortion, is a fundamental component of every person's health, bodily autonomy, privacy and equality.” [emphasis added]

The CCHD grant agreement clearly states in section A. 5. “Grantee agrees that it will not knowingly participate in any coalition that has as part of its organizational purpose or agenda the promotion of actions in conflict with fundamental Catholic moral or social teaching.”

Clearly NWBCCC is not currently nor was it ever worthy of receiving the hard-earned money of faithful Catholics in the pews. What is absolutely infuriating in this particular case is that despite repeated warnings to the CCHD, and a claim from the Archdiocese of New York that NWBCCC “will not be receiving money from the Catholic Campaign for Human Development” — the CCHD actually INCREASED its funding to this horrible organization. This shows that the entire “Review and Renewal” CCHD claimed to have undertaken in 2010 was a farce and a smokescreen. It is time to end the CCHD NOW.

Please contact the CCHD and demand answers. Ask them how or why an organization like NWBCCC ever received a grant and if CCHD will demand Catholic money to be returned for violating CCHD guidelines and Catholic moral/social teaching.