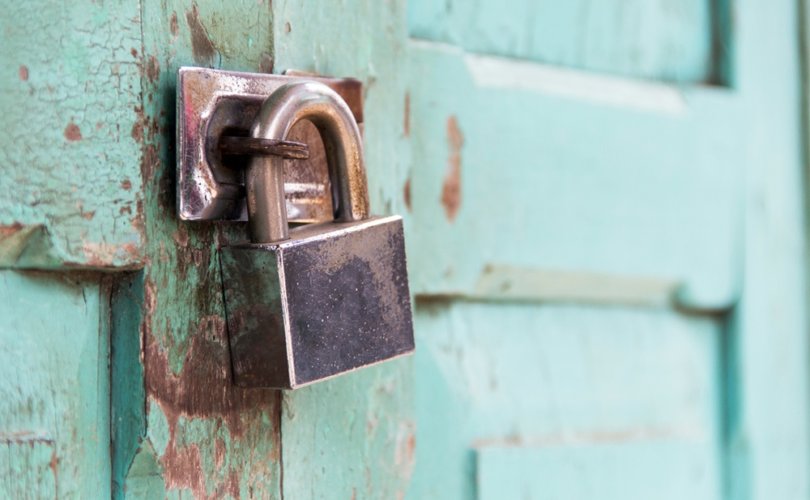 June 5, 2020 (CatholicCulture.org) — All last week, CWN carried headlines about tight government restrictions on Catholic churches — restrictions that raised serious questions about religious freedom. So on Friday, when the US Conference of Catholic Bishops sent out a notice about the annual observance of Religious Freedom Week, which will be held June 22–29, it seemed a very timely announcement.

No such luck. The USCCB offers a generous packet of material, including themes for each day of the week and background materials on adoption, health-care policy, migration, and the plight of religious minorities in Asia and Africa. Nothing about civic officials who have proposed to ban the celebration of Mass, or set their own standards for reception of Holy Communion. Nothing about the classification of religious services as “non-essential” — unlike the “essential” liquor stores and marijuana dispensaries.

During the past several weeks loyal Catholics have seen that there is a tension — at the very least — between the edicts of public-health officials and the independence of the Catholic Church. The USCCB apparently hasn’t noticed.

From Germany comes the news that more than 10,000 Catholics in the Munich archdiocese formally renounced their faith last year. Other German dioceses have seen the same sort of mass flight from their churches, but the Munich archdiocese is particularly interesting because it is headed by Cardinal Reinhard Marx, a member of the Council of Cardinals that advises Pope Francis. Since Cardinal Marx was installed in Munich, the Catholic proportion of the local population has dropped from 53% to 47%.

Three other members of the Council of Cardinals are sitting archbishops of major metropolitan sees. Cardinal Sean O’Malley has seen Boston’s Catholic population drop by a similar amount, from 53% to 45% of the overall population. In Mumbai, India, Cardinal Oswald Gracias has seen the Catholic minority shrink from 2.6% to 2.3%. And in Tegucigalpa, Honduras, Cardinal Oscar Rodriguez Maradiaga, the chairman of the Council, has seen the most spectacular losses; during his tenure the Catholic proportion of the city’s population has plummeted from over 90% to about two-thirds.

Pope Francis has said that as he reforms the Roman Curia — the task for which the Council of Cardinals was created — his top priority is evangelization. It’s odd, then, that to guide him through this vital work, he has chosen a panel composed of two career Vatican diplomats who have never led a diocese (Cardinals Pietro Parolin and Giuseppe Bertello), and four residential archbishops who have presided over marked numerical decline in their churches.