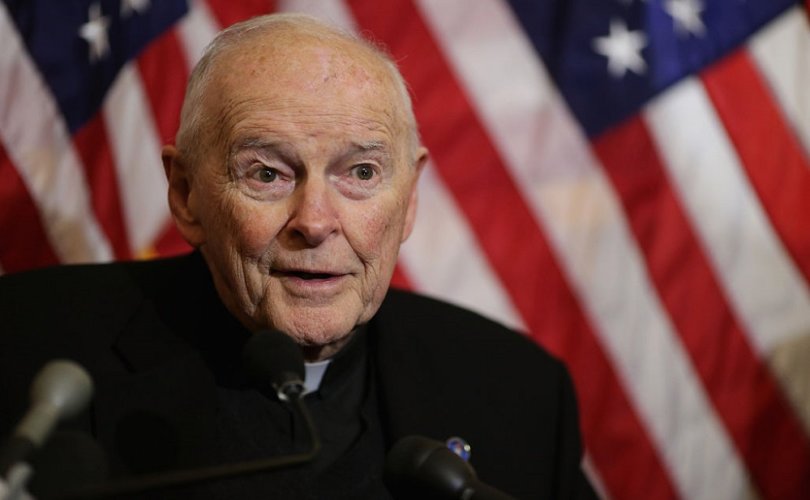 August 18, 2020 (CatholicCulture.org) — After I posted yesterday on the Biden-Communion controversy, a few friendly readers asked me to explain how the American bishops settled on their current policy. I’m happy to oblige.

The chief architect of the US bishops’ current policy is: Theodore McCarrick.

Do I have your full attention now?

The debate over whether pro-abortion politicians should be barred from Communion, which had been simmering in the US for years, came to a boil in 2004, when the Democratic Party nominated Senator John Kerry, a Catholic with an unmixed record of support for legal abortion, for the presidency. With prominent prelates split, the US bishops’ conference formed a committee to address the question, with then-Cardinal McCarrick as chairman.

The McCarrick committee sought advice from the Vatican, and received a reply from then-Cardinal Joseph Ratzinger, in his capacity as prefect of the Congregation for the Doctrine of the Faith. McCarrick never voluntarily disclosed the contents of Cardinal Ratzinger’s letter.

When the US bishops gathered in Denver for their annual meeting, McCarrick reported that although his committee was not ready with a final report — and would not be ready until well after the November election — he thought it was not “pastorally wise and prudent” to deny Communion to anyone, because it could “turn the Eucharist into a perceived source of political combat.”

In making that judgment, McCarrick claimed that he had the support of Cardinal Ratzinger. He conceded that Ratzinger “recognizes that there are circumstances in which Holy Communion may be denied.” But he claimed that the Vatican official “clearly leaves to us as teachers, pastors, and leaders whether to pursue this path.” That was false.

Having heard McCarrick’s report, the assembled bishops moved on to consideration of an election-year statement, Catholics in Political Life. Despite the recommendation of the McCarrick committee, the full body of bishops did not recommend against denying Communion to abortion supporters. Instead the bishops decided that “such decisions rest with the individual bishop in accord with the established canonical and pastoral principles. Bishops can legitimately make different judgments on the most prudent course of pastoral action.”

Although the conference as a whole had not approved the suggestion of the McCarrick committee, the report from that committee remained posted on the web site of the US bishops’ conference. The letter from Cardinal Ratzinger was not posted. McCarrick said that Ratzinger had requested that his letter be kept confidential. That, too, was apparently false.

Two weeks after the US bishops’ meeting, a veteran Vatican journalist, Sandro Magister of L’Espresso, posted the full text of Cardinal Ratzinger’s letter. The contents of that letter, the London Daily Telegraph remarked, “hugely embarrassed Cardinal McCarrick.” The future Pope had not said what McCarrick claimed he said. And as a result of McCarrick’s misleading report to his colleagues, the liberal British Catholic weekly, The Tablet, reported: “America’s bishops have chosen not to follow Vatican guidelines over the distribution of Communion to pro-abortion politicians.”

In fact, Cardinal Ratzinger had written, if a Catholic is a prominent supporter of legal abortion, and persists in that support despite private admonitions from his bishop, when he presents himself for Communion, “the minister of Holy Communion must refuse to distribute it.” [emphasis added]

If the US bishops had been presented with that argument by Cardinal Ratzinger — an argument strongly supporting the stand that had already been taken by then-Archbishop Raymond Burke of St. Louis and Bishop Fabian Bruskewitz of Lincoln — would they have adopted a stronger line? We’ll never know, thanks to the characteristically manipulative role played by Theodore McCarrick.

A few other excerpts from the Ratzinger letter:

The practice of indiscriminately presenting oneself to receive Holy Communion, merely as a consequence of being present at Mass, is an abuse that must be corrected.

Not all moral issues have the same moral weight as abortion and euthanasia. For example, if a Catholic were to be at odds with the Holy Father on the application of capital punishment or on the decision to wage war, he would not for that reason be considered unworthy to present himself to receive Holy Communion. While the Church exhorts civil authorities to seek peace, not war, and to exercise discretion and mercy in imposing punishment on criminals, it may still be permissible to take up arms to repel an aggressor or to have recourse to capital punishment. There may be a legitimate diversity of opinion even among Catholics about waging war and applying the death penalty, but not however with regard to abortion and euthanasia.

… the minister of Holy Communion may find himself in the situation where he must refuse to distribute Holy Communion to someone, such as in cases of a declared excommunication, a declared interdict, or an obstinate persistence in manifest grave sin.

When ‘these precautionary measures have not had their effect or in which they were not possible,’ and the person in question, with obstinate persistence, still presents himself to receive the Holy Eucharist, “the minister of Holy Communion must refuse to distribute it.”