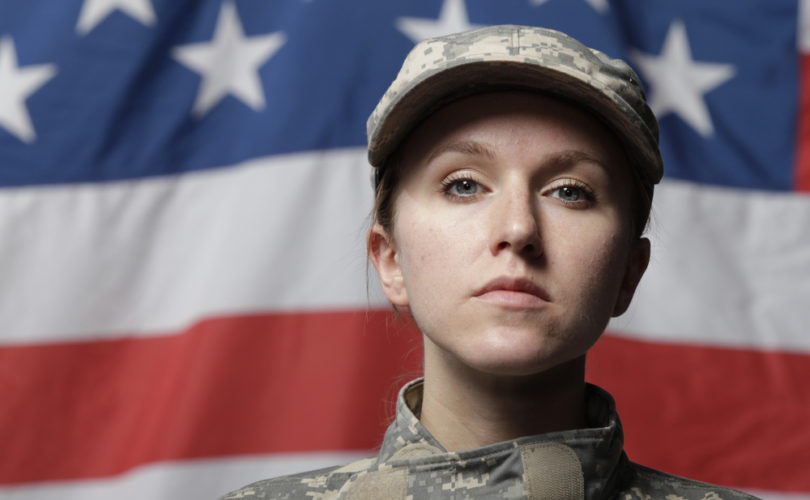 (Live Action) – A new bill introduced in the House would allow for the government funding of abortion in the military by having the Department of Defense pay for abortions, and would also allow abortions to be committed on base. Currently, federal law prevents Tricare, the health insurance provided to service members and their families, from covering abortion.

Introduced by Rep. Jackie Speier – who has compared abortion to wisdom tooth removal and who claims she had a second trimester abortion that actually sounds like a natural miscarriage – H.R.2085, or the Military Access to Reproductive Care and Health (MARCH) for Military Women Act, amends the ban on using Department of Defense funding on committing abortions and allows abortions to be committed on base.

Speier, who serves as chair of the House Armed Services Committee’s military personnel subcommittee, sponsored the bill, along with 81 House co-sponsors.

Military.com reported that Kirsten Gillibrand, Jeanne Shaheen, and Richard Blumenthal, all members of the Senate Armed Services Committee, are planning to introduce a similar bill in the Senate.

“If Roe is overturned, abortion will quickly become illegal in 26 states,” Speier claimed in a statement. “Women serving in the military experience unintended pregnancy rates 22 percent greater than civilians, and many are stationed in states that will overturn Roe,” he added.

Sen. Blumenthal continued: “Many also don’t have the luxury of traveling off-base, thousands of miles and for days at a time, to pay out of pocket to receive the care they need and deserve. The fallout for our servicemembers and their families will be catastrophic, as is the threat to our military readiness, morale, and unit cohesion.”

The senator said that “abortion care isn’t a privilege, it is standard health care essential to one’s ability to determine their own destiny. One in four women in America will have an abortion in her lifetime, and 59% of women who have abortions are already mothers. Our brave servicemembers deserve the same access to basic health care as the people they are fighting to protect.”

Our service members should have the constitutional right to reproductive health care, no matter where they are stationed. The MARCH Act will empower the Department of Defense to protect the constitutional right for service members to make the decisions they need to safeguard their health. Not only would this legislation remove outdated statutory bans that prevent access to reproductive care, but it would also facilitate the development of a healthy force with access to safe health services.

These statements imply that a woman who becomes pregnant in the military is expected to have an abortion in order to ensure “military readiness, morale, and unit cohesion” as well as “the development of a healthy force.” Female service members have higher rates of unplanned pregnancy than the general population, and the expectation is that the woman will have an abortion for the sake of her career.

“One of the stigmas attached to a female getting pregnant on a deployment is the assumption that she did it on purpose,” Bethany Saros, who got pregnant while deployed to Iraq, wrote in an essay for Salon.

“It’s whispered about any time the word ‘pregnancy’ comes up right before or during a combat tour,” said Soros. “The unspoken code is that a good soldier will have an abortion, continue the mission, and get some sympathy because she chose duty over motherhood. But for the woman who chooses motherhood over duty, well, she must have been trying to get out of deployment.” (emphasis added)

— Article continues below Petition —
Tell the Secretary of Defense: "Pride Month" is making our country weaker
Show Petition Text
10024 have signed the petition.
Let's get to 12500!
Thank you for signing this petition!
Add your signature:
Show Petition Text

“As some politicians continue to dismantle reproductive rights in states across the country, it is critical that Congress support our servicemembers and their ability to access to sexual and reproductive health care no matter where they are stationed,” Alexis McGill Johnson, president and CEO of Planned Parenthood, said.

“Abortion is health care, plain and simple,” added Johnson. “We thank the leadership of the Pro-Choice Caucus and the Democratic Women’s Caucus for standing with our servicemembers and advocating for abortion access for all.”

The reality is that abortion is not health care because intentionally killing human beings is the opposite of health care. Female service members already face incredible pressure to abort when they experience unexpected pregnancies.

There is a shameful lack of support for female service members who are pregnant, especially if they are unmarried and the pregnancies were not planned. Requiring abortions to be funded by the Department of Defense and available on-base will only exacerbate the already outstanding pro-abortion pressure on these service members.

What these women actually need is support, so they aren’t feeling forced between their child and their military career. If Speier and these pro-abortion politicians truly want to support female service members, they would work on laws ensuring better protection — but making it even easier for them to be coerced into abortion doesn’t benefit anyone but the abortion industry. And yet again, it’s at the expense of the women they’re claiming to support.