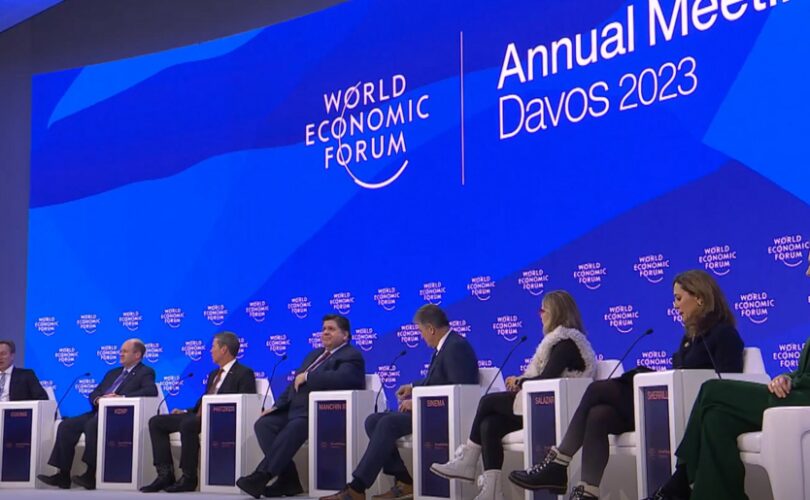 (LifeSiteNews) — The D.C. “cartel,” as Steve Bannon likes to call it, was well-represented at the World Economic Forum’s (WEF) annual meeting in Davos this week.

Seven U.S. lawmakers from both the Democrat and Republican parties, including one independent, pushed Deep State talking points about Ukraine, immigration, and the “radical right” during a panel session Tuesday that felt more like an infomercial meant to reassure concerned investors that America First patriots do not pose a serious threat to the Swamp’s control of what goes on in our nation’s capital.

Given the panelists’ different political parties – as well as life experiences and genders – attendees likely thought they were going to see a spirited debate over America’s role in an ever-changing world. What they witnessed instead was an uncritical roundtable of cheerleaders pushing long-standing Uniparty policy goals.

Sen. Manchin proudly told Brende, who also serves as the WEF’s president, that the “commitment that we have [to Ukraine] is unending.” I’m “going to stay with Ukraine until they are victorious.” If only Manchin’s commitment to the unborn was unending!

“My vote is to continue with the Ukrainians until they win,” the Miami-born Republican Salazar declared. What if that’s another five years, Congresswoman? Just how many hundreds of billions of dollars will the U.S. have to send to ensure this victory happens? What does victory look like anyway?

There is “broad agreement” on “supporting Ukraine,” the pro-LGBT Chris Coons remarked. “We have a responsibility… to continue to be an exporter of values and stability.” What about the duty to bring stability to crumbling towns and impart values to children in schools across our country, senator?

It’s truly astonishing that America’s most prominent lawmakers have yet to learn from the failed nation-building quagmires previous politicians have ensnared the U.S. in overseas. They’re literally pushing the world to the brink of nuclear war by escalating the Ukraine conflict with their reckless rhetoric and blind support for Zelensky.

On immigration, all panelists more or less agreed that an increasing number of foreign workers should be allowed to enter America, a policy that’s been backed by the woke U.S. Chamber of Commerce for decades.

America can’t remain the world’s number one economy “if we don’t have hands,” Salazar stated. “We need those hands” to work here. She also called for amnesty for millions of illegal immigrants.

Sinema echoed those remarks by insisting that “the best and the brightest… whether it be farm workers” or others, should come here too. America needs to “hire talent,” she added.

Sounds great, but why can’t American companies hire American talent to work for them? There’s plenty of open jobs right now just waiting to be filled by those who are out-of-work. Non-citizens should not be given preference ahead of those who were born here.

Bipartisanship was also a focal point of the panel’s conversation. Almost all who spoke on it made sure to take a dig at conservatives and to call for finding more “common ground.”

“My friend [Kevin McCarthy]” made concessions to the “radical right,” Sinema lamented. “Most election-deniers lost” their midterm races.

“We find ways to work together,” the stubbornly pro-abortion Governor of Illinois, J.B. Pritzker, said. “But it is very hard… especially when you have people who… believe in space lasers, you know.”

Manchin, meanwhile, bizarrely placed blame for the lack of bipartisanship in Washington on the First Amendment, of all things.

Joe Manchin argues against the First Amendment at the World Economic Forum meeting in Davos:

“The problem we have is the open press system and basically all the platforms.” pic.twitter.com/c8pX3WN34N

“The problem that we have is the open press system, and basically all the platforms,” he stated. “So, if you’re able to have five platforms, social platforms, you can basically personify the extremes – somebody who is extremely right or extremely left, and it seems that is the majority speaking. They’re not the majority, but they’re basically driving everybody to make a decision.”

It’s not clear which “five platforms” Manchin was talking about. Or what else he was trying to say. One wonders if he’s ever read the Federalist Papers, or the Twitter Files which clearly show Facebook and Twitter were the ones guilty of taking an “extremely left” position and then censoring anyone and everyone who didn’t do the same. Talk about bipartisanship!

Kemp was the only panelist who came off as an original thinker. Instead of joining in on the criticism of his fellow conservatives, he ably pivoted from one of Brende’s snide questions and gave a great answer on the problem of drugs pouring across America’s southern border. He also touted his jobs record and boasted about how he worked to open schools after COVID. Despite being criticized for attending the event, Kemp did an admirable job overall.

“America (Un)Bound” will be marketed by Western media outlets as an example of how a diverse group of politicians from varying political backgrounds can come together and, in front of the entire world, put aside their differences to show that the United States is the planet’s leading superpower that’s still worth backing.

In reality, the panel was a boring, carefully scripted PR stunt designed to show international elites the D.C. Uniparty is still very much on their side, and that the nationalist, anti-globalist uprising that first appeared in 2016 with Donald Trump (and has not yet gone away), will continue to be treated with ridicule and contempt until things go back to the way they were before he came along.