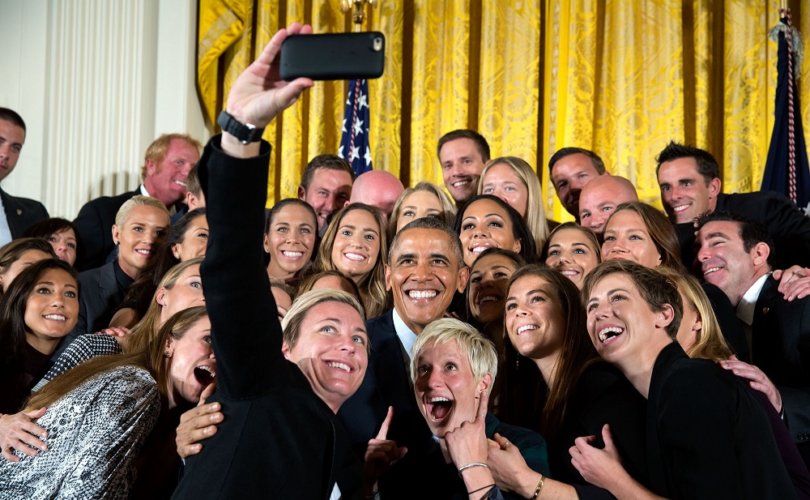 July 15, 2019 (American Thinker) — The idiom “for God and country” (pro aris et focis) has been around for quite some time. Its premise speaks to those things that are of greater import than self. It speaks of honor and humility — honor for God (the Creator of all things) and of country (a people who maintain national, or common interests).

Many military veterans past and present have fought under this banner (or “for God, family, and country”), as it provides a reminder to the soldier in the heat of battle that he is fighting not for himself, but for his loved ones, for his country, and for the Lord God Almighty.

Enter Megan Rapinoe, the captain of the United States Women's National Soccer Team. What could have been a victory for God, family, and country, was reduced to self, her radical leftist political ideology, and perhaps her sexual proclivity, lesbianism.

The USWNT victory could (should) have been a victory for the U.S. and for U.S. women's (and girls') soccer. Megan Rapinoe, through her selfish antics, her hatred for Donald Trump and the plurality of citizens who support our president, and her insistence that her being homosexual was integral to our teams' success, ruined what otherwise might have been a great opportunity for the women's game.

One must wonder how many of the team's 23 or so players, and dozen or so coaches, disagreed (vehemently) with Megan Rapinoe in her vulgar spat with the president and her self-serving antics both on and off the field but were cowed to silence for fear of reprisal, from Rapinoe, from Jill Ellis (their gay coach), or from the USWNT sanctioning body. Would a player dare speak out in support of America or our president?

How many of us have demurred to speak out in the workplace as leftists spout their ideological garbage?

Megan Rapinoe is a prototypical leftist. Advance the Left's agenda, consequences be damned. Isolate and attack anyone who disagrees with their radical agenda and use their vast network of activist resources to target dissenters from leftist dogma.

Sport is (was) honor. Honor for the game. Honor and respect for one's teammates and club (country). Honor for one's opponent. Suit up, join your mates, take the field, go hard from whistle to whistle, and play to win. At the end of the match, enjoy your triumph, but never, ever disrespect your opponent, the game, or the name on the front of your jersey.

The president took the high road in their victory, tweeting, “Congratulations to the U.S. Women's Soccer Team on winning the World Cup! Great and exciting play. America is proud of you all!”

The ball, as they say, is in the U.S. Women's National Team court. Will they find humility in their win or continue to serve themselves (and a radical leftist agenda)? I'm not a betting man, but if I were, my money would be on the latter.