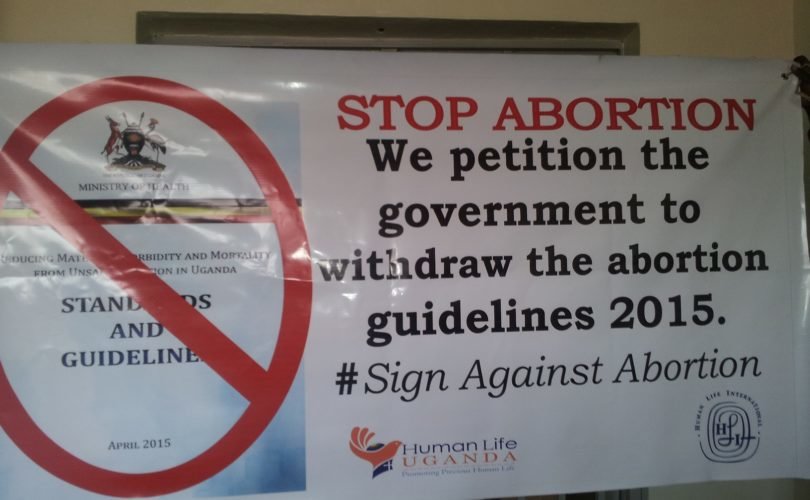 February 5, 2016 (HLI) — The Month of January has been a very busy one for HLI Uganda. Despite many pro-life victories over the last several years, the pro-abortion forces are closer than ever to achieving their goal of a vote on a bill that would greatly expand legal access to abortion, and we are seeing increased pressure on pro-life activists. This pressure led to a very troubling series of events for our team, though it has not stopped our efforts. Let me explain.

The population control cartels have been after Uganda for a long time. Americans can identify with the corruption of politics, where money quietly comes from wealthy persons who want the government to perform a certain way, and who over time slowly achieve their goals. In Uganda, we have even fewer checks on such corruption, which makes us vulnerable to Western elites who are concerned that we are having too many children.

You see, here, we still value children, seeing them as a gift from God and a form of wealth, especially since due to our great respect for elders we rely on children to care for us as we age. Here, the priority is on family rather than the government to care for those most in need, which is why we fight so hard to defend life and family.

In opposition to the abortion bill, which is based on last year’s Ministry of Health Abortion Guidelines, HLI Uganda has launched a campaign appealing to the people to sign petitions and inform their neighbors. These guidelines, which are practically identical to similar documents in other countries that are written by Western pro-abortion NGOs like Ipas and International Planned Parenthood Federation, are intended to mandate that children as young as 10 years be put on contraceptives and be given access to ”abortion services.”

The first week of our advocacy was challenging as our opponents, who now enjoy great access to our political leaders, kept calling police to interrupt the campaigns. Seeking advice on the matter, I was advised by a member of the Ugandan NGO board to make sure that we register with their organization.

After registration, we were advised to write to the Inspector General of Police (IGP) to notify him that we are going to advocate against abortion and to collect signatures in order to petition the government and Ministry of Health to withdraw the abortion guidelines, and to reject the upcoming abortion bill, which we promptly did.

Two hours after the resumption of the campaign last Friday, the three volunteer team members were arrested during an event at the market in Busega (a suburb of Kampala) and charged with “inciting violence.” The charge document does not indicate the persons against whom violence was incited, or what incitement was expressed. When I arrived at the police station to appeal for the release of the team members, I was told by the officer among other things that “The problem is that you want to eat your money alone, you do not want to involve police.”

Welcome to Uganda. Interestingly, after reviewing our campaign with the officers we were told that there was no problem. Long story short, the team members were released on police bond the same evening.

Fortunately none of the team members were physically hurt, but the situation was very emotionally difficult because they were embarrassed with the arrest on no good grounds. The police said they were informed by concerned citizens that our team members were calling upon the public to incite violence. When I asked about the concerned citizens who did give them information, I did not get a straight answer, though we have a general idea.

Although we were advised to postpone our campaign until after the February 18 political elections, we have already resumed sharing information and getting signatures, and our partners continue to reach out to politicians and coordinate nationally. There is no time to lose. The Western-funded NGOs who promote abortion have had great success at the level of politics, including writing the Abortion Guidelines and the bill whose consideration is imminent, but they have not yet been able to corrupt the heart of the Ugandan people, most of whom just want a better life like our brothers and sisters in America.

We have also watched with interest as pro-life heroes David Daleidin and Sandra Merritt have suffered legal troubles for trying to expose the evils of the abortion industry in America. From a certain perspective, such arrests are a good sign, a blessing in disguise, in part because they highlight that the cases against the pro-lifers are so weak. This is what the powerful do when they are scared.

We do not, however, return fear for fear. We do not have their power, but they do not have God’s power. God is most certainly watching, and He is always present, offering His grace to His faithful ones.

It also does not hurt to have some publicity – though the media rarely tells the story truthfully, many will see the injustice and wonder why the powerful have to resort to such tricks.

We will pray for them as we ask for your prayers for our team as well, and for our success in stopping the abortion bill in its tracks. It is much better to stop a Roe v. Wade catastrophe than it is to try to reverse it or lessen its effects.

Thank you for your prayers and support for your brothers and sisters in Uganda!