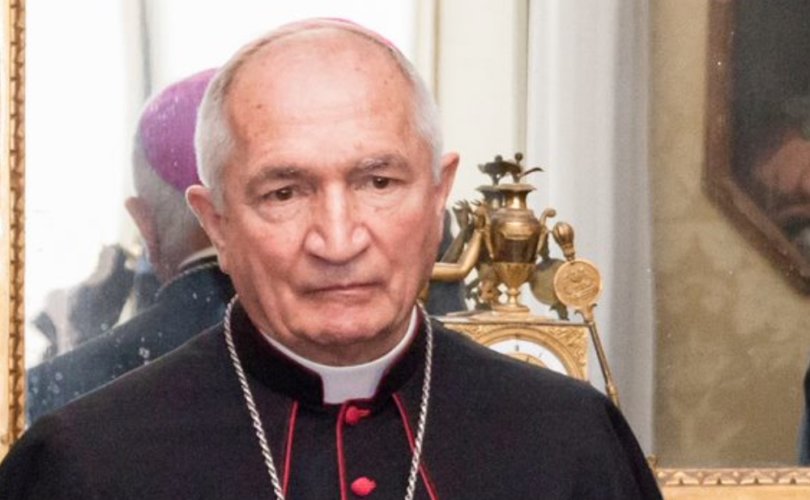 ROME (LifeSiteNews) — Pope Francis’s delegate to the Order of Malta has refused to admit its appointed representative to a committee on the Order’s constitution.

The committee met this week in a two-day session which began Tuesday.

The session was supposed to be attended by Knight of Malta Marwan Sehnaoui, the president of the Order’s Lebanese association. He was appointed last week by the Order to serve as the chairman of the steering committee on constitutional reform.

However, Cardinal Silvano Tomasi, whom Pope Francis nominated as his special delegate to the Order in 2020, has repeatedly refused to allow Sehnaoui to attend the two-day meeting.

#BREAKING: Pope Francis’ delegate to the Order of Malta has locked the knights’ chosen representative out of a two-day meeting on their future constitution. https://t.co/NfySAXIgg6

Sehnaoui reacted in a Tuesday letter saying that the cardinal’s decision to exclude the order’s appointed representative “is clearly a direct attack on the sovereignty of our Order.”

Tomasi, on the other hand, criticized the Order of Malta’s decision to appoint a representative without seeking his agreement and accused them of “moving unilaterally.” He also described the Knights’ decision to circulate feedback on his draft constitution among themselves as a “questionable procedure.”

The incident is the latest development in an ongoing power struggle between the Vatican and the Order of Malta, the only Catholic religious order that is also a sovereign entity in international law. The Sovereign Military Order of Malta (SMOM) has the ability to maintain full diplomatic relations with nations, and a seat as a permanent observer at the United Nations.

The controversy comes just a week after Tomasi promised in writing that “that it was never the intention of this commission, nor of the Holy Father, to undermine the sovereignty of the Order, which will be totally preserved.”

But his exclusion of Sehnaoui from the meetings, which the knights perceive as an abuse of authority, will not have helped to convey this message.

The cardinal’s show of power appears to have brought further damage to the already shaky relationship between the Order and the Vatican.

Sehnaoui said he met with Pope Francis in a private audience on Monday to help resolve the situation. He apparentlyexplained to the Pontiff that “the majority of the people involved in the current commission do not have a thorough knowledge and understanding of the specificities of our Order and its activities.”

Though Sehnaoui said he felt “hopeful and confident” following his meeting with Pope Francis, Tomasi still refused to let him attend the meeting and invited Riccardo Paterno the president of the Order’s Italian association to attend the meeting in his stead.

Peter Szabadhegy, vice-chairman of the Knights’ steering committee, said he was “astonished” to find that Paterno had been admitted in Sehnaoui’s stead and demanded an explanation from Cardinal Tomasi which was not forthcoming.

To show his disapproval, Szabadhegy left the meeting.

“Under these circumstances, I consider that our Order is not respected, that our dignity is violated, and our future is in danger,” wrote Sehnaoui on Tuesday.

According to Catholic news agency The Pillar, “Tomasi’s refusal to recognize the order’s own delegates to their own constitutional process is likely to signal a total takeover of the governance of the knights.”

This is only the latest power play by the Vatican in its interference with the micro state. At first, Pope Francis seemed well-disposed to the Order, appointing Cardinal Raymond Leo Burke its Patron in 2014–a move that was, admittedly, a demotion for the then-Prefect of the Signatura, the Vatican’s Supreme Court.

However, in 2017 the Vatican took a decisive role in a power struggle within the Order itself. When its Prince and Grand Master, the late Fra’ Mathew Festing, dismissed the married lay Grand Chancellor, Albrecht von Boeselager, in 2016 for distributing contraceptives and abortifacients through the Order’s charitable projects, the Vatican sided with Boeselager and his allies, fellow German aristocrats. In January 2017, Pope Francis asked Festing who, like all Grand Masters, had taken an oath of obedience to the Pope, to resign.

Boeselager resumed his post as Grand Chancellor, despite strong opposition from within the Order, and declared that Cardinal Burke was “suspended” as Patron of the Order.  Festing was ordered by the now-notorious Archbishop Giovanni Becciu, the Vatican’s temporary delegate to the SMOM and Burke’s replacement, not to attend the election of his successor.  (The order was later rescinded.) Becciu remained Pope Francis’ “Special Delegate” to the SMOM until November 2020, when the scandal-plagued prelate, now a Cardinal, was replaced in that role by Tomasi.

LifeSiteNews has learned that one of the tensions within the SMOM, quite apart from lay dissent on Church teachings on matters touching on marriage and the family, is that leadership in the Order rests primarily with Knights who have taken vows of poverty, chastity and obedience, and thus are male religious. This leaves leading lay members of the Order, who in Britain and Europe are primarily of aristocratic lineage and often have considerable wealth, out of the top ranks. However, this most recent move suggests that Pope Francis is not as firmly on the side of wealthy, aristocratic German laymen as they may have hoped; male religious, as we have seen in recent years, are much easier than laymen to control.