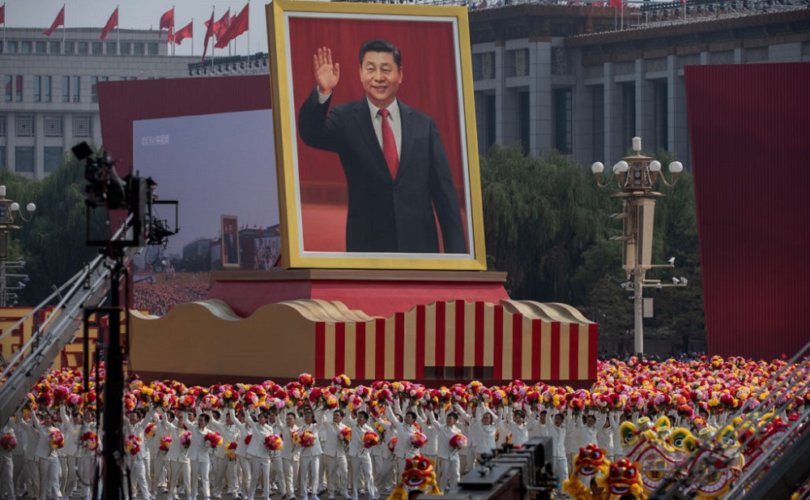 A giant portrait of Chinese President Xi Jinping is carried atop a float at a parade to celebrate the 70th Anniversary of the founding of the People's Republic of China in 1949 , at Tiananmen Square on October 1, 2019 in Beijing, China.Kevin Frayer / Getty Images

January 13, 2019 (The Catholic Thing) — China is a large, strange, complex, contradictory thing, even before you get to the large, strange, complex, contradictory, and murderous form of Communism that has come to dominate its various peoples. No one understands it very well. But those closest with a real say — the Hong Kong protesters who know what submission to Beijing means, and Taiwanese voters who roundly resisted mainland pressure in elections this weekend — are united in believing that China is simply not to be trusted.

It’s worth trying to think through why the Vatican seems to have a different view.

Living in Washington, I’ve met any number of sincere and dedicated public figures, as well as many scamps, scalawags, con men, and outright liars. But the few encounters I’ve had with Chinese officials set the gold standard for shameless lying — particularly about religious persecution.

Even secular journalists with little love for religion routinely report these days on China’s increasing outrages against believers. Their reports tend to focus on religious groups Western secularists favor — the 1 million Uighur Muslims in China, for example, who are now being brainwashed in “re-education” camps.

Journalists are much less interested in China’s 100 million Christians (Protestants and Catholics). Or how religious bodies are being brutally “sinicized,” even forced — incredibly — to re-write their scriptures to bring them in line with Communist ideology.

Last week, a Congressional committee on China issued a blistering report, which began: “Observers have described religious persecution in China over the last year to be of an intensity not seen since the Cultural Revolution.” It documented how not only “foreign” religions (i.e., Christianity and Islam) are being squeezed, but even traditional faiths like Buddhism and Hinduism are under a full-court press against religion now.

Just the next day, Pope Francis gave his annual address to diplomats, and did not utter a word about Chinese persecution. Indeed, his 2019 address to the diplomats claimed that the Vatican’s Provisional Agreement with China “is the result of a lengthy and thoughtful institutional dialogue that led to the determination of certain stable elements of cooperation between the Apostolic See and the civil authorities.” [Author’s Correction: An earlier version of this column mistakenly attributed this quotation to the 2020 address. — RR]

How is such stone-blindness possible?

There’s an answer perhaps in A Hidden Life, Terrence Malick’s moving new film about the martyrdom of Franz Jägerstätter, an Austrian Catholic whose conscience would not allow him to swear allegiance to Hitler. I’ve had an interest in him since I wrote my book The Catholic Martyrs of the Twentieth Century.

A mea culpa: He was one of my very favorites among many modern heroic and holy figures, almost totally ignored by historians. But I had to write about him as a historian myself, with only the broad outline of his personal struggles as he thought about how his wife and children would have to cope without him. How his friends and fellow villagers regarded him as a traitor (they, of course, felt guilty that they had compromised with evil and took it out on him and his family). How, as the Nazis never tired of telling him, his death would change nothing; no one would ever know about it; his stubbornness would only bring suffering to those he loved.

Some have criticized the slow, lengthy treatment of these matters in the film. But how else to convey what it’s really like to live under relentless persecution, day after day, and deal with tortures and doubts to a degree that would drive most of us mad?

But even that was not the worst. Franz’s pastor and bishop (Joseph Fliesser of Linz) nervously suggested he be obedient to public authorities, as St. Paul counseled (Rom. 13). These men were not monsters, or Nazi shills. They did not intend to destroy the Church, but thought that by passively going along they were actually saving as much of the Church as could be saved, in terrible circumstances. There was also personal cowardice, of course, mixed in with the other motives. They were wrong, massively wrong, as anyone can see today.

Something similar is going on in China right now. The Vatican, by its accord with an evil government, has essentially told Chinese Catholics that they are wrong to remain independent of a regime they see quite clearly is murderous and hell-bent on forcing the Church to be re-defined along lines that will make it harmless to government interests.

Reliable sources say that the same instruments of manipulation officials used so effectively in imposing the “one-child policy” are now carrying out the sinicization of religious bodies.

So where are the bold Catholic voices protesting the intimidation and taming of the Church? We have Hong Kong’s retired Cardinal Joseph Zen Ze-kiun, who just issued a heartfelt letter to all the Catholic Cardinals, which ends on a personal note to each of them, “Your Eminence, can we passively witness the murder of the Church in China by those who should protect and defend her from her enemies? Begging on my knees, your brother. . .”

There’s been silence about this letter — to say nothing of the horrors it describes — at the highest levels in the Vatican, i.e., Cardinal Parolin, the Secretary of State, who worked out the Provisional Agreement with China, and Pope Francis himself.

We’ve heard from Parolin that we must be patient and keep up hope, but the facts on the ground are beyond dispute: the Church has been had. The belief that “dialogue” — which like “diplomacy” has become something of an idol in certain internationalist circles — is possible with certain forms of evil will someday be seen, as is clear already to many of us, as a foolish experiment that many Chinese — and not only Chinese Catholics — will pay for with their liberties and lives.

And it won’t stop there because other malefactors around the world are watching. If you have to suffer and perhaps die anyway, better to do so like Franz Jägerstätter — as he told his captors, as a free man, although he was imprisoned — than to accept a false peace, which is, sooner or later, only the peace of the graveyard.