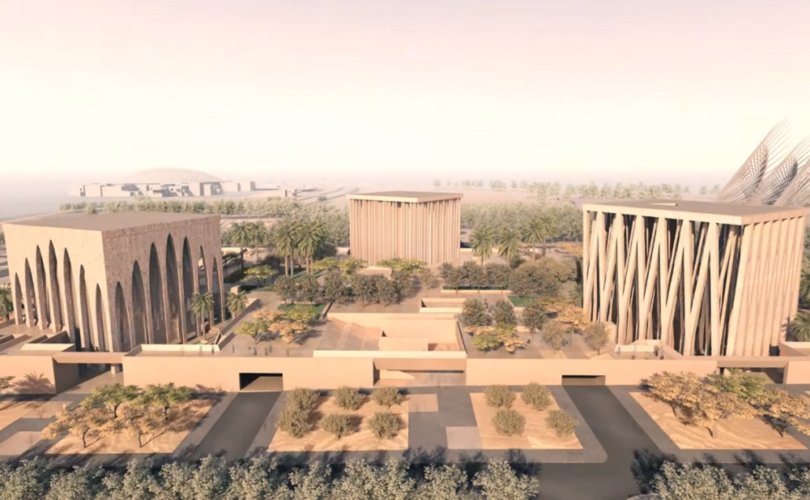 September 25, 2019 (LifeSiteNews) — The “Higher Committee to Implement the Document on Human Fraternity” signed in Abu Dhabi in February by Pope Francis and Sheikh Ahmed el-Tayeb of Al-Azhar University, Cairo, met in New York last week in the shadow of the United Nations yearly national assembly for the second time in two weeks. Its most spectacular act was the unveiling of the design for the “Abrahamic Family House,” to be built on Saadiyat Island in Abu Dhabi, the capital of the United Arab Emirates, as a multi-faith complex giving equal space to a synagogue, a church, and a mosque.

Speaking of the so-called “Abrahamic religions” as variations on a single theme is deceptive. The Hebrews, who worshiped the true God, received the true promise of the Messiah but did not recognize Him. Jesus Christ brought the full revelation of the truth, revealing that the God of the Bible is Father, Son, and Holy Spirit — and this revelation is complete so that nothing can be added on Earth to the deposit of the Faith. Islam violently rejects the truth about the Holy Trinity and rewrites and corrupts the inspired Holy Scriptures, giving the letter of the Koran a form of divine status since it is deemed “uncreated.”

The Abrahamic Family House initiative has been given wide coverage by the official Vatican News service and has been blessed, so to speak, by the Catholic Church through the presence not only of Pope Francis’s personal secretary, Monsignor Yoannis Lahzi Gaid, but also that of the committee’s president, Cardinal-Elect Miguel Ayuso Guixot.

Hundreds of people from multiple religious traditions gathered for the event that was held at the New York Public Library on Friday, September 20.

While the first meeting of the Higher Committee (“higher” than what, one is tempted to ask) took place on September 11 in Rome to mark the 18th anniversary of the terrorist attack against the Twin Towers in New York, the second meeting was organized deliberately to coincide with the 74th Session of the United Nations in order to “highlight” the Abu Dhabi document’s “global reach,” according to committee member Judge Mohamed Mahmoud Abdel Salam, as quoted by Sr. Bernadette Mary Reis for Vatican News.

“The Committee, the Judge said, is willing to work with any nation who is open to the ideals expressed in the Document. He added that the first steps have been made with the UN Secretary General toward possible adoption of the Document by the United Nations. The Secretary General ‘is going to request member States to include the principles contained in this historical document in their local legislation,’ the Judge said,” wrote Sr. Bernadette.

Many interfaith initiatives saw the light in the wake of the September 11 attacks, including the Alliance of Civilizations, created in 2005 by Spanish socialist former prime minister Zapatero and co-sponsored by Turkish prime minister Recep Tayyip Erdoğan, and launched by the U.N. that same year. In Kazakhstan, the Congress of the Leaders of World and Traditional Religions has been meeting every three years since 2003 with similar objectives: the rapprochement of cultures and civilizations, complete with heavy Masonic symbolism. Cardinal Francesco Coccopalmerio was the Vatican’s official representative at the latest meeting in Astana in 2018.

But the Abu Dhabi document marks a step forward in implicating the Catholic Church at the head of interfaith initiatives while at the same time working to give the United Nations the upper hand in obtaining a global alignment regarding religious faiths in the name of world peace. As many U.N. documents show, diversity of religions and traditions has long been accused of being the main threat to human fraternity and world peace (an analysis that spectacularly omits the fact that several hundred million people were massacred in the 20th century in the name of atheistic communism).

Pope Francis recently said on his flight back from Antananarivo, Madagascar that it is our duty as “humans” to “obey” the United Nations: “I would like to repeat what the Doctrine of the Church says about this: When we acknowledge international organizations and we recognize their capacity to give judgment, on a global scale — for example the international tribunal in The Hague, or the United Nations. If we consider ourselves humanity, when they make statements, our duty is to obey. It is true that not all things that appear just for the whole of humanity will also be so for our pockets, but we must obey international institutions. That is why the United Nations were created.”

The Declaration on Human Fraternity is an obvious echo of this general line of thought, and it certainly owes its weight to having been signed by the pope. However embattled the Catholic Church may be due to the sexual abuse crisis, when proclaiming globalist thought, Pope Francis is internationally recognized as a moral authority.

Building an egalitarian place of worship for Jews, Christians, and Muslims is a case in point. It is not clear whether the Christian edifice will be Catholic; it is described as “Christian” on the Vatican News site.

The model of the future Abrahamic Family House — note the singular; it is a sign that the three religions are being considered as elements under one and the same God — is particularly revealing. Presented as a 3D model and also described in a short film projected for participants at the New York meeting last Friday, it boasts three cubic “temples” (for want of a better word) built on exactly the same model regarding volume and orientation, with different abstract decorations and interior design in order to make them appropriate for the different types of worship they will catering to.

Remarkably, the film shows that the Christian or Catholic “cube” is designed not to receive images of Christ and the saints — only a very simple cross, not a crucifix, hanging over an altar. The United Arab Emirates are Islamic, after all… And the initiative for the construction came from Abu Dhabi’s crown prince, Mohammed bin Zayed Al Nahyan, who announced it in February just after the signing of the document.

The three cubes will be set in a triangle reminiscent of the three dots indicating membership in Freemasonry. The mosque, decorated with arches; the church with upright lines; and the synagogue with triangles have no external feature indicating their religious identity. Only the synagogue has an opening in the roof: a clear-cut triangle, according to the plans unveiled last Friday.

This portrays what was said by committee member Mohamed Khalifa Al Mubarak in New York, according to Vatican News’s report: the message is “to simplify faith back to its simplest form. To simplify life to what all our religious books basically say: be good to thy neighbor, love thy neighbor, help thy neighbor. In a world that is so connected, in reality, we have been so disconnected. Projects and initiatives like the Abrahamic Family House, and there will be many more to come in the future, will bring people together. It’s a dream come true where the people of the UAE, a people who favor tolerance, have the opportunity of sharing that with the world.”

Faith brought back to its simplest form means natural religion, without dogma (a Masonic prerequisite) and of course without Revelation. It is no less than a departure from Truth, a way of turning one’s back on Truth in view of horizontal “fraternity.”

Equality is likewise portrayed by the architectural project. In New York, reports Vatican News, “[c]ommittee member Msgr Yoannes Gaid explained that the core of the Document is that all of us are brothers. Equality is based on this truth, he added, an equality that thus extends to duties and rights as well. Freedom, Msgr Gaid emphasized, is actually based on non-violence. ‘Violence,’ he said, ‘is against faith and citizenship’.”

But here, there is clearly confusion between the brotherhood of man and the supposed equality of religions, which can be affirmed only if truth is negated.

The architect chosen to build the Abramic Fraternity House is a British citizen from Ghana, David Adjaye, 51, who has already signed many modern buildings from Washington (the National Museum of African American History and Culture) to Moscow. Gratified with a British knighthood, this mainstream modern architect was influenced by “soviet aesthetics” according to Jeune Afrique. He is the essential globetrotter, with offices in New York, London, Doha, and Accra.

About the Abramic Family House, Adjaye Associates wrote on their website on September 23: “Adjaye Associates have been announced as the winner of the competition for the landmark project, The Abrahamic Family House on Saadiyat Island in Abu Dhabi. The Abrahamic Family House commissioned by The Higher Committee for Human Fraternity, is a collection of three religious spaces, a mosque, a synagogue and a church, which sit upon a secular visitor pavilion. The project is one of the first initiatives set by The Higher Committee, a new body, who are overseeing the implementation of the ‘Document of the Human Fraternity’ at both regional and international levels. The landmark project hopes to embody the relationship between the three Abrahamic faiths whilst providing a platform for dialogue, understanding, and coexistence between their religions.”

What do we learn from this? What links the religions from the architect’s point of view, and is at their very base, is “a secular visitor pavilion.”

The official communiqué of the Higher Committee for Human Fraternity puts it this way:

Located on Saadiyat Island in Abu Dhabi, the Abrahamic Family House will serve as a community for inter-religious dialogue and exchange, nurturing the values of peaceful co-existence and acceptance among different beliefs, nationalities and cultures.

This landmark initiative will be a place for learning, understanding and worship — open to all and a true reflection of the UAE’s values of tolerance and hospitality.

Within each of the houses of worship, visitors will have the opportunity to observe religious services, listen to holy scripture and experience sacred rituals. A fourth space—not affiliated with any specific religion — will serve as a center for all people of goodwill to come together as one.

Here the oneness of humankind is definitely not “in Christ,” in whom the baptized become members of one another.

That the philosophy of the project is based on creating a new way of thought was made clear by Msgr. Gaid in New York. He said (as quoted indirectly by Sr. Bernadette on Vatican News) the new landmark will signify “a transformation in human history because … it will turn what has been used in the past as a means of division among peoples into a point of contact.”

A “transformation in human history” is an ambitious objective, indeed, especially for a Catholic prelate who knows that history was in fact definitively transformed by the Incarnation, Passion, and Resurrection of Our Lord.

On the same note, committee member Mohamed Khalifa Al Mubarak called the Abu Dhabi document the “most important declaration signed in the modern day,” according to Vatican News.

Judge Mohamed Mahmoud Abdel Salam saw the initiative as proof of the determination of Pope Francis and Sheikh Ahmed el-Tayeb “to achieve happiness for all humanity no matter the religion or nationality.”