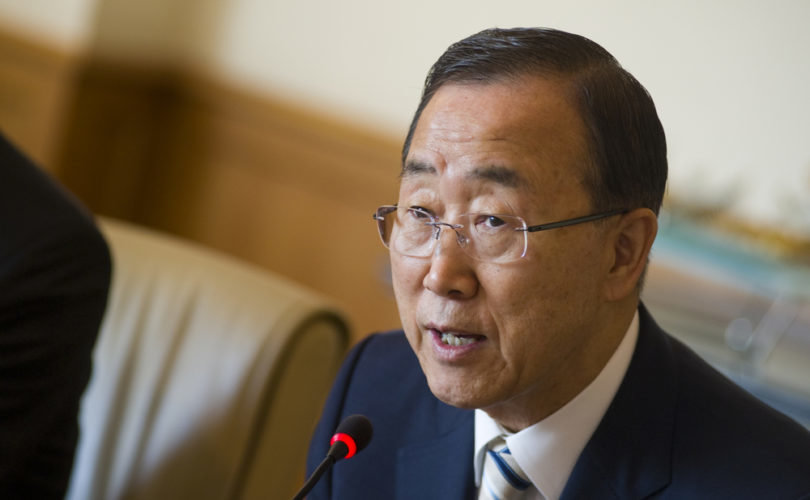 April 28, 2015 (LifeSiteNews.com) — Two of the world's leading pro-abortion advocates were addressing a Vatican workshop on the environment today.

At the same time, a press conference at the Palazzo Cesi, in Rome, organised by the Heartland Institute, was addressed by two leading SPUC officials on behalf of Voice of the Family, warning that the population control lobby was advancing its agenda by means of the workshop held today by the Pontifical Academy for Sciences.

The following statement was delivered by Patrick Buckley, UN envoy of the Society for the Protection of Unborn Children, who was joined in Rome by Maria Madise, SPUC's international manager and manager of Voice of the Family:

Voice of the Family statement on the workshop “Protect the Earth, Dignify Humanity. The Moral Dimensions of Climate Change and Sustainable Development” held at the Pontifical Academy for Sciences, 28th May 2015

We wish to express our grave concern at the presence of Ban Ki Moon, the UN Secretary General, and Professor Jeffrey Sachs, Director of the Earth Institute, at the Vatican workshop Protect the Earth, Dignify Humanity. The Moral Dimensions of Climate Change and Sustainable Development held by the Pontifical Academy for Sciences (PAS), Sustainable Development Solutions Network (SDSN) and Religions for Peace on April 28th 2015 in anticipation of the new papal encyclical on the environment.

Ban Ki Moon and Professor Jeffrey Sachs are noted advocates of abortion who operate at the highest levels of the United Nations.

The Vatican workshop aims to “raise awareness and build a consensus that the values of sustainable development cohere with values of the leading religious traditions, with a special focus on the most vulnerable.”

Unfortunately, pro-life and pro-family advocates who lobby at the UN have witnessed the environmental issues become an umbrella to cover a wide spectrum of attacks on human life and the family. These attacks pose an immediate threat to the lives of the most vulnerable – the unborn, the disabled and the elderly – as well as grave violations of parental rights.

In light of the attacks on innocent human life witnessed at the UN under the guise of environmental concerns, we are troubled to note the Vatican workshop’s desire “to help build a global movement across all religions for sustainable development and climate change throughout 2015 and beyond”. This timetable exactly coincides with the negotiations of the Sustainable Development Goals (SDGs) at the UN, which include strong attacks on life and family. The SDG agenda will determine the direction and financial aid for the third world countries for the next 15 years.

Understandably the population control, pro-abortion lobby must be feeling very much empowered by the influence being exercised in the Vatican by two of the culture of death’s leading figures, Ban Ki Moon and Professor Jeffrey Sachs, especially just before the publication of an encyclical on the environment.

Ban Ki-Moon, who is one of the main speakers at the workshop at the Pontifical Academy of the Sciences, has on many occasions promoted the so-called “right” to abortion worldwide. (1) He also issued a controversial new report this year on sexual violence in conflict zones, which was critical of the lack of “safe abortion” in many conflict situations. The directive openly defies the consensus at the UN that abortion is an issue that should be left to individual nations.

Dr Jeffrey Sachs, who is also addressing the meeting, is a well-known international proponent of population control and abortion. (2) Sachs is one of the architects of the millennium development goals and a member of the Executive Board of the Sustainable Development Solutions Network. The Network has proposed draft Sustainable Development Goals (SDGs) which contain provisions that are radically antagonistic to the right to life from conception to natural death, to the rights and dignity of the family and to the rights of parents as the primary educators of their children.

Our concerns relate specifically to Goals 4 and 5.

Goal 4 is to “achieve gender equality, social inclusion, and human rights for all”. The call for an end to preventable deaths of infants and children under the age of 5 excludes unborn children, despite the fact that the Convention on the Rights of the Child in its preamble recognises that “The child by reason of his physical and mental immaturity, needs special safeguards and care, including appropriate legal protection, before as well as after birth.”

Goal 4d, which states “Ensure universal sexual and reproductive health and rights” is completely unacceptable. Such language is routinely used by the international pro-abortion and population control lobby to refer to the legalization of abortion on demand and access for children, without parental knowledge or consent, to abortion and birth control drugs and devices in countries throughout the world. (3)

Goal 5, “Achieve Health and Wellbeing at all ages”, also includes a reference to sexual and reproductive health and family planning. (4)

In the light of all that has been said, it will be clear why Catholic families all over the world are greatly concerned that Vatican institutions may embrace the language of the United Nations, which, on the surface, speaks of protecting the environment while in reality providing cover for an anti-life and anti-family agenda. Any discussion on the environment must stem from understanding that the family, defined correctly, is the key to sustainable development, particularly at this time when the Synod on the Family has been called by Pope Francis to consider problems facing the family.

The family according to article 16.3 of the Universal Declaration (1948) is the “natural and fundamental group unit of society and is entitled to protection by society and the State”.

Furthermore, the Sustainable Development Goals (SDGs) and the post-2015 development agenda must take account of the family; this is, in fact, recognised by the UN Secretary General’s 2011 Family Report. (5)

Accordingly, Voice of the Family proposes that the SDGs should contain a goal to strengthen the family and include realistic targets in that regard.

The holding of this vitally important conference in the Vatican at this crucial time in-between the two family synods and in the lead-up to the publication of the Sustainable Development Goals, and with the participation of these leading international pro-abortion advocates, is all the more worrying in the light of the most recent statement of Hillary Clinton saying, effectively, that opposition to abortion must cease to exist, even in the teaching of the Church.

We wish to place on record our view that, in any international agreement concerning the future of the human family, it is indispensable to assert the obligation for states to provide for the legal protection of the right to life of every human being from the moment of conception until natural death and to uphold the family as the fundamental group unit of society.

(1) In September 2010 at the Human Rights Council in Geneva and Navanethem Pillay, the then UN High Commissioner for Human Rights, launched a report “on discrimination against women, in law and practice, and how the issue is addressed throughout the United Nations human rights system”. In that report they called for the policing of nations worldwide to “address the refusal of physicians to perform legal abortions”

(3) For example, in a speech on October 12th 2009, Wellington Webb, appointed by Barack Obama as special adviser to the US mission to the United Nations, confirmed that the Obama administration will be promoting legalised abortion throughout the world, targeting adolescents in a worldwide abortion drive. The ambassador was speaking at the UN's 15th anniversary commemoration of the International Conference on Population and Development (ICPD). His speech expressly committed the US government to promoting “access to reproductive health commodities and services for adolescents”. Webb stated: “President Obama, Secretary Clinton and Ambassador Rice have all underscored the strong support of the United States for human rights, women's rights and reproductive rights as well as universal access to reproductive health and family planning”.

Hillary Clinton, Obama's appointee as US Secretary of State, had already made it clear that when the US government speaks of reproductive health, it's a term which includes access to abortion. In April, 2009, Hillary Clinton told Congressman Chris Smith at a hearing of the US Congress Foreign Affairs Committee “We happen to think that family planning is an important part of women's health and reproductive health includes access to abortion … ”

(5) “The majority of the Millennium Development targets, especially those relating to the reduction of poverty, education of children and reduction in maternal mortality, are difficult to attain unless the strategies to achieve them focus on the family.” (SG Family Report 2011 (A/66/62–E/2011/4)

“The stability and cohesiveness of communities and societies largely rest on the strength of the family.” (SG Family Report 2011 (A/66/62–E/2011/4)