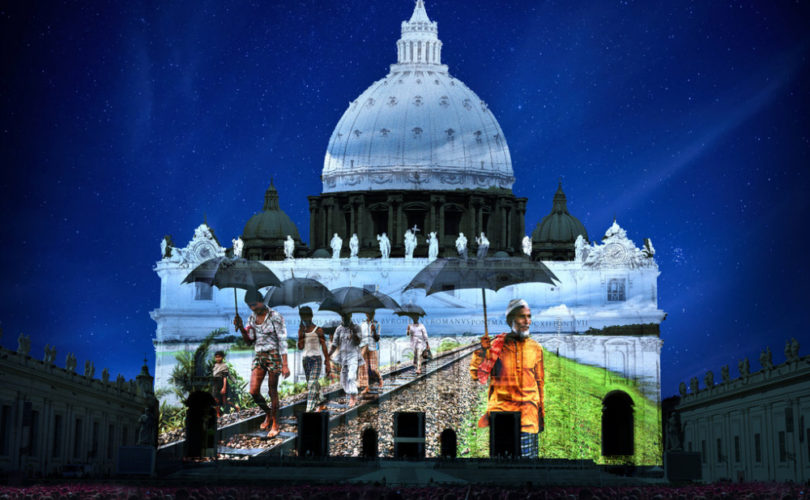 ROME, December 4, 2015 (LifeSiteNews) — The Catholic Church, founded to shed the light of Christ on the world, has quite literally invited the world to shed its light on her. On December 8, the Feast of the Immaculate Conception as well as the opening of the Extraordinary Jubilee of Mercy, Pope Francis has allowed climate-change partisans and population-control advocates to project a light show onto the façade and cupola of Saint Peter’s Basilica in Rome — the most important church in the Catholic world — so as to “inspire change around the climate crisis.”

The show titled “Illuminating Our Common Home” will project onto St. Peter’s “images of our shared natural world” in order to “educate and inspire change around the climate crisis across generations, cultures, languages, religions and class,” states a press release about the event put out by one of the sponsors.

The Vatican’s spokesperson for the event, Archbishop Rino Fisichella, the president of the Pontifical Council for the New Evangelization, called the event “unique…for its genre and for the fact that it is being displayed for the first time on such a significant backdrop.”

“These illuminations will present images inspired of Mercy, of humanity, of the natural world, and of climate changes,” Fisichella said.

Fisichella said that the light show on the Vatican is meant to link Pope Francis’ environment encyclical Laudato si’ with the United Nations Climate Change Conference (Cop21) currently underway in Paris. The Vatican has shown strong support for the conference.  Having the show conclude the opening Year of Mercy celebrations also links the pope’s message about “mercy” to fighting “climate change.”

Life and family leaders around the world remain skeptical about the Paris conference’s alleged agenda of fighting so-called “anthropogenic” global warming, with some warning that “saving the Planet” in climate-speak translates to an anti-human enterprise that targets nations, societies, and families.

The event, billed as “contemporary public art,” is sponsored by organizations named after Greek and Roman pagan gods that push the climate change agenda and by an organization that directly funds abortions in developing countries.

The main financial backer behind the event is the US-led World Bank Group via its Connect4Climate initiative. The World Bank, created in 1945 to rebuild a war-torn Europe, has a long history (here, here, or here) of relentlessly funding abortion and contraception programs in developing nations under the banner of “ending extreme poverty” and “boosting shared prosperity.” Pro-life leaders have denounced the programs time and again as thinly veiled population control programs aimed at reducing populations considered by Western elites to be undesirable. The organization, through its World Bank Spiritual Unfoldment Society (SUS), also has ties to non-Christian religious practices where employees engage in transhumanistic “meditation sessions” that aim at “personal transformation through self-knowledge, understanding, and awakening higher consciousness.”

Vulcan Inc., founded in 1986 by investor and philanthropist Paul G. Allen, is a private company based out of Seattle, Washington, that “strives to create a new kind of future” by “upend[ing] conventional thinking.” The company was deliberately named after the Roman god Vulcan, the deity of destructive fire, whose earliest known shrine existed in Rome at the foot of the Capitoline Hill, close by the Vatican.

Vulcan’s website states that its founder thought the name seemed fitting for a company “whose mission was to find smart solutions for some of the world’s biggest challenges.”

Another partner of the event is Okeanos, an environmentalist foundation begun in 2007 by Dieter Paulmann with the purpose of raising awareness “concerning the various threats our oceans are facing.” The foundation focuses on “planning, financing and implementation of projects that encompass positive change and make a difference.” It rails against what it calls the “sins against climate committed by…the present generation in particular,” which include “man-made environmental pollution (oil slicks, sewage, chemicals, CO2 production)” as well as “noise pollution (overly loud ships’ engines, sonar experiments).”

The foundation is named after the Greek and Roman Titan god “Okeanos” who was held to be the divine personification of the sea whose fish in one hand and serpent in the other signified his gifts of bounty and prophecy.

Obscura Digital, the San Francisco-based organization putting on the actual show, has its name derived from the Latin root meaning “dark.” The company specializes in creating “immersive experiences that will change the way you think about the world around you” using holographic projections, 3D animation, and dynamic visualization.

Obscura’s team of artists, coders, builders, and technologists are masters of manipulation through light and sound. The organization has in the past (here and here) worked on climate change projects with the UN to show the “effect of human enterprise on the environment” and to issue a “call for global solutions.” The organization’s clients include Apple, Google, Disney, Vulcan Productions, Nike, Nasa, Facebook, and UNESCO.

There is much dark and forbidding symbolism behind the event and the organizations sponsoring it that is bizarrely connected to pagan occult practices, the worship of nature, and human sacrifice through abortion and population control.

The show is titled “Fiat Lux: Illuminating Our Common Home.” “Fiat Lux” is the first command issued by God at the beginning of creation: “Let there be light.” Instead of the Church presenting Jesus Christ as the light of the world, secular organizations named after pagan gods are literally “obscuring” the Church through their own dazzling light show. St. Paul warns the Corinthians to be on guard about Satan who he says “masquerades as an angel of light.” It’s as if through this phrase the organizers are symbolically taking the place of God and creating the world anew according to their own image and likeness.

The light show takes place on the most important Marian feast day for Catholics, the Immaculate Conception, in which Catholics celebrate Mary being conceived in the womb of her mother Anne without the stain of original sin. Mary has always been viewed by Catholics as an archetype of the Church since she carried Christ within her as the first tabernacle and then bore him into the world. The light show will project onto St. Peter’s, a building representative of Mary, images of earth and animals on her most important feast day. It is amounts to a crude dishonoring of Our Lady.

The World Bank with its hands bloodied by abortion and population control has no place working with the Vatican on a show that allegedly will reveal to the world images of what Archbishop Fisichella called “mercy, of humanity.” This is simply sick and twisted.

The show will certainly contain many “signs and wonders,” but Catholics must decide for themselves how to interpret them.