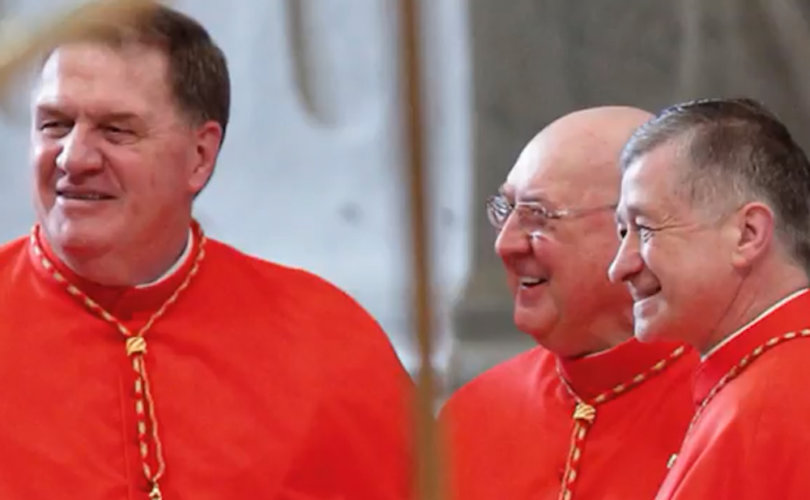 March 7, 2019 (CatholicCulture.org) — As I predicted two weeks ago, the ballyhooed Vatican “summit” on sexual abuse has produced little more than strong statements: statements of the sort that the Catholic laity have come to expect… and to mistrust.

The bishops who gathered in Rome last week did nothing to address the seething anger of the American Catholic laity. They said nothing about the McCarrick scandal, about how it occurred and who was involved. Despite a public plea from Cardinals Burke and Brandmüller, and a separate exhortation by Archbishop Viganò, they said nothing about the influence wielded by homosexual networks in the Vatican.

The bishops did speak about accountability, but they did not take any action to ensure that they would be held accountable. In one revealing confrontation, when a television reporter asked the bishops how they could expect to regain the trust of their people, Cardinal Blase Cupich replied that he would hold himself accountable. But if I have learned that I cannot trust you, you certainly cannot regain my trust by saying, in effect, “Trust me.”

Pope Francis, in his own public statements, repeated his familiar promises that the Church will not tolerate abuse. But, sad to say, the leadership of the Church has tolerated abuse, and the Pontiff gave us no reason to expect a dramatic change.

On the contrary, the statements by Pope Francis created the impression that the Vatican is only now beginning to grapple seriously with a problem that has beset the Church for two decades now. When he offered his reflections for the participating bishops, he began with the suggestion: “To prepare a practical handbook indicating the steps to be taken by authorities at key moments when a case emerges.”

Are we to believe, then, that at this late date, there is not already such a handbook? Nearly five years have passed since Pope Francis created his own Pontifical Commission for the Protection of Minors. What has that group been doing all this time? Why did we not hear a discussion of the commission's proposals?

In fact the Pontifical Commission was virtually ignored during the “summit meeting.” The group's chairman, Cardinal Sean O'Malley, was not a member of the organizing committee for the event, nor was he one of the featured speakers. The meeting did not begin with an agenda furnished by the Vatican group that has been working on this issue, nor did it end with a commitment to strengthen the commission's authority. Archbishop Mark Coleridge actually suggested the creation of a new Vatican office to handle the sex abuse scandal — overlooking the fact that such an office already exists!

For several years, Cardinal O'Malley's commission has pushed for a formal mechanism that would hold bishops accountable for their handling of sex abuse complaints. (Pope Francis went so far as to create that tribunal but then, under pressure, withdrew his approval and let the initiative die.) At the summit, Archbishop Charles Scicluna told reporters that the current system for holding bishops accountable is superior to a tribunal, because it gives the Pope greater latitude. But that was cold comfort, at a time when Italian newspaper headlines told stories about bishops who had been promoted by Pope Francis, even after they had been accused of tolerating or even committing abuse.

Before the meeting began, I held out a slim hope that some bold bishops — perhaps from our American continent — would stand up against the Vatican public relations machinery and demand serious answers to serious questions. Alas, it was not to be.

Perhaps the Vatican believes that the public outrage about the abuse scandal is an exclusively American phenomenon, which can safely be ignored. If so, they are operating under a dangerous illusion. Yes, it is true that the scandal has produced the greatest — and angriest — reaction here in the United States. But the scandal continues to spread around the globe, and the anger and frustration are bound to escalate.

Consider the stories that broke during just those four days of the summit meeting:

The scandal continues to fester; the pot continues to boil; the frustration and anger of the laity continue to mount. The Vatican “summit” may have postponed the reckoning, but that reckoning is coming.