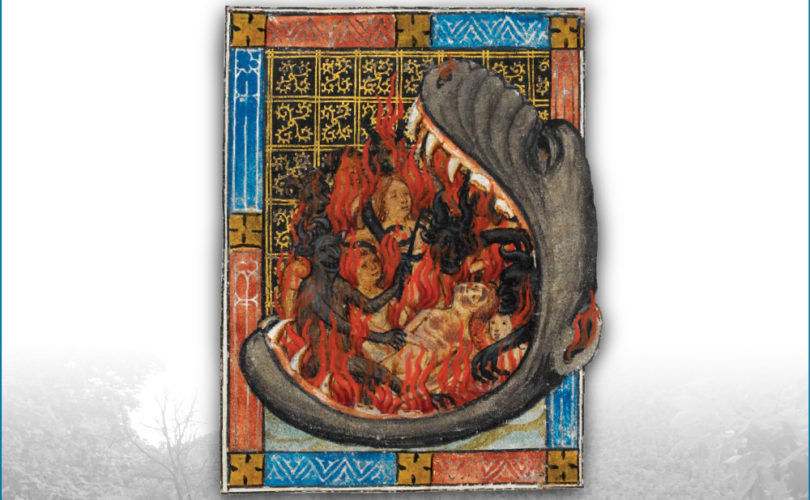 February 21, 2019 (Catholic Family News) — As we endure the opening of the Vatican's summit on “The Protection of Minors in the Church” (Feb. 21-24), it is interesting to note that the four-day meeting happens to coincide with the feast of St. Peter Damian (Feb. 21, post-conciliar calendar; Feb. 23, traditional Roman calendar), author of the Book of Gomorrah and the Church's most zealous champion against clerical sodomy, which was rampant during his lifetime (A.D. 1007–1072) as it is today.

This is quite strange and ironic, considering that Pope Francis and the men he appointed to organize the summit continue to blame “clericalism” or “abuse of power” as the root problem while denying the strong link between homosexuality and the abuse crisis.

During Monday's press conference in Rome, for example, three of the summit's organizing committee members — Cardinal Blase Cupich, Archbishop Charles Scicluna, and Fr. Hans Zollner, S.J. — fielded questions concerning homosexuality among the clergy and whether or not that issue will be addressed during the summit. Setting up her question for Cupich and Scicluna, LifeSiteNews Rome correspondent Diane Montagna stated:

Recently, Cardinal [Gerhard] Müller, former Prefect of the Congregation for the Doctrine of the Faith — which gives him a unique perspective on these problems — said, as others have … that more than 80% of the victims of these sexual offenders are teenagers of the male sex [see here]. Will the problem of homosexuality among the clergy be addressed as part of this problem? It's obvious from the data that many of these acts committed against minors are homosexual acts. In fact, the majority [are]. So will this be part of the Church's 'transparency' over the course of the coming days?

Yes, I believe that it's important to admit the fact and recognize the fact of what you said in terms of the percentage of abuse involving male on male sex abuse. That is important. I think that has to be recognized. At the same time, as professional organizations studied the causes and contexts — such as the John Jay School of Criminal Justice and also the Royal Commission's report in Australia — indicated that homosexuality itself is not a cause. …

So if in fact you, as some say, there is homosexuality in the priesthood, you can see already that it is not as a result of being homosexual that you abuse, as though homosexual people are more prone to abuse children than straight people, but it is a matter of making sure that the opportunity and the protection of children are priorities.

What the cardinal conveniently failed to mention is that the 2004 John Jay College study — “The Nature and Scope of Sexual Abuse of Minors by Catholic Priests and Deacons in the United States 1950-2002” — is the very document which reports, “Overall, 81% of victims were male and 19% female” (pp. 6, 69). Granted, the 2011 John Jay College companion report to which Cupich referred — “The Causes and Context of Sexual Abuse of Minors by Catholic Priests in the United States, 1950-2010” — inexplicably concludes that “priests with a homosexual identity or those who committed same-sex sexual behavior with adults” are not “significantly more likely to sexually abuse children” (p. 119), the fact remains that a clear majority of abuse has been homosexual in nature, as Cardinal Müller and others have emphasized.

“Archbishop Scicluna declined to discuss possible homosexual reasons connected with the abuse of minors and vulnerable adults,” reported Edward Pentin of the National Catholic Register, “but underlined the importance of transparency to ensure cover-up is a 'no-go' that has to be condemned 'without any hesitation.'”

In the Spirit and Power of Peter Damian

Given their refusal to confront the sodomitical elephant in the room, it seems highly unlikely that summit organizers purposely planned the event to coincide with St. Peter Damian's feast day, but I suspect this detail was arranged by Divine Providence to underscore the root problem. Whatever the case, we should all be imploring the prayers of this Doctor of the Church, who worked tirelessly — first as a Benedictine Prior and later as Cardinal-Bishop of Ostia — to expose and eradicate “the befouling cancer of sodomy,” as the saint describes the spiritual disease in his Book of Gomorrah, a lengthy treatise devoted to the subject and addressed to Pope St. Leo IX (r. 1049–1054).

In our own day, another prelate has distinguished himself by his clear and zealous denouncement of “the scourge of homosexuality” among the clergy. I am referring, of course, to Archbishop Carlo Maria Viganò. Although he has not explicitly referenced the Book of Gomorrah in his public testimonies, it seems clear that Our Lord has raised up Archbishop Viganò “in such a time as this” (Esth. 4:14), in the spirit and power of Peter Damian (cf. Luke 1:17), to say what so few in the hierarchy have the courage to proclaim about present circumstances:

This is a crisis due to the scourge of homosexuality, in its agents, in its motives, in its resistance to reform. It is no exaggeration to say that homosexuality has become a plague in the clergy, and it can only be eradicated with spiritual weapons. It is an enormous hypocrisy to condemn the abuse, claim to weep for the victims, and yet refuse to denounce the root cause of so much sexual abuse: homosexuality. It is hypocrisy to refuse to acknowledge that this scourge is due to a serious crisis in the spiritual life of the clergy and to fail to take the steps necessary to remedy it. (third testimony)

And most recently, in an article for the National Catholic Register, the former apostolic nuncio stated in reference to the summit, for which he is “praying intensely”:

Why does the word 'homosexuality' never appear in recent official documents of the Holy See? This is by no means to suggest that most of those with a homosexual inclination are abusers, but the fact remains that the overwhelming majority of abuse has been inflicted on post-pubescent boys by homosexual clerics. It is mere hypocrisy to condemn the abuse and claim to sympathize with the victims without facing up to this fact honestly. A spiritual revitalization of the clergy is necessary, but it will be ultimately ineffectual if it does not address this problem.

May Our Lord soon send His Church more shepherds after His own Heart, who will nourish His flock with sound doctrine and a holy example (cf. Jer. 3:15) and fearlessly drive out the wolves in sheep's clothing (cf. Matt. 7:15). And may His Vicar on earth be the first among them to do so.

St. Peter Damian, pray for us!