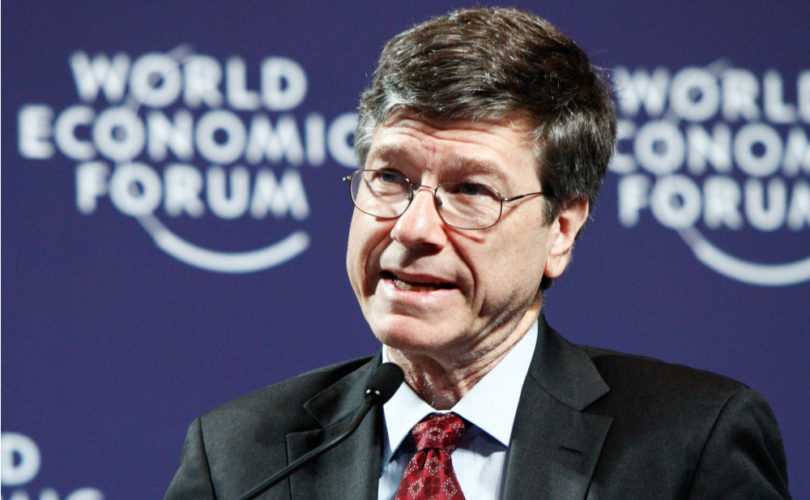 As the advocate of the UN Millennium Development Goals, and the upcoming Sustainable Development Goals, Sachs underscores the need for population control to rid the world of poverty and man-caused climate change, “population dynamics are very important for sustainable development.” And by ‘population dynamics’, Sachs spells out the strategy, “the world, especially the donor countries in their financing and their implementation should guarantee access to sexual and reproductive health services.”

By necessity, Sachs’ playbook includes the demonization of the 1%, Fox News, Koch Brothers, coupled with the scorched earth rhetoric of class warfare. Why? The UN needs to squeeze more money from the ‘donor countries’ of the developed world to fully fund its elaborate world government, and accordingly, must silence its critics with the politics of personal destruction. Shaming works even in the secular world of the United Nations.

Shockingly, the Vatican is fully cognizant and acknowledges that the SDGs include the anti-life radical reproductive rights in the UN agenda.

Shockingly, it appears that Jeffrey Sachs is the most prominent advisor on the Papal environmental encyclical:

Mr. Population Control Sachs has been invited to address several Vatican environmental workshops in anticipation of the Pope’s Environmental Encyclical.

Mr. Population Control Sachs co-authored with others the final Vatican environmental mission statement entitled, “Climate Change and the Common Good.” announcing with typical apocalyptic flare that “as early as 2100 there will be a non-negligible probability of irreversible and catastrophic climate impacts that may last over thousands of years.”

Instead of encouraging the faithful to look to the heavens for salvation, the Vatican now embraces Sachs’ ‘sky is falling’ catastrophic eco predictions. Nothing like scare tactics to mobilize change.

But there is more.  Jeffrey Sachs enjoys many soapboxes.

Watch as the Occupiers regurgitate the radical rantings of Professor Sachs, the UN and Papal Advisor, as he addresses an Occupy Wall Street pep rally!

Sachs fawned over the Occupy Wall Street thugs encouraging the radicals with his leftist platitudes, “Thank you for changing the direction of this country” and proclaiming “You got the right message.”

One wonders about Sachs’ judgment about the “right message” in light of the widespread violence of the Occupiers who destroyed commercial properties through vandalism and arson, and other assorted violent criminal activity.

Indeed, Sachs made several visits to preach and teach the Occupy Wall Street anarchists. He lavishly emboldened the protestors: “You’ve done a magnificent job. This is how history is made. I’m with you to support you. Keep it up. We can brainstorm.”

Listen to Sachs spoon feed his divisive environmental ideology, as he displays his political agenda by blaming the 1% for “wrecking the planet” and angrily demands that “we want this planet back from the Koch brothers.”

Is it any wonder that Argentinian Bishop Sanchez Sorondo, who chairs the Pontifical environmental conferences and invited Jeffrey Sachs three times to address the Vatican, dismisses thoughtful independent climate scientists who dispute man made climate change, as funded by oil interests?

Is it any wonder that the Vatican engages in politics of personal destruction by demonizing respectful scientific dissent with dismissive political putdowns as “Tea Partiers” ?

Is the Vatican taking a page from its expert, Jeffrey Sachs, the academic to the anarchists?

Is the Vatican taking its UN marching orders from its eco-expert, Jeffrey Sachs?

It is time for Catholics to expose the disguised UN agenda of global abortion and reproductive rights embedded in the nuanced language of sustainable development and demand that the Vatican sever this unholy partnership.

When you hear the Vatican officials, like “Vice Pope” Cardinal Rodriguez Maradiaga denigrate capitalism, remember papal advisor and the Professor of Occupy Wall Street, Jeffrey Sachs, who excoriates the 1% as those who are “wrecking the planet.”

When you hear Vatican officials like Bishop Sorondo anticipate that the papal encyclical will blame capitalist profit as the cause for climate change, remember Jeffrey Sachs’ leading similar tirades with the Occupy Wall Street criminals.

When you hear the Vatican scorn the wealth and success of the most world’s generous country, remember the Vatican’s own expert, Jeffrey Sachs, the Occupy Wall Street preacher, who shouts lavish praise on the anarchists, “this is how change happens and it’s very exciting.”

Who is Jeffrey Sachs and why was he at the Vatican?