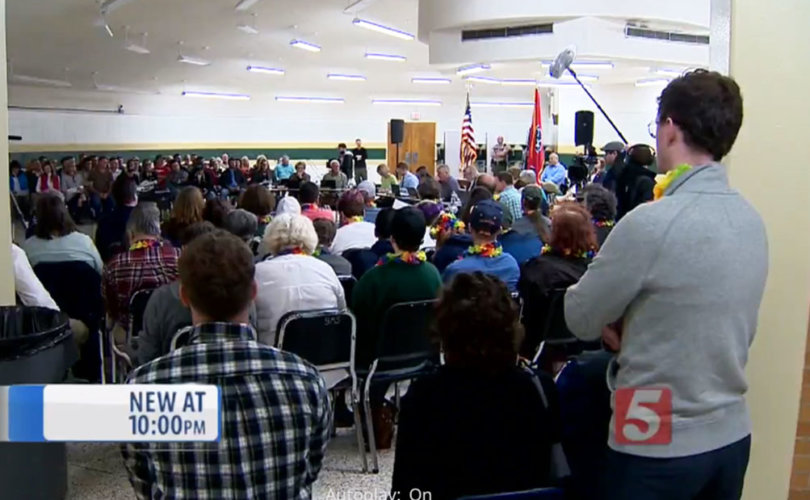 April 14, 2016 (Mass Resistance) – There were threats, anger, and intimidation by state and national homosexual activists. But the Franklin County, Tenn., School Board stood up to it. On Monday, April 11, the Board voted 7-1 to institute regulations that would severely restrict – and eventually cause to terminate – the activities of the “gay” GSA club recently put into the high school.

This is a huge victory for parents in Franklin County Tenn. While nearby North Carolina, Georgia, and Mississippi are getting pummeled by the LGBT tidal wave, this School Board has displayed outstanding courage and clarity of principle. (The one dissenting vote was by the Board member from the left-wing University of the South. That area has only a small number of children in the county’s public schools – and numerous pro-LGBT activists.)

The new regulations will apply equally to all school clubs. But as we have shown, “gay” clubs are quite different than all the others. They are coordinated by national LGBT organizations, depend on secrecy and deception, give access to un-vetted outside activists, and include information, materials, and student activities that parents consider dangerous and offensive. Those “unusual” aspects will be strongly affected by the regulations.

The battle over the “gay” GSA (Gay-Straight Alliance) club at Franklin County High School, going on since January, has been covered extensively on local and even national media. State and national LGBT activists had targeted the school and made the effort a very public cause. But the overwhelming majority of parents in the district didn’t want it. And the School Board listened to them.

Why make “regulations” instead of simply removing the club?

One would think that school officials could simply ban a high school club that promotes dangerous, unhealthy. and perverted sexual behaviors. But the national LGBT movement has been determined to force their “recruitment” clubs into schools, usually using threats of expensive lawsuits.

For years, the LGBT movement has successfully used the Federal Equal Access Actas a legal hammer in the courts against school districts. They threaten schools by telling them that the Act requires that (1) all school clubs (and sometimes even community uses of school facilities) must be closed down if the GSA is closed down, and (2) closing a GSA club at all will cause additional legal trouble. In January, the ACLU sent a letter to each school principal in Franklin County, telling them that they had no legal recourse but to allow GSA clubs.

To counter this, MassResistance contacted the national pro-family legal group Liberty Counsel, which worked with the School Board.

First, Liberty Counsel told the Board that these legal threats are exaggerated. The former is only partially true – only non-curricular clubs are affected by a school rejecting the GSA; curricular clubs (such as a math club) and community uses of facilities are not affected. As for additional legal trouble, this can be mitigated by a pro-family legal group that knows these issues, such as Liberty Counsel, rather than the Board’s regular legal counsel.

But taking this approach would still likely result in other school clubs being closed and a distracting legal battle over simply closing a GSA club.

So Liberty Counsel provided a better strategy – a strong new club policy. In recent years other school districts around the country have crafted strict regulations for allschool clubs – which disallow the secrecy, duplicity, and abhorrent practices that are specific to the “gay” clubs. These kinds of common-sense regulations that apply to all clubs have been upheld by the Federal Courts.

For example: Requiring opt-in parental consent to join any club; teacher oversight; strict limitations on outside speakers, participants, and attendees; and documenting all activity in the club. These are an anathema to the way “gay” clubs intertwine kids with hardcore LGBT activists, push sexual themes, and promote outside events.

Read the entire list of rules passed by the Board HERE.

When forced to be completely accountable, open, and transparent with what they’re doing with kids, and not having free access for their adult activists, these “gay” clubs don’t last long.

The regulations go into effect immediately. And should the LGBT movement’s attempt any legal intimidation tactics, Liberty Counsel is ready to step in and defend the school district. So their usual threats won’t work well this time.

The First Amendment simply does not protect lewd, obscene, or pornographic materials in the school context; one gay club, for instance, was denied the ability to meet when it sought to distribute flyers with sexually-explicit internet website links.

Schools should be vigilant in their oversight of such clubs, which are often mere conduits for adult homosexual groups seeking to spread their message directly to impressionable teenagers.

How MassResistance helped in Franklin County

Over the last few days, many local parents and even a school board member called MassResistance to thank us for our help over the last several weeks.

The LGBT movement is well-versed in intimidation, harassment, twisting of facts, and sowing fear and confusion. In situations like this the biggest problem that both parents and elected officials run into is not knowing what’s coming at them or how to deal with it. They want to do the right thing, but the well-crafted blitzkrieg can be can be very frightening and disorienting.

We’ve seen this for years. So we were able to explain to the parents and elected officials in Franklin County exactly what was happening, where it was coming from, and what they could do about it. We showed them how it’s a lot of smoke and mirrors. When you know the truth, the LGBT movement’s lies, fear-mongering, and attempts at confusion are easily unraveled.

The LGBT activists are vicious, angry bullies when they think they have the upper hand, but when you turn on them they become cowards. Another way to put it: It’s like dealing with 7-year-olds. (Think of their childish name-calling.) When you understand that, it gets a lot easier.

Can this reverberate across the country?

We believe that this decisive action could likely reverberate across America. This is a great victory and this model needs to be followed elsewhere! The courage and boldness of this group of elected officials could be contagious, as the news gets around and the tools for winning are made available.

Coming in our next post: In the days leading up to (and even during) the School Board meeting, School Board members and parents in Franklin County endured a wave of threats, anger, harassment, and intimidation by the homosexual activists. But they didn’t back down a bit! We’ll show you just what they put up with.

March 12: See for yourself: Vicious, brownshirt tactics by LGBT activists against local Christians who criticize the “gay club” in their high school.

March 12: Tennessee county battling LGBT onslaught over “gay” club in high school. Showdown at school board meeting coming up.
What are GSAs?