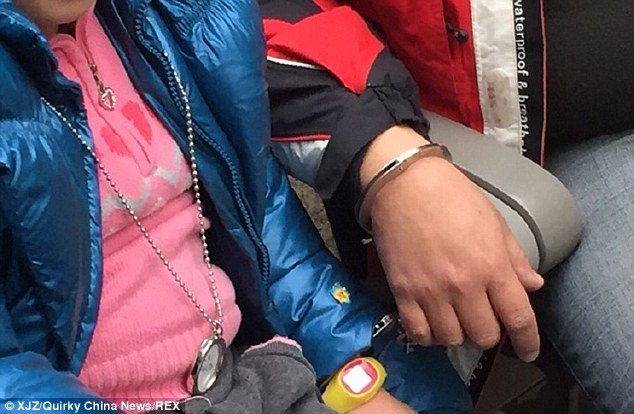 February 19, 2015 (Bound4Life.com) — On the eve of Chinese New Year, photos of a father and daughter traveling to see her grandparents have gone viral – picked up by dozens of blogs and media outlets worldwide.

Seen waiting together in Beijing Capital International Airport, Chen Yen has handcuffed himself to his little girl to ensure she is not kidnapped for use as a future bride.

“I saw a warning by police on the TV to take care as traffickers and pickpockets would be out stealing in the holiday rush,” said Mr. Chen according to reporting by The Daily Mail. “I don’t care about pickpockets, but I do care very much about losing my daughter.”

Such a stark image begs the question: how did China reach this point? The story stretches back over three decades, to a government policy that has resulted in the prevalence of sex-selective abortions.

Strict government control over family size has caused a serious gender imbalance due to a preference for sons, with today 33 million more Chinese men than women. “As more men remain unmarried, it raises the risks of anti-social and violent behavior,” notes one recent report.

Major media outlets such as the New York Times and BBC News have recently touted a supposed shift in China’s totalitarian policies – from allowing Chinese parents to have a single child, to now proposing incentives for a newly revised Two Child Policy.

Yet the true picture is not as reassuring as the “official” story would indicate. Thirty-five years of national population control have had an undeniably troubling impact on Chinese society.

According to China’s former Minister of Health Gao Qiang, China has 400 million fewer people today as a result of these policies. In other words, China has lost more people than the current 321.4 million population of the United States.

The Chinese Communist Party has a long history of falsely representing its family-planning regulations. Originally implemented in 1979, the One Child Policy utilizes forced abortions, forced sterilization and forced contraception to manage population growth.

A 2013 Chinese law sought to revise this policy, stating that families in which one parent was a single child would be allowed to bear two children. However, revising regulations has not reversed the human rights violations that persist.

“Even if all couples were allowed two children, there is no guarantee that the Chinese Communist Party will cease their appalling methods of enforcement,” says human rights activist and former lawyer Reggie Littlejohn.

Describing the violent methods that have continued for decades, Littlejohn continues, “Women who get pregnant without permission will still be dragged out of their homes, strapped down to tables, and forced to abort babies that they want, even up to the ninth month of pregnancy.”

According to the latest report of the Congressional-Executive Commission on China, family planning regulations in 22 out of China’s 31 provinces explicitly instruct officials to implement coercive measures such as forced abortions as their supposed remedy to solve the issue of “out-of-plan” pregnancies.

“Pro-choice and pro-life advocates can agree: No one should support forced abortion, because it is not a choice,” concludes Littlejohn, who advocates for justice through Women’s Rights Without Frontiers.

“Standing for the value of every human life is a cause that can change the culture of China,” says Matt Lockett, Executive Director of Bound4LIFE International, which is involved in many nations globally. “A prayer movement has already begun that is contending for life with the same determination as this father protecting his daughter at the airport.”

A recent interview with Reggie Littlejohn reveals the harrowing realities faced by China’s mothers and fathers:

Marisa Lengor Kwaning is a writer, editor and health policy analyst who resides in Washington, D.C. She has worked in public health, disaster management, as well as foreign and domestic health policy. She earned a Masters degree in Public Policy from George Mason University and currently consults at Final Draft:Writing Services