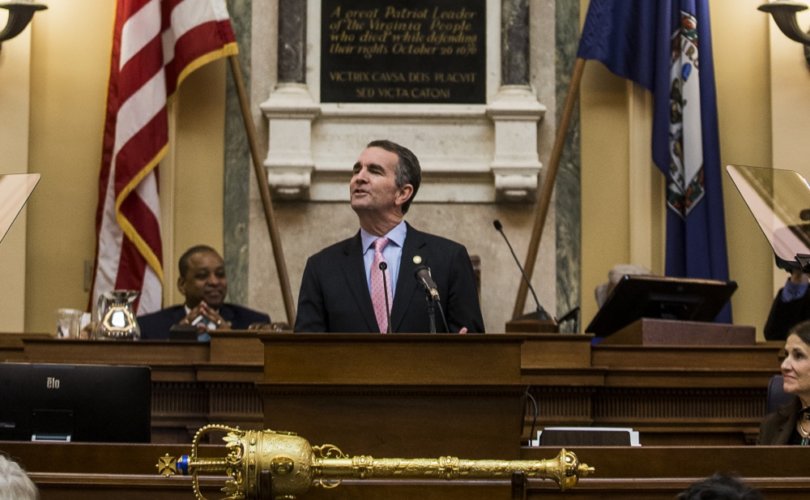 RICHMOND, Virginia, March 25, 2020 (CNS News) — Virginia Gov. Ralph Northam issued an executive order on Monday that is aimed at stopping the new coronavirus — and, in the process, makes it a criminal offense to hold a church service attended by more than 10 people.

Yes, his order makes it a crime for more than 10 people to gather in a church.

There are two passages in the text of the governor's order that are relevant to this.

This is a screen capture of paragraph 1 in Gov. Ralph Northam's executive order prohibiting “all public and private in person gatherings of 10 or more individuals.”

This is a screen capture of the paragraph in Gov. Ralph Northam's executive order that states it is a Class 1 misdemeanor to violate paragraph 1 of the order.

Indeed, the actual text of § 44-146.17 says: “Executive orders, to include those declaring a state of emergency and directing evacuation, shall have the force and effect of law and the violation thereof shall be punishable as a Class 1 misdemeanor in every case where the executive order declares that its violation shall have such force and effect.”

What can the government do to you for committing one of these Class 1 misdemeanors?

The Code of Virginia spells out the punishment in § 18.2-11. It says: “The authorized punishments for conviction of a misdemeanor are: (a) For Class 1 misdemeanors, confinement in jail for not more than twelve months and a fine of not more than $2,500, either or both.”

Now, attending a typical church service — like, say, a Catholic Mass on Sunday — would seem to fall within the scope of “public and private in person gatherings of 10 or more individuals.”

But a “Frequently Asked Questions” sheet that his office published about the executive order does address the issue.

The fifth question it answers is: “What about religious services? Can I still go to my church, synagogue, or mosque?”

The answer: “Virginians are strongly encouraged to seek alternative means of attending religious services, such as virtually or via 'drive-through' worship. Places of worship that do conduct in-person services must limit gatherings to 10 people, to comply with the statewide 10-person ban.”

This is a screen capture of the question-and-answer in the “Frequently Asked Questions” sheet published by Gov. Ralph Northam's office that says places of worship “must limit gatherings to 10 people, to comply with the statewide 10-person ban.”

To make certain that this meant that the law making it a misdemeanor criminal offense to have gatherings of more than 10 people applied to churches, I addressed a question to Northam's press secretary, Alena Yarmosky.

I asked her via email: “How about a simple yes or no: Are church attendees and churches exempted from the misdemeanor penalty that applies to other individuals and organizations that violate the governor's Executive Order and have gatherings that bring together more than 10 people?”

She responded by email: “The Governor's EO 53 bans assemblies of more than 10 people, statewide. That includes gatherings at private schools, private clubs, parties, as well as any other social get-together, and religious services.”

Virginians now live in a state where holding a church service attended by 11 people has been unilaterally declared a crime by the governor.

The same executive order that creates this church-attending crime also declares that Virginia's state-owned liquor stores are “essential retail businesses” that “may remain open during their normal business hours.”

How can a person walk into a liquor store, exchange a glass bottle of whiskey and money with a clerk and keep his social distance? Could 11 people in a church — praying the rosary together — stay further apart physically than the buyers and sellers at a Virginia Alcoholic Beverage Control store?

The Catholic dioceses of Arlington and Richmond had already voluntarily determined to close their Masses to the public to limit the spread of the coronavirus — before the government ordered them to limit their gatherings to 10 people. They gave witness to the virtue of prudence. But prudence also counsels against the sort of edict Northam redundantly issued this week ordering churches to close under penalty of law.

What would St. Thomas More think of a government that made it a crime to gather and pray in church?

What would the framers of the First Amendment think?

What future “emergencies” will inspire future governors to act on Northam's precedent?

(Terence P. Jeffrey is the editor in chief of CNSNews.com.)

Published with permission from CNS News.