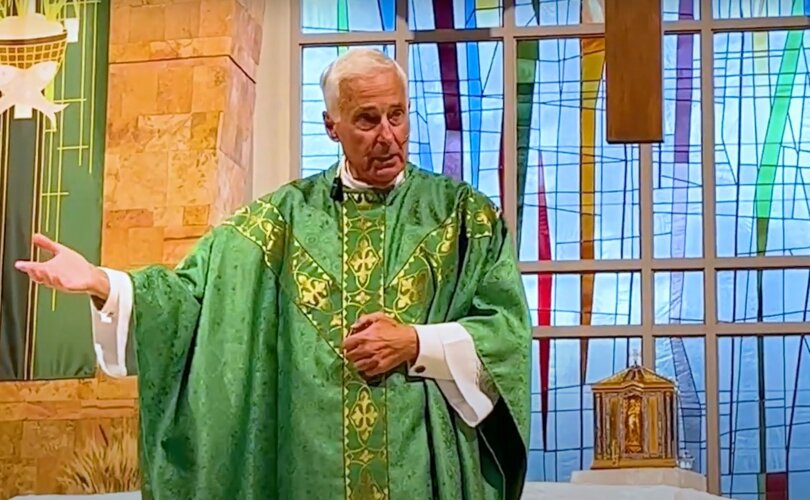 (Fr. Michael P. Orsi) — I often hear complaints about “that priest down in Florida who gets involved in politics.”

Let me plead guilty to being that priest.

Clergy are often reluctant to take a public stand on political issues. They don’t want to risk alienating members of their congregations, or they fear challenges to their churches’ tax exempt status.

My view is that religious leaders must get involved in politics. Indeed, they have an obligation to address important public questions. Elections determine who will hold temporal power in the nation — and, therefore, who gets to determine the civic atmosphere in which people attempt to live their faith.

Living by faith can be difficult under the best of circumstances. Right now, when so many stumbling blocks have been put in the way, conducting a moral, faith-filled life is a special challenge.

Politics matter because souls are at stake.

With the election just days away, permit me to note a few areas of concern that make voting important:

Young people come under the influence of teachers, programs, and instructional materials that, to put it mildly, are not committed to promoting the Christian ideal of human sexuality. On the contrary, schools today celebrate perversion, and young people are actually groomed to take part in sexual practices that are not conducive to a healthy life and human flourishing.

The influence of school board members can effect lives over generations.

We have an obligation to safeguard our children against influences that can endanger their physical wellbeing and their  immortal souls. We can do that most immediately by being careful whom we elect to our school boards.

Take time to know who’s running and what their stands are on critical issues.

For most of us, rising prices at the supermarket or the gas pump are a signal to moderate our purchasing behavior. But for some families, the choices prompted by these startling increases are a matter of survival.

There are people for whom buying the gas they need to get to work requires cutting back on food, or planning to live with minimum heat this winter. Inflation isn’t an abstract economic concept; it’s a moral issue that affects human life.

Government leaders who have adopted policies that are driving up the cost of living must be held accountable for those policies and the ideological vision that prompts their actions. Consider seriously what economic principles and legislative proposals various candidates are putting forth.

— Article continues below Petition —
Stand with pro-life priest Fr. Fidelis as he faces jail for defending unborn babies
Show Petition Text
13376 have signed the petition.
Let's get to 15000!
Thank you for signing this petition!
Add your signature:
Show Petition Text

READ: Tucker Carlson: US elites ‘hate middle America’ and have ‘failed’ them

Our major cities, and even some less populated communities, are out of control. People are being attacked in the streets, at bus stops, and on subway platforms, and even in their homes. Little children are being shot.

How can we maintain a civilized society when people are afraid to walk around their towns, to conduct business, to enjoy simple pleasures?

Much of this is drug-fueled. But it’s also encouraged by dubious law-enforcement theories, such as imposing undue restrictions on the police, eliminating cash bail, and turning a blind eye toward criminality within favored ethnic and political groups.

Even though immigration policy is a source of disagreement — who should get in, under what terms, and in what numbers we should accept new residents — there’s no denying that the situation on our southern border is something close to total chaos.

Not only do we have a flood of illegal immigrants, we are being inundated with fentanyl and other dangerous drugs. This year alone, more than 80,000 young people have been lost to fentanyl, either taken directly or mixed with marijuana and other so-called “recreational” substances.

In some cities, word was out before Halloween that parents should be on guard for Skittle-like candies laced with fentanyl. That wasn’t at all an inappropriate fear. Drugs are a cash cow for international cartels. Criminals are intent on hooking more customers. And our open border is the primary route by which these evil products enter our country.

We are once more being drawn into war. And as with several previous conflicts (especially Vietnam) we are being asked to make a huge commitment, with very unclear goals, confused strategy, and no definite end point.

We are spending billions of dollars, and putting American lives at possible risk, even raising the specter of nuclear war — all in a part of the world where we have no vital interests.

To make the situation even more confusing, we don’t know what’s actually happening on the ground. News reports and government statements are contradictory, and propaganda is rampant.

Are the Ukrainians defending their land effectively, or are they collapsing under superior Russian military might? Are the Russians gaining ground, or is their army dissolving as men flee the country to avoid conscription? We simply don’t know.

These important topics are only some of the issues to be determined by the upcoming election. There are grave moral questions in play. Please consider them seriously.

The decisions we make now touch the future. They will determine what path we follow as a nation, and what we will be as Americans.

Take it from that political priest down in Florida.

This essay is based on a homily delivered by Fr. Orsi and is published with permission.  A priest of the Diocese of Camden, New Jersey, Rev. Michael P. Orsi currently serves as parochial vicar at St. Agnes Parish in Naples, Florida. He is host of “Action for Life TV,” a weekly cable television series devoted to pro-life issues, and his writings appear in numerous publications and online journals. His TV show episodes can be viewed online here.