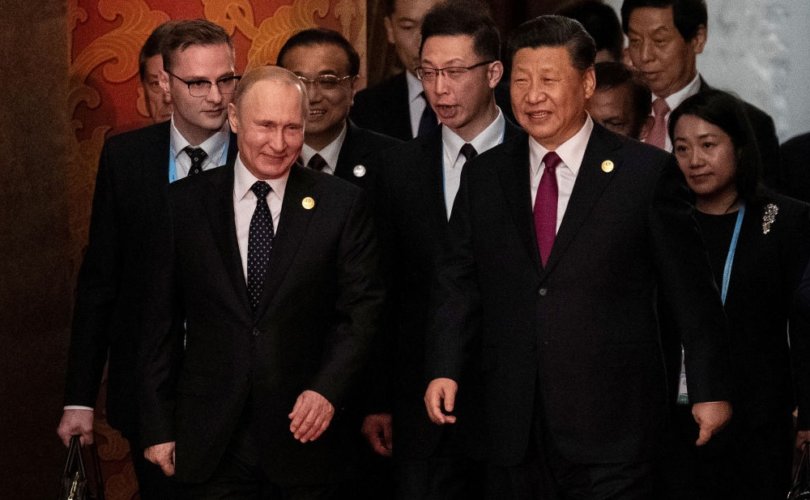 (LifeSiteNews) — The war in Ukraine is nine months old. It broke out in a world dominated by a self-assured West, led by a bruised but confident USA. That world no longer exists.

What has emerged is a sea change in global political power, alongside a slow-motion economic disaster which is still rippling through the West like an earthquake. Where once there was certainty, now there is doubt. Former allies and satellites such as Saudi Arabia and Argentina are realigning with the Chinese/Russian bloc known as BRICS, which is expanding beyond its founder members of Brazil, Russia, India, China and South Africa to absorb up to a dozen more states in the near future.

At present, BRICS controls much of the world’s mineral resources and manufacturing base. Should this expansion take place as expected, then the Chinese-led bloc will control almost two thirds of global gas reserves, with a combined GDP of 30% more than that of the USA.

It has been said that the cautious approach of Putin to the campaign, heavily criticised in Russia, has been steered to avoid upsetting his BRICS allies, present and future. There is no question that Russia’s future lies within such an alliance, having been sanctioned from trading its oil, gas, copper, and grain with the West.

Outside the West, no country has sanctioned Russia economically. There are no plans to do so. If it has been Putin’s plan to not frighten away any of his future business partners, it appears to have worked.

This is more than can be said for the sanctions themselves, which have proven disastrous for Europe and Britain alike. The early forecasts from analysts such as JP Morgan restricted themselves to predictions of historically high fuel prices. To refuse Russian supplies is a high stakes move, since the EU gets over 41 percent of its natural gas and a quarter of its crude oil from Russia. Some EU states, such as Slovakia and Hungary, rely on Russia to meet up to 90 percent of their energy needs.

Understandably, JP Morgan did not go on to complete their miserable equation. They left it to the reader to work out that if the price of fuel goes up, then so does everything else.

A report from City of London analysts Walbrook economics this week explains in simple terms the impact of sanctions on business:

.. [A] colleague who owns a community pub in Leicester has just seen energy bills increase from £18k to £74k pa.  For his pub, read the entire High Street and leisure sector. Frankly, without major price hikes, or margins squeeze much of the High Street will close.  (Walbrook Economics November Newsletter ‘Magical Thinking from the OBR’)

The impact of the removal of most of its domestic natural gas supply is shuttering German industry. Natural gas prices have risen over 141% even as supplies fell, as they attempt to make up for the loss of Russian gas with expensive LNG imported from the USA. To defray this price hike, they have announced a 200-billion-euro aid package to subsidise energy bills. Germany has pledged to halt the import of Russian oil on December 31,,2022, in a move which can only exacerbate its already grave energy crisis.

READ: 5 prime ministers in 6 years: Why are UK politics so unstable now?

In short, the German government has decided to pay much more money for much less gas. It will then pay twice for this gas, as it must print money to give to its citizens so they can pay for it. A similar scheme is due to end in April 2023 in Britain.

These two former powerhouses of Europe are reduced to the communist measure of paying their own people’s bills for them. If they do not subsidise people’s heating throughout the winter, the social costs of government policy may make them ungovernable. How will Germany pay for this—and subsidize the rest of the EU—when it is faced with rapid deindustrialisation? It cannot afford to keep its own factories open. It has replaced some of the energy deficit by switching from gas- to coal-fired electricity generation. That coal was stockpiled and largely bought from Russia.

Europe is surviving the results of its actions for the time being by relying heavily on increased public spending. It is difficult to see how this can be sustained when industrial output in Europe’s manufacturing heartland of Germany is set to plummet and never return. It faces oil shortages, in a crisis long predicted by the head of OPEC, the oil producer’s cartel. Major analysts agreed it would be ‘lights out in Europe’ should the oil and gas cease to flow from Russia.

The nations of western Europe are facing a severe and sustained economic crisis which threatens the stability of their societies. Ewen Stewart of Walbrook Economics writes:

It gives us no pleasure to write this, but we see the UK to be in a state of crisis. The nation is divided philosophically, culturally, constitutionally and economically. The UK cannot be described as stable. It is no consolation that the same can be said for much of Europe, albeit for slightly differing reasons.

The Europe of cheap consumer goods, low interest rates, fully stocked supermarkets, and low-cost air travel is vanishing. In its place, governments are paying their people’s energy bills. Europe’s external allies are being tempted into the arms of a growing rival power, with the strategically important country of Turkey signing a major gas transportation scheme to expand its Black Sea Turkstream pipeline.

Turkey, a NATO member, sits like a bridge between Europe and Russia. It has not made a final decision, preferring to play both sides for now. Yet as an indication of which way the wind is blowing Turkey’s increasing orientation to the East is a strong sign of how far we are from the world of last winter.