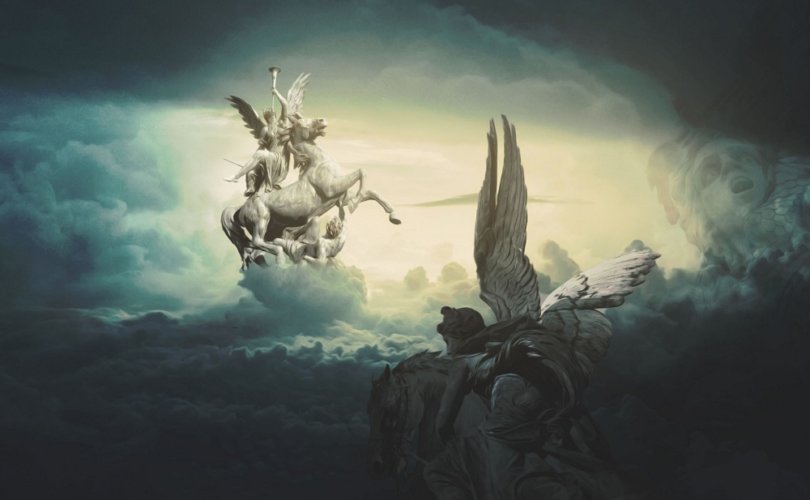 February 10, 2020 (LifeSiteNews) — Our Lord told us that no man knows the day or the hour when He will return (Matt. 24:36–44). But that does not mean we would be without signs that we could not afford to ignore (2 Timothy 3:1–5). For those who are aware of current events in society and the Church, there is an abundance of such signs. For example, in the just referenced scriptural passage, our Lord also said that when He comes, it will be like at the time of Noah. As others have observed, that was the only time in the history of the world, other than our own time, when same-sex “marriage” was legal.

Moreover, like many Christians who watched the Super Bowl recently, we had to turn off the halftime show, which was a hyper-sexual display resembling a frenzied pagan ritual. It even went so far as to have a blasphemous mockery of the crucifixion of our Lord. Yet that did not stop the cultural elites responsible for such content from also spotlighting a lesbian coach of the San Francisco team, or from Blue Shield showing two men kissing in one of the Super Bowl commercials. Even the casual observer would have to acknowledge that those running the major networks and the NFL have abandoned Judeo-Christian values and are quickly going the way of Canada and Europe in their hostility toward traditional religious beliefs.

This does not come as a surprise to this author, who warned twelve years ago that the culture would be lost if the United States legalized same-sex “marriage.” Indeed, as this author further explained, the U.S. has been on the road to secularization for the last half a century. What I did not anticipate, however, would be that even the current pope would part company with his predecessors in caving to the gay lobby. What becomes legalized eventually becomes normalized, and then enforced, which is now happening with unprecedented speed.

For example, this author is representing a Christian female baker who is being sued by the State of California for refusing to make a wedding cake for a same-sex couple. The state is continuing to persecute this good Christian even though the court already ruled in her case that the making of a wedding cake is a form of expressive speech protected by the First Amendment. The cultural elites who have ushered in this new morality will not tolerate any dissenters. But again, this should come as no huge surprise to the well informed Catholic. Indeed, our Blessed Mother related to a Fatima visionary over 100 years ago that the final battle would be over marriage and the family.

Well before that, Our Lady warned in the sixteenth century that the cataclysmic cultural events we are currently witnessing would come to pass in our lifetimes. Our Lady further predicted the apostasy and conflicts within the Church that we have seen with such events as the scandal associated with the P​achamama pagan idols in the Vatican and most recently with the intended ordination of married men in the Amazon.

One can easily envision that the leftist leaders in the Church will keep pushing next for female deacons and priests, and then openly gay priests and bishops. We have already seen that progression of destructive events among the liberal Anglicans, which has caused their organization much turmoil and division. Since the Catholic Church has always served her followers as the repository for the fullness of the Truth, where will we turn if certain leaders in the Church fail to fulfill her mission on earth?  As always, the answers can still be found in Holy Scripture and the timeless magisterial teachings clearly set forth in the Catechism of the Catholic Church.

Our Lord asked the question: when He returns, will He find faith on Earth (Lk. 18:8)? The answer to this question is that there will be a faithful remnant (Rom. 11:1–5). And we can take continued comfort in the fact that our Lord promised that the gates of Hell would not prevail against the Church (Matt. 16:18). Still, we must heed the signs of the times, even though no man knows the day or the hour of our Lord’s return. The inevitable collapse of society, and the current crisis in the Church, should cause us to ready ourselves for His return like never before.

Our merciful and just God simply cannot be expected to continue to tolerate indefinitely the wholesale corruption of the Christian civilization that the Church built, including her most vulnerable and innocent children. Therefore, we must heed the warning: “Above all, you must understand that in the last days scoffers will come, scoffing, and following their own evil desires” (2 Peter 3:3). As witnessed during the Super Bowl halftime show, and in countless other ways, those brazen scoffers are already here in full force.

Charles LiMandri  is the Chief Counsel of the Freedom of Conscience Defense Fund (FCDF), which specializes in religious liberty cases. He is double-board certified in pre-trial practice and trial advocacy by the National Board of Trial Advocacy, and he is admitted to practice law in California; in New York; in Washington, D.C.; and before the United States Supreme Court. The FCDF website is www.FCDFlegal.org.