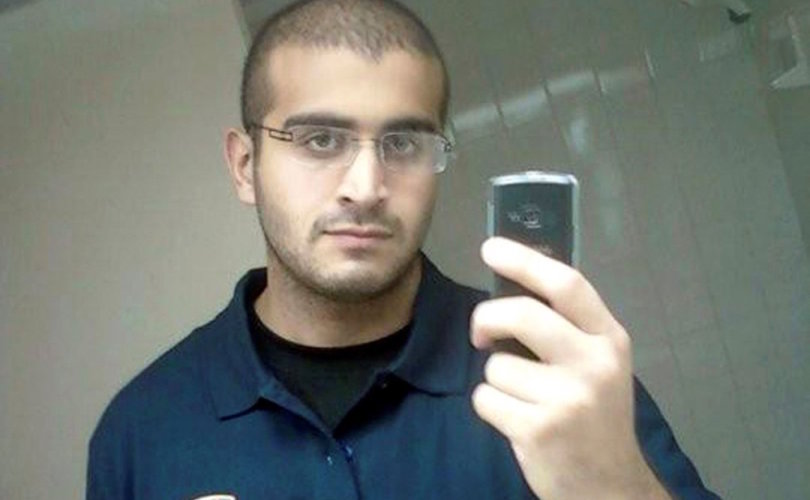 June 24, 2016 (LifeSiteNews) – Now that Orlando mass killer Omar Mateen’s alleged homosexual lover has come forward to claim Mateen was taking vengeance against Hispanic gays after being badly treated in carnal relations, we can have a new place to categorize the shocking event: gay-on-gay violence.

Unless, that is, President Barack Obama’s FBI can erase all copies of “Miguel’s” testimony from Youtube and from our collective memories, like it scrubbed out all the Islamic references from Mateen’s 911 call he made from the nightclub.

Even before Miguel showed up, we had a wealth of culprits: there was the gun lobby, the lax gun laws and the abundance of “assault-like” rifles they permitted in America; there were conservative, Christians whose allegedly “homophobic” beliefs encouraged the mass killing, and, of course, there was the category the president tried to suppress: that Mateen’s was another act of Islamic jihadism.

Of course, we’ve only got Mateen’s word for that. Though many, call them “Republicans,” may be excused for thinking that Obama’s effort to suppress Mateen’s word substantially increases its credibility.

Now we have gay-on-gay violence as an explanation. Gays are supposed to be the victims here, of course, and in that vein we were treated in cities and towns across America, the world and here in my home town in Canada to candlelight memorials where homosexuals and their supporters played the victim card to the nth degree.

We are all sorry for their loss but we are not all feeling guilty for something a Muslim jihadist with unresolved homosexual appetites did in a jilted lover’s rage. Mass killings by would-be jihadists abound. Here in Victoria two marginalized young people planned to blow up a bomb in the midst of the Canada Day celebration in front of the provincial legislature amidst tens of thousands of innocent Canadians of every ethnicity, faith and colour. They were Muslim jihadists too.

Meanwhile we look in vain for examples of Christians blowing up Muslim buses, or bombing gay clubs. LifeSiteNews recently ran a piece on how homosexuals were being killed by their fellow gays inadvertently by infecting them with fatal diseases through unprotected sex.

But there is intentional injury too, as revealed in the National Violence Against Women survey, and reported in The Advocate in 2014: “21.5 percent of men and 35.4 percent of women living with a same-sex partner experienced intimate-partner physical violence in their lifetimes, compared with 7.1 percent and 20.4 percent for men and women, respectively, with a history of only opposite-sex cohabitation. Transgender respondents had an incidence of 34.6 percent [of intimate partner violence] over a lifetime according to a Massachusetts survey.”

A different study, this one by the U.S. Centers for Disease Control’s National Intimate Partner and Sexual Violence Survey (NISVS): 2010 Findings on Victimization by Sexual Orientation, found, “Forty-four percent of lesbian women, 61% of bisexual women, and 35% of heterosexual women experienced rape, physical violence, and/or stalking by an intimate partner in their lifetime.”

And how about this from the same study: “Twenty-six percent of gay men, 37% of bisexual men, and 29% of heterosexual men experienced rape, physical violence, and/or stalking by an intimate partner at some point in their lifetime.”

You can well imagine that there are plenty of people willing to blame this all on heterosexuals. Gays are violent, say some scholars, because they are internalizing the loathing of the dominant “heteronormative” culture, then turning this outward on those nearest and dearest—their same sex paramours. Similarly the high rates of violence shown by women towards children is blamed by doctrinaire feminists on male oppression while modern day jihadists blame their actions on Christian crusaders of the 11th century and Marxists blame all violence on the alienation of the worker from the products of his labour.

But as Christians we have to believe that violence (by which I mean, the wrongful use of force) is part of our human nature since the Fall. And lamentably, so is madness. But we are also bound to believe that fundamentally disordered lives will manifest this, in disease, in depression, suicide rates and violence.

The Christian is called to overcome the Fall as best we can, first by admitting our own responsibility for creating it and then by trying to follow God’s design for our lives. Using the Orlando massacre as an opportunity to target a group for partisan advantage takes us dangerously close to casting the first stone.