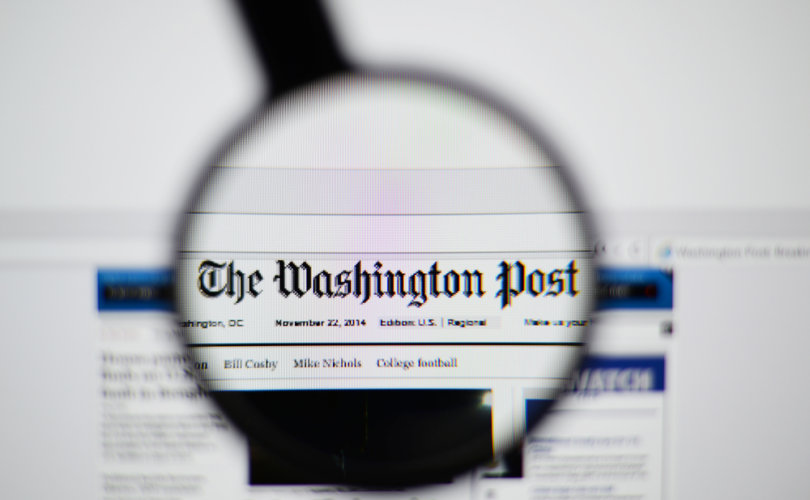 January 9, 2017 (NewsBusters) — A Thursday Washington Post editorial on the results of a House panel's investigation into what the paper called Planned Parenthood's “contributions” to “fetal tissue research” packs an astounding number of falsehoods into a mere five paragraphs.

What the editorial defends is Planned Parenthood's ghoulish practice of harvesting and selling baby body parts. The Post insists that the House panel wants to “punish” the organization by withdrawing its federal funding “without any evidence.” Though an editorial isn't a news report, that doesn't exempt its writers from telling the truth — and this editorial certainly failed in that regard, even contradicting the findings of a previous fact check by one of the paper's reporters.

In light of what the House panel's report really says, the first paragraph of the editorial is such obvious rubbish that readers who wish to spare themselves from reading the rest of it can be forgiven:

Republicans look to punish Planned Parenthood — without any evidence

FIFTEEN MONTHS and nearly $1.6 million later, a Republican-run House panel investigating Planned Parenthood and fetal tissue research ended up where it started: with no evidence of wrongdoing. That has not deterred the Republicans from proposing a political agenda so extreme it should scare not only those who care about women’s health care but also anyone who values science and its contributions.

As to the claim that there was “no evidence of wrongdoing,” the Daily Signal's Kelsey Harkness read the same report and found otherwise.

Planned Parenthood affiliates profited by transferring parts of aborted babies to outside organizations in violation of the law.

In the House panel's words:

Copious detail supports the House panel's core contention in its report. The idea that none of it constitutes “evidence” is so absurd that one must conclude that the editorial's writers simply must have known that they were lying when they wrote it, and didn't care, or chose not to read the report, and simply made things up.

Here are just a few items of genuine evidence (bolded), representing quotes from the House report included in either in Harkness's analysis or noted in CMP's related reaction post:

Perhaps the Post is holding out hope that none of the above constitutes evidence admissible in a courtroom. But the editorial doesn't say that, and such a claim would be hard to square with the fact, per the panel's Executive Summary Page xxv, that it “has made numerous criminal and regulatory referrals and investigations are underway around the nation.”

What does the Post editorial identify as the “political agenda so extreme”? Defunding Planned Parenthood in the course of hopefully repealing Obamacare.

The fact of the matter is that if it had to, Planned Parenthood could raise all the money it would ever need from pro-abortion organizations to run its abortion business without a dime of federal money. But it's the liberal establishment's most sacred of sacred cows, and that move can therefore never be contemplated.

The rest of the editorial piles on more falsehoods which have become articles of faith on the left, and complete fabrications for anyone in touch with reality. Here are two of them.

1. “The (Center for Medical Process) videos since have been completely discredited.”

Nope. As analyzed by Alexandra DeSanctis at National Review in July of last year:

(regarding the tired “deceptively edited” claims) — Both of the studies commissioned to determine whether or not the videos were doctored found that no pertinent or relevant edits had been made to the footage.

DeSanctis also called out as lies the claims that there is no proof that PP profited from its baby parts business (there's plenty), or that babies are never born alive and killed for their organs (oh yes they are).

The following from FaithZette demonstrate how dishonest that claim is:

… Perhaps even more stunning, Planned Parenthood performs 160 abortions for every one time it receives an adoption referral.

PP's 3 percent claim is so weak that in 2015, Glenn Kessler, the Post's own fact-checker, gave it “Three Pinocchios”, i.e., “This gets into the realm of 'mostly false.'”

Those who wish to know more about the dishonesty of this claim should visit a related video produced by Lila Rose's Live Action group.

The Washington Post editorial just analyzed should disqualify its Editorial Board from being taken seriously on any matter for the foreseeable future.