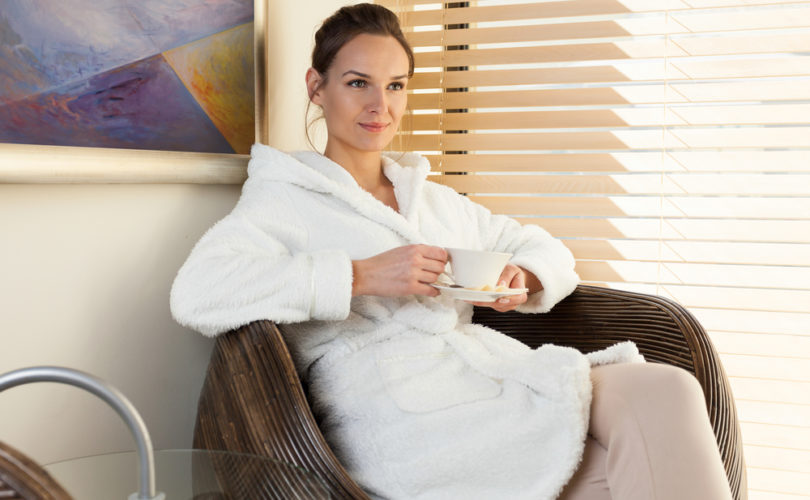 March 31, 2015 (NewsBusters.org) — On Monday, the Washington Post's Sandhya Somashekhar zeroed in on the “unabashed approach” of Carafem, Washington, DC's latest abortion center, which, in her words, “reflects a new push to destigmatize the nation's most controversial medical procedure by talking about it openly and unapologetically.” Somashekhar, the liberal newspaper's “social change” reporter, spotlighted how the upstart “aims to feel more like a spa than a medical clinic.”

The journalist led her item, “New spa-like abortion clinic is part of a trend to 'destigmatize' the procedure,” with the spa comparison and noted its “natural wood floors and plush upholstery.” She then pointed out Carafem's “slick ads” set to go up in Metro stations across the Washington region leave nothing to doubt: 'Abortion. Yeah, we do that.'

Somashekhar continued by outlining the aims of the new abortion business. She also focused on the wider political context of its opening:

The clinic, opening this week in tony Friendship Heights, specializes in the abortion pill and will be unique for its advertising. Its unabashed approach also reflects a new push to destigmatize the nation's most controversial medical procedure by talking about it openly and unapologetically.

Plagued by political setbacks in recent years, abortion-rights activists are now seeking to normalize abortion, to put a human face — and in some cases, even a positive spin — on the procedure.

In Los Angeles County, groups recently sent women door-to-door in conservative neighborhoods to talk about their abortion experiences in the hopes of changing minds. A series of Democratic lawmakers have publicly acknowledged having undergone the procedure. And new online projects solicit personal testimonials, including from women who have no regrets about terminating their pregnancies.

“We don't want to talk in hushed tones,” said Carafem president Christopher Purdy. “We use the A-word.”

The “social change” reporter then spent 17 paragraphs highlighting the pro-abortion movement's recent political shift: “The campaign comes as the abortion-rights movement is struggling politically. Since 2010, states have enacted more than 200 laws restricting the procedure and dozens of clinics have shuttered. Groups on both sides agree that antiabortion activists have the momentum, with a simpler message — “abortion kills” — and a gut-level emotional appeal.”

Somashekhar quoted from Lanae Erickson Hatalsky from the organization Third Way, who “praised efforts to 'destigmatize' the procedure, which she said is attracting a passionate new crop of young activists to the movement. The effort to tell personal stories echoes a strategy successfully employed by the gay-rights movement, she said, which helped change public opinion by coaxing people to come out of the closet to their friends, neighbors and colleagues.”

However, the reporter never gave Third Way a political label. The group claims that it is “passionately moderate on economic, energy, and education issues, unabashedly forward-thinking on social policy, [and] avowedly internationalist on national security.” One might conclude that “forward-thinking” means leftist, given Hatalsky's cheerleading for the “destigmatization” of abortion.

Somashekhar then pointed out these “passionate new crop” pro-abortion activists have also “grown weary of what they see as an overly apologetic attitude about abortion among their leaders. That has led to some in-your-face tactics. Last year, Emily Letts, a 26-year-old actress and clinic counselor, made waves after posting a YouTube video of her surgical abortion — filmed from the waist up.” She continued that “some mainstream abortion-rights supporters have also turned to jaw-dropping tactics. Last week, Ohio Rep. Teresa Fedor (D) revealed her decision to terminate a pregnancy that resulted from rape in an emotional speech delivered on the Ohio House floor.”

The journalist did include some quotes from pro-life leaders in the midst of her reporting on their opponents' shift:

Marjorie Dannenfelser, president of the Susan B. Anthony List, an antiabortion lobbying group, predicts the approach will fail. Even people who support abortion rights “don't necessarily see it as something to celebrate,” she said. “They want to think about [abortion] as a necessary evil.”

“Abortion is not pleasant,” she said, “and trying to put pretty wrappings around the procedure isn't going to make any difference.”

The “social change” correspondent returned to spotlighting the new Washington, DC abortion “spa” near the end of her article:

Purdy said he got the idea for Carafem two years ago, after more than a decade with DKT International, a nonprofit that promotes family planning and HIV prevention in developing countries. Overseas, he said, getting an abortion is often as simple as visiting a pharmacy. In America, however, some states strictly regulate the abortion pill, citing concerns about its safety, making it virtually impossible to get in some rural areas.

“I was flabbergasted,” Purdy said, to find “that it was easier to get an abortion in Ethiopia compared with the United States.”

Because Carafem will offer only the abortion pill, not vacuum aspiration or other surgical procedures, prospective clients must be no more than 10 weeks pregnant….After receiving counseling and some basic tests, Carafem clients will take an initial pill at the clinic. Purdy's team expects to get them in and out quickly, within about 60 minutes. They will be sent home with a second set of pills to take the next day. The second dose induces the abortion, which resembles a miscarriage, typically within six hours….

Another striking aspect of the project is the design: The clinic will have wood floors and a natural wood tone on the walls that recalls high-end salons such as Aveda….”It was important for us to try to present an upgraded, almost spa-like feel,” said Melissa S. Grant, vice president of health services for the clinic.

If the project is successful, Purdy says, he hopes to expand his model to other states.