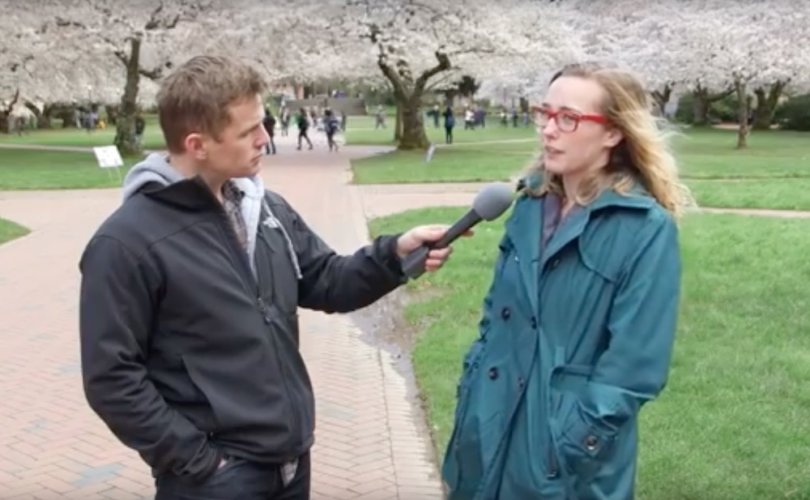 April 18, 2016 (LifeSiteNews) – A new video from the Family Policy Institute of Washington shows just how disconnected from reality many college students are.

The video would be funny if it wasn’t so sad.  Family Policy Institute of Washington Director Joseph Backholm asked University of Washington students a series of questions about gender, race, age, and height identity.  The students’ consensus was largely if Backholm, who is quite obviously a white man, self-identifies as a Chinese woman, then he is a Chinese woman.

Similarly, the students agreed that if Backholm self-identifies as a seven-year-old, although it would be hard to believe at first, they would accept it.

“If you feel seven at heart, then so be it, yeah, good for you,” one student laughed.  “If that’s where you feel mentally you should be, then I feel like there are communities that would accept you,” for wanting to enroll in a first grade class.

According to the students Backholm interviewed, gender identity, race identity, and even age identity are determined by feelings rather than physical reality.  The only idea the students had much difficulty accepting was the suggestion that Backholm, who is 5’9, is 6’5.

The notion that we determine reality for ourselves rather than discover it is the root of today’s push for gender-neutral bathrooms, an end to sex-specific sports, and the recognition of ever-increasing numbers of different genders.

This notion, which has spread itself throughout western culture thanks to celebrities, modern TV, and propaganda disguised as children’s books, is bearing fruit in a variety of troubling ways that would have until very recently seemed more like satire than anything else.

Earlier this month, the Daily Mail reported on the curious story of a transgender woman (a biological man) “becoming” a dragon.

First Richard Hernandez “became” Eva Tiamat Medusa.  Now he’s “becoming” a dragon.  Hernandez has had surgery to remove his nose and ears (so that he can look more like the mythical reptile he self-identifies as), and he’s disfigured his body through eye coloring and facial tattoos of scales.  Hernandez has also had horns implanted on his forehead.

And then there’s Stefonknee Wolscht, the Canadian father of seven who self-identifies as a six-year-old girl.

And don’t forget Nano, a 20-year-old Norwegian woman who self-identifies and lives as a cat.

Perhaps, as Backholm’s video suggests, the notion of height identity is the “Achilles’ heel” of reality deniers.  But don’t count on it.