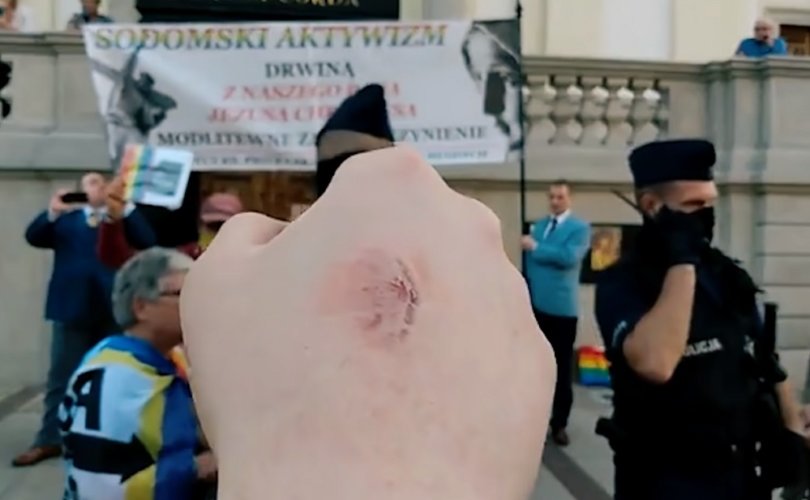 September 23, 2020 (TFP Student Action) — “She bit me on the hand and drew blood,” said Stanislaw Sadowski, a young TFP Student Action (Europe) volunteer attacked during a prayer rally in Warsaw on September 12, 2020.

The attacker, a woman draped in a rainbow flag, disrupted the rosary rally of reparation held in front of the historic statue of Our Lord Carrying the Cross, which was desecrated by pro-homosexual activists last month.

“Was the attacker possessed by a devil? I don’t know for sure, but it’s possible. Because she also ripped my rosary apart and stole some of the beads,” Sadowski said. “Her teeth marks on my hand demonstrate that those who give themselves over to unnatural sin are controlled by animal passion. They might talk about tolerance, but their actions speak for themselves.”

During the night of July 28, pro-homosexual advocates “dressed in black attached a rainbow flag to the statue’s arm and a scarf with an anarchist symbol across Christ’s face, leaving behind a card containing their LGBT rights manifesto,” reported the Catholic News Agency.

The sacrilege against Our Lord prompted faithful Catholics to hold regular prayerful acts of public reparation. Since the incident occurred, members of Krucjata Młodych – TFP have organized daily rosary rallies at the profanation site, drawing many who wish to defend Catholic moral values in Poland.

However, pro-homosexual activists continue to harass, yell, and assault those who peacefully assemble for the daily recitation of the rosary outside Holy Cross Church where the statue of Our Lord, known as Sursum Corda (Lift up your hearts), is located and venerated.

“I was transmitting the rosary on Facebook live when they tried to disrupt the prayer by blowing a whistle in my face,” Stanislaw Sadowski explained. “A woman wearing a rainbow flag blocked my camera with her sign, and then she attempted to rip my phone away. When I refused to let my phone go, she bit me on the hand.”

The day after the biting incident occurred, a larger crowd of one hundred Catholics gathered for the public rosary. Again, pro-homosexual activists arrived to stop the prayer, but they left disheartened seeing such a large group this time.

“With God’s grace, we will not remain silent while Our Lord’s statue is under attack,” continued Sadowski. “If the promoters of sin think we’re about to give up, they’re wrong. Young Catholics will continue to pray here, asking the Blessed Mother to protect Poland and save the family from the homosexual revolution.”

The Metropolitan Archbishop of Warsaw, Cardinal Kazimierz Nycz, condemned the desecration of the statue outside Holy Cross Church:

“The desecration of the historic statue of Christ ‘Sursum corda’ at Krakowskie Przedmieście in Warsaw caused pain to believers, parishioners of the Holy Cross Church and many residents of the capital, for whom the statue of the Savior carrying the cross became a symbol of hope in the most difficult days of the Uprising [in 1944 against Nazism].”

Please consider leaving a comment on the video or in the comments section below to encourage Mr. Stanislaw Sadowski and all the faithful Catholics in Poland. They are fighting the good fight to oppose the sinful advance of the homosexual revolution in their country.

Our Lady of Czestochowa, pray for us!