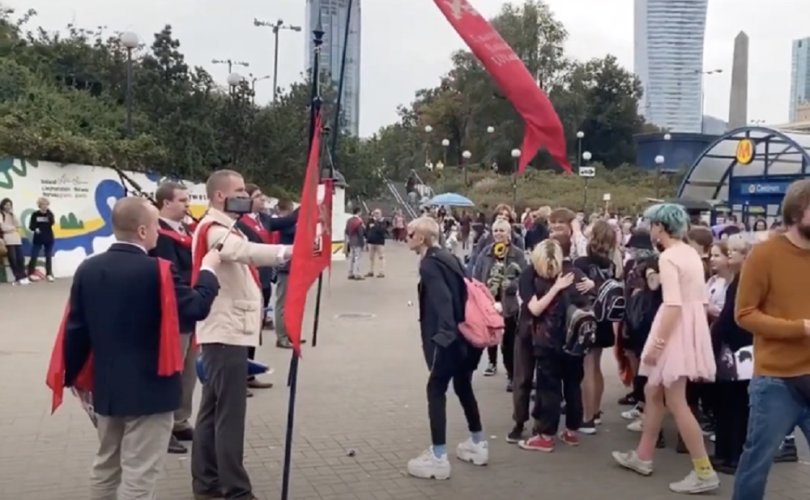 October 5, 2020 (LifeSiteNews) — Videos have emerged showing that homosexual activists and anti-Trump protesters have taken to literally barking in the faces of their opposition.

Members of the lay Catholic group TFP Student Action held a public witness for marriage in Warsaw, Poland. Over the four-day campaign, they engaged in street discussions, handed out fliers, and prayed the rosary in the public square. However, the LGBT activists swiftly rejected rational debate in favor of dog-like barking.

In a post on Facebook, TFP Student Action reports that the protesters resorted to “barking, yelling and spitting.” The response to these public witnesses of traditional values is often heated, but never have the TFP volunteers encountered such a disturbing form of protest.

The bizarre phenomenon is by no means isolated, with similar behavior directed against supporters of President Donald Trump. A video captured in Clermont, California shows protesters harassing Trump supporters on the sidewalk. The recording contains footage of a group of women barking manically and aggressively pushing their faces in front of the Trump-supporters. One woman attempts to reason with one of the barking protesters but is unable to make herself heard. Instead of engaging in a political debate, the feminist group simply attempts to drown out any possible conversation.

A third instance of such behavior was posted on TikTok. The clip shows a man trying to preach in the middle of the street while a group of women attempt to drown him out with barking. The women follow the preacher as he walks around. The footage continues to show a cyclist stopping to reason with the canine imitators as they continued to cause a scene of chaos.

The trend seems to be more sinister than merely laughable. TFP Student Action mentions that such an action demonstrates the effect sinful behavior has upon a person. The pro-homosexual protesters provide an example of how “the sexual revolution debases the individual who gives in to his base animal passions.”

The Catechism of the Catholic Church states that “homosexual acts are intrinsically disordered. They are contrary to the natural law.” (CCC 2357). When one rejects the natural law to such an extent, one also rejects the principles of reason and common sense. The TFP volunteers stated that “sinful [behavior] has an impact on human conduct,” which is attested to by the actions of the barking feminists.

The recurring instances of left-wing protesters resorting to irrational noises instead of intelligible words attest to the truth of these words of the Catechism. Barking in imitation of irrational animals, instead of using the powers of reason, presents an image akin to demonic possession.