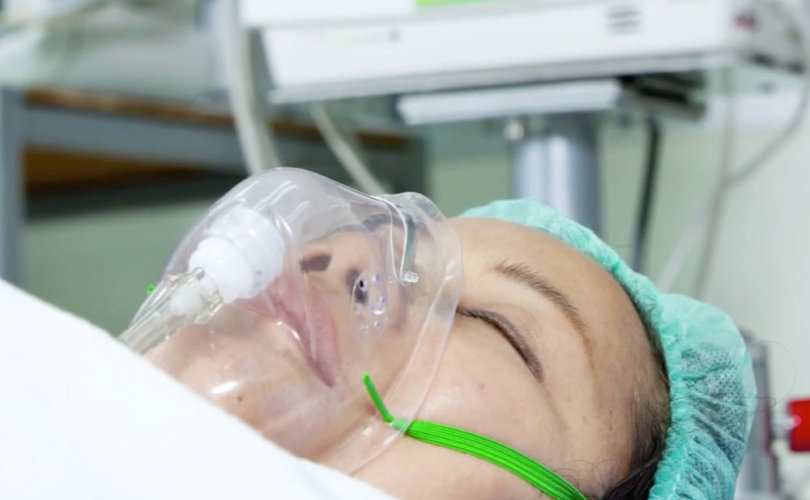 Editor's Note: This is one of the more sensitive issues that LifeSite has reported on for years. Brad Mattes and his Life Issues Institute does a first-rate job in this article, and especially in the video, of revealing many of the disturbing, crucial realities of “brain death” and organ harvesting that the public are not aware of. The video is a “MUST VIEW”.

June 17, 2016 (Life Issues Institute) – Every day patients in America are diagnosed “brain dead,” and more than half, according to one organ procurement individual, become organ and tissue donors. What’s alarming is that most Americans are clueless regarding the subjective nature of a brain death diagnosis.

The more I read on this topic the better I understand the motivation behind the growing popularity of brain death diagnoses. Recently, I’ve discovered a piece that made things much clearer.

Nancy Valko, a legal nurse consultant who’s spent decades in critical care, explains how one hospital can treat a patient that another hospital would declare brain dead.  She points to research published in the JAMA Neurology that showed of over 500 hospitals, there were huge discrepancies in how they determine a patient is brain dead.

In 2010 the American Academy of Neurology guidelines were updated to help provide continuity in brain death diagnoses. However, Valko also points out that an analysis of these new guidelines demonstrates this guidance is opinion-based.

Let that sink in.

Subjective conclusions might explain why Alan Shewmon, MD identified scores of cases where so-called “brain dead” patients continued to live with functioning bodies. These “heart-beating cadavers” (the description given to those declared brain dead) maintained a body temperature, their wounds healed, they fought infections, organs and tissues kept functioning, women continued to nurture their pregnancies and children sexually matured and grew.

Does this fit your description of brain death?

Meet some of the victims created by a diagnosis of brain death and listen to their compelling stories in a two-part TV episode of Facing Life Head-On.

Those interviewed in the Part 1 video report are:

What’s the motivation for medical professionals to risk their credibility and the trust of American citizens? Dick Teresi, who once supported brain death, has written a compelling book called The Undead which pinpoints areas of temptation. An excerpt of his book has been posted online.

There’s certainly the money. Teresi reports the transplant industry generates $20 billion annually, spending over one billion on immunosuppressive drugs and pays transplant surgeons handsomely. Hospitals aren’t left empty-handed either. They receive a “finder’s fee” explained as “administrative costs.” The only ones banned from the money gravy train are the donors and their families.

An aha moment for me was Teresi’s take on many doctors’ approach to human life. The human heart used to be the command center for sustaining life. Now, most MDs consider the brain the be-all and end-all in determining death—with emphasis on the brain stem. So everything else he writes, “no longer counts as human.”

When Roe v. Wade put a price tag on human life, it began a corrosive effect on the value of life by many in the medical community. We see it all the time when a problem arises with a pregnancy or the baby is diagnosed with Down syndrome. Abortion is often presented, recommended or even forcefully pushed by the attending physician.

To doctors who see patients as nothing more than a carbon footprint, those who can no longer give back are considered a drain on resources.  Their value ends when their organs have been harvested for other more productive citizens.

But the Calvary’s on its way. Anesthesiologists, according to Teresi, are leading the medical community questioning brain death. They’ve seen firsthand evidence of signs of life when beating-heart cadavers are sliced into to harvest their organs. One saw a patient spontaneously breathe and move in reaction to the scalpel but the surgeon proceeded over his objections because they had already deemed him unable to recover. I would venture pulling his organs had something to do with his prognosis.

Signs of life are routinely ignored as spontaneous movement. One surgeon called them “bodily reactions to noxious stimuli.” Yes, I’m quite sure an aware patient would consider surgically removing his liver as “noxious stimuli.”

Still, others would call it murder.

This article was originally published on The Life Issues Institute website and is republished with permission.