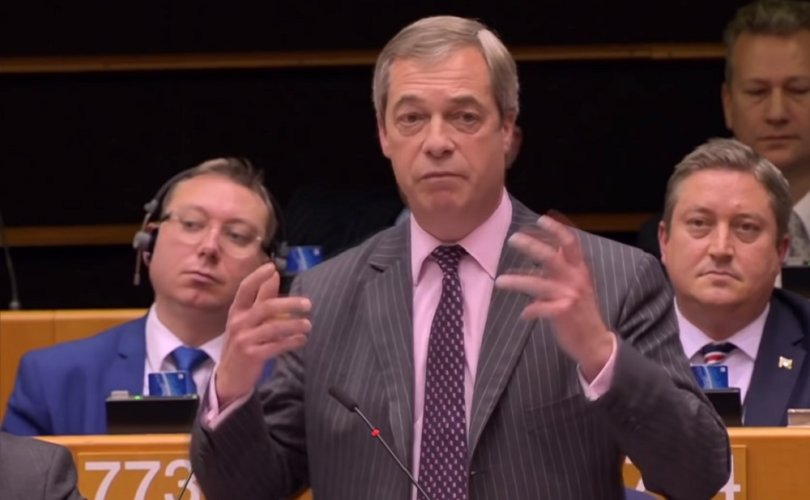 February 4, 2020 (American Thinker) — Brexit went through last week, and Britain is finally independent, free from the clutches of the European Union. It's a great event regardless of how it happens, but in this case, it was cool beyond description.

Here was the great final moment:

Farage and his buddies ended the whole thing by explicitly waving the British flag of sovereignty right in the faces of all the angry little European Commission eurocrats, even as they sputtered and cut off his mic.

Metaphor, anyone? It was the mother of all metaphors, a Britain that asserted its sovereignty in waving its symbolic flag as its soulless eurocrat masters got angry and tried to stop it, not on political grounds, not because they were afraid the other member-states might follow, but on petty rules grounds, little administrative state foot-stamping, insisting on cookie-cutter order and obedience, no exceptions, in the face of a newly freed state that just asserted that it can do what it wants.

The ending was absolutely perfect. The mean librarian–looking woman of no memorable name repeatedly, humorlessly, ordering Farage and his allies to take his waved Union Jack flags down. No flags here! It came off as saying “no sovereignty, you're all the EU's slaves now.” And she had no idea how bad she looked doing it, something that is sure to give other restless states of the E.U. some pause. As she cut off his mic, Farage continued demonstrating his country's newfound sovereignty by laughing at her and refusing. Sovereigns, after all, have flags. Vassal states do not.

It's not the first time Farage has shown such sense of purpose. His preceding speech had it — here's the whole thing here:

And remember his fierce speech to this same bunch of Eurocrats, telling them they laughed at him once but for that now got Brexit. That, too, was electrifying.

Farage not only has a stellar sense of the theatrical; he seems to understand the importance of creating memorable moments and understands how to do them. In a way the self-unaware eurocrats would never understand, he understands the meaning in his movement. That's why his Brexit was so powerful — and is sure to redound to future acts of rebellion against this nasty, petty little eurocracy Britain broke away from.