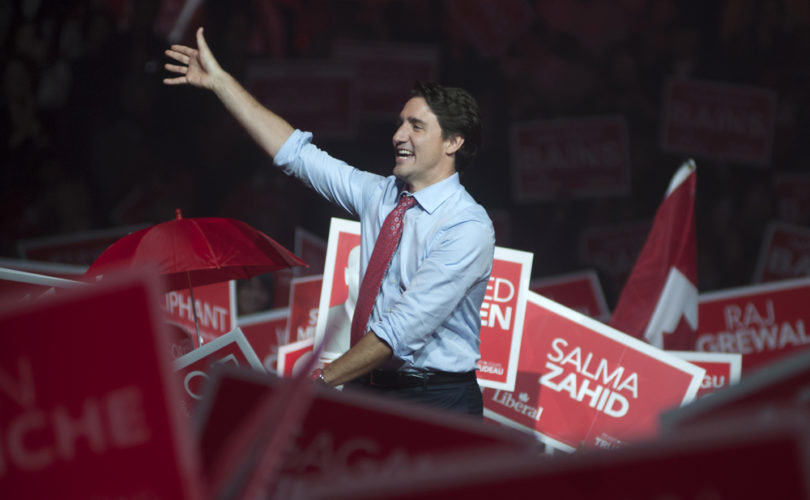 “All evil in the world is due to lukewarm Catholics.” – Pope St. Pius X

October 20, 2015 (ServiamMinistries) — Canada just elected a Prime Minister who is an untested, pro-Islamic, anti-Christian, pro-gay, pro-abortion politician who admires China’s dictatorship, bans pro-life members in his party, and values how the province of Ontario is run (which is more in debt than California, run by a militant lesbian, and promotes a radical sex “education” program that was created by a convicted child sex offender).

Catholics account for 38.7% of the population in Canada. If you include other Christian denominations the Christian population in Canada jumps to 67.2%. In Ontario, the Catholic education system is publically funded. And herein lies the issue – money. Because the Catholic school system is funded by the government and the Catholic Church enjoys tax exemption, the Church hierarchy is unable or unwilling to properly instruct the faithful on matters of politics and certain social issues (i.e. gay marriage and undermining the pro-life movement, despite being an outward supporter) due to the risk of losing its tax exempt status. This was also an issue with Catholic papers refusing to run ads on pro-life federal candidates out of fear of losing their charitable status.

Sure the Canadian Conference of Catholic Bishops sent out an Elections Guide but it was severely lacking and which avoids using the term “abortion” or “unborn child”. In addition, the Guide is silent on same-sex “marriage” and policies that weaken the traditional family unit (i.e. tax breaks for common law couples) and makes divorce easier; meanwhile it has a whole section on protecting the environment.

In this election it was plainly clear that no Catholic in good conscience (which is the problem since many consciences are not properly formed due to the lack of catechesis from fellow Catholics and from the pulpit) could vote for 2 out of the 3 major parties since they banned any pro-life candidates from their parties (not to mention their stance on gay “marriage” and anti-Christian rhetoric).

It is our fault, both laity and clergy, which has allowed this to happen. The reason why there is so much evil in this world and within the Church is because we have allowed money and the world to determine our decisions. St. Paul tells us “And be not conformed to this world: but be you transformed by the renewing of your mind” (Romans 12:2). We have allowed the world into our Church and homes. As a result, we have allowed the smoke of Satan into our sanctuaries and hearts.

Reprinted with permission from Serviam Ministries.