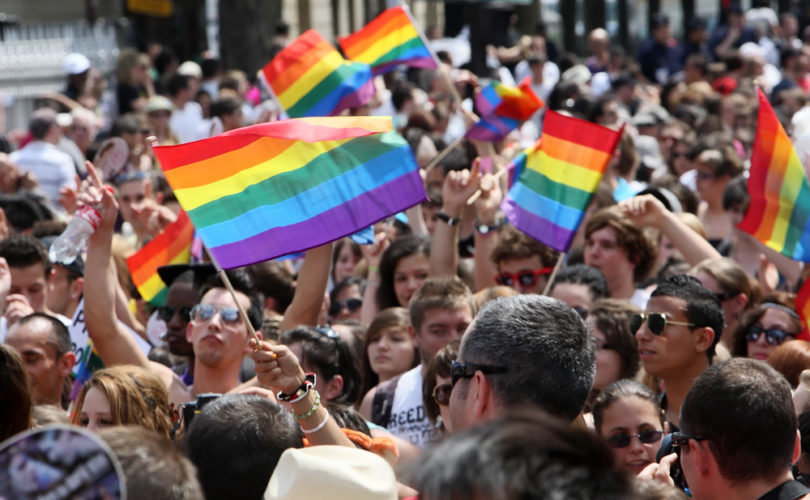 June 24, 2015 (LifeSiteNews) — I was a law student when I first learned of the consequences of not being politically correct concerning homosexuality. A former Miss America’s contract as the citrus growers’ brand-ambassador was allowed to lapse because she had successfully campaigned for the repeal of a pro-homosexual ordinance in Miami-Dade County. She was quoted as saying, “What these people really want, hidden behind obscure legal phrases, is the legal right to propose to our children that theirs is an acceptable, alternate way of life.” She was publicly humiliated — “pied” on national television — and her name — Anita Bryant — became synonymous with something called “homophobia” and “hate speech.”

As a new Air Force judge advocate officer, my first court assignment was to represent the United States in an administrative discharge proceeding concerning a female service member. She was being kicked out of the service for allegedly engaging in homosexual acts. Even as an inexperienced young lawyer, I managed to prove that she had committed the requisite two homosexual acts. She was given a “general” discharge and sent back to the United States.

I don’t remember when thereafter I first noticed that there are only two instances in which “sex” occurs in the “ethics” rules for lawyers. Both are in the same, “anti-discrimination” provision: “A lawyer shall not willfully, in connection with an adjudicatory proceeding … manifest, by words or conduct, bias or prejudice based on race, color, national origin, religion, disability, age, sex, or sexual orientation towards any person involved in that proceeding in any capacity.”

There it was — right there with the prohibition racial discrimination; a lawyer could not “manifest” any “bias or prejudice” based on “sexual orientation.” Hadn’t I done precisely that just a few years earlier? Hadn’t I done that on behalf of the United States government? And yet in that case, I hadn’t set out to prove that the female service-member was a homosexual. My task was limited to proving that she had engaged in homosexual conduct.

Then, suddenly, the issue of homosexual rights — that is, not the right to be a homosexual — but the right to openly engage in homosexual practices and be insulated from any push back from the rest of society — was everywhere. Suddenly it had become a daily staple of bar journals and legal news sources.

I don’t remember when I first noticed that. Was it when California’s voters approved a referendum that “only marriage between a man and a woman is valid or recognized in California”? It must have been before then. It must have been as early as 1993 when I first noticed the enormous consequences of this new so-called right. That was the year Travis County, Texas legalized “domestic partnerships,” in order to attract business investment to Austin, the state capitol.

Not until the spring of 2015, however, did the consequences of this new “right” really began to sink in for me. That’s when I knew that people who for years had thought that the emerging collection of special protections for homosexual behavior was, “no big deal,” were flat wrong. Indiana Gov. Mike Pence had signed a “religious freedom” bill. The backlash, in the name of homosexual rights, was ferocious with the now infamous threats and boycott of a small-town pizza joint whose owners had the temerity to volunteer that they would decline to cater a homosexual marriage celebration.

So, now we know that Anita Bryant was right — at least partly so — when she embarked on her doomed campaign nearly 40 years ago. Ms. Bryant primarily worried about children being confronted with a dangerous alternative way of life. Today, all opponents of special homosexual rights have cause to be worried about their very survival — legal and economic. Anyone who opposes the new Manifesto of homosexuality and gender neutrality/gender identity is at risk.

Using statutes originally and primarily (if not exclusively) designed to protect blacks from discrimination, activist homosexuals have targeted bakers, photographers, and florists, seeking to force all of them to promote a “marriage” that they believe to be immoral. One day, such laws probably will be deployed against writers of articles like this one.

In Washington State, a judge ruled that a florist violated the state’s anti-discrimination laws when she referred a longtime customer to another florist for the wedding flowers for his homosexual marriage. In New York, a husband and wife shut the doors to their business hosting weddings on their family farm, after a court fined them $13,000 for refusing to host gay marriages in their home. In Colorado, a baker faced jail time and stopped baking wedding cakes entirely, after a court ruled that he discriminated against a gay couple when he refused to bake them a cake for their wedding. In Oregon, a court found similarly against another baker, and he may be forced to pay a homosexual couple up to $150,000 as penalty. The New Mexico Supreme Court held that a photographer violated the state’s anti-discrimination statutes by refusing to photograph a gay wedding. Newspapers likely will be forced to publish homosexual wedding announcements, in violation of their existing editorial control over what they publish.

Even pro-same sex marriage, libertarian John Stossel has said that the gay marriage movement “has moved from tolerance to totalitarianism.”

To homosexual activists and their political supporters, it matters not one whit that homosexuality is not consistent with Biblical sexual morality.

In this brave, new, homosexual-friendly world, every licensed professional would be required to embrace the new orthodoxy — to bow down to the idol of “non-discrimination,” or be cast out of his profession. I was co-counsel on an amicus brief against same-sex marriage in the Obergefell case; the Texas Attorney General also filed an amicus brief on behalf of the State of Texas against same-sex marriage. Does that put us in violation of the ethics rule previously quoted?

If the US Supreme Court forces same-sex marriage on the states, unless the states resist such a ruling, the legal system will be employed to squash resistance to the new order. Lawyers who oppose this not-so-brave new world will begin to lose their right to practice law for violation of the new so-called “ethics” of the profession. An Obama Department of Health and Human Services will push for all physicians who stand up for Christian morality to be stripped of their hospital privileges and medical licenses.

According to the advocates of homosexual marriage in the US Supreme Court, the right to a homosexual way of life is enshrined in the penumbras and emanations of the Fourteenth Amendment’s guarantee of Equal Protection — or is it Due Process — or both. (Apparently, this even explains why the Civil War itself was fought.) In fact, this new right is said by these advocates to be so deeply embedded in the Constitution that it trumps the First Amendment’s guarantees of freedom of speech, freedom of religion, and freedom of association. And it empowers government to run aspects of our lives that it has no business controlling.

The same people who first claimed only to want tolerance of their behavior will allow no toleration for other views. Will a physician be forced to perform an artificial insemination for a lesbian couple? Will a lawyer be forced to take a case defending gay marriage? Lawyers are already losing their “traditional prerogative to exercise absolute discretion in the selection of clients….” Provisions designed to advance the homosexual agenda have been incorporated into many state legal ethics codes. In California, for example, it is unethical to “discriminat[e] on the basis of … sexual orientation [in] employment … or [client] representation….” [State Bar of California, Rules of Professional Conduct: Rule 2-400B]. If you doubt this view of the future, read R. Beg, “License to Discriminate Revoked: How a Dentist Put Teeth In New York’s Anti-Discrimination Disciplinary Rule,” [64 Albany L. Rev. 154 (2000)].

I fear that the legal system has lost its way, and the case now before the US Supreme Court could well lay the groundwork for government to assume the sort of totalitarian powers required to force everyone to yield to what most of us hopefully still believe to be immoral.

But it doesn’t have to be that way. Instead, right-thinking people can and should not be afraid to assert their God-given rights. They should not — must not – fail in their duty to teach Biblical sexual morality to their children despite state-sponsored interference. They should accept the challenge and obey their conscience — even if that means refusing totalitarian orders to bow down at the altar of homosexuality. We did not seek this war, but if it comes, we must not shirk from it.

J. Mark Brewer, a former U.S. Air Force JAG officer, is a lawyer in Houston, Texas. He was co-counsel on an amicus brief filed in the Obergefell case before the Supreme Court.