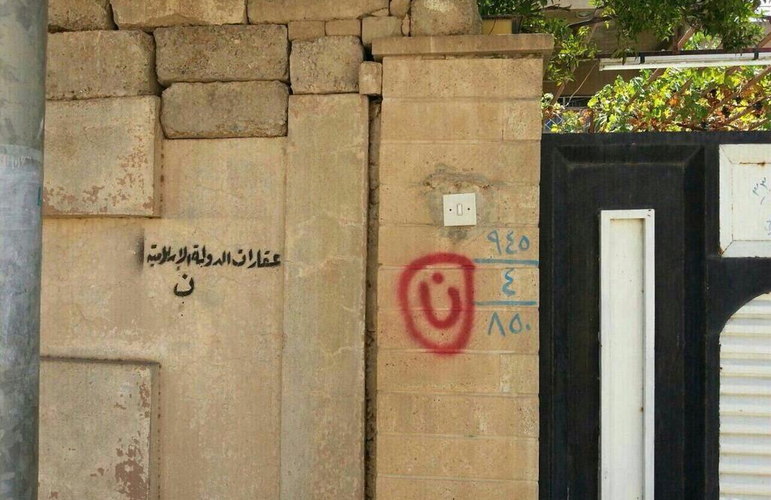 Islamists in Mosul mark Christian homes with an Arabic "N" for Nazarene.

On July 18, the largest Christian community in Iraq, the Chaldean Catholics of Mosul, were given a grotesque ultimatum: leave your ancestral home, convert to Islam, or die.

All but forgotten by the 1.2 billion Catholics of the world, these last Christians who still speak Jesus’ native tongue of Aramaic and live in the land of Abraham and Jonah are being wiped out before our very eyes.

As a way of issuing a thinly-veiled threat, reminiscent of the Nazi persecution of the Jews, the Arabic letter “N” (for Nazarean) has been painted on the outside of the homes of all known Christians in Mosul.

These threats, issued by the fanatical Islamic State of Iraq and Syria (ISIS) known for its bloodthirsty rampage of executions, have been taken very seriously by the several hundred thousand Christians in Mosul who have left with little more than the clothes they were wearing.

At least most of these Christians were able to flee and find temporary protection among the Kurds in their semi-autonomous region.  However the Kurds do not have the resources to defend or shelter the Chaldean Christians for much longer.

On Monday, during an interview on Fox News, Republican U.S. Rep. Frank Wolf, who recently joined with 54 other members of the House of Representatives in a letter to President Obama asking him to act to protect these communities, stated that while Iraqi President Maliki had sent military flights to Mosul to evacuate Shiite Muslims, the US has done nothing to protect the Chaldean Christians.  Rep. Wolf also stated emphatically that President Obama has done “almost nothing” about the genocide taking place.

The silence from the White House is deafening.  But the lack of leadership from the hierarchy of the Catholic Church in America has been shocking as well.

Nevertheless, the plight of these Iraqi Christians is beginning to be taken seriously.   This is due in large part to the heroic efforts of local Iraqi religious leaders like Chaldean Patriarch Sako, who has gone on a whirlwind tour of the world to alert us all of the plight of these Iraqi Christians.  In a statement demonstrating his character, he told the Christians of Iraq last week, “We are your shepherds, and with our full responsibility towards you we will stay with you to the end, will not leave you, whatever the sacrifices.”

Before the U.S.-led invasion of Iraq was launched there were approximately 1.5 to 2 million Christians living in Iraq.  Today, there are believed to be less than 200,000.  The numbers speak for themselves.

Now that the world is beginning to be aware of the genocide in Northern Iraq, many of us ask ourselves: what can we do?  As citizens and as Christians blessed to live in nations with relative peace and security, what can we do?

The answer is quite simple and unexpected.  Demand that our government and church pull its head out of the sand and follow France. Yes, France.

Yesterday, in a heroic gesture of Christian solidarity that would make Joan of Arc proud, the government of France opened wide its doors to the persecuted Iraqi Christians.

”France is outraged by these abuses that it condemns with the utmost firmness,” Laurent Fabius, France's foreign minister, and Bernard Cazeneuve, France's interior minister, said in a joint statement on Monday.

“The ultimatum given to these communities in Mosul by ISIS is the latest tragic example of the terrible threat that jihadist groups in Iraq, but also in Syria and elsewhere, pose to these populations that are historically an integral part of this region,” they added. “We are ready, if they wish, to facilitate their asylum on our soil.  We are in constant contact with local and national authorities to ensure everything is done to protect them.”

With regard to the Church, we should look to the Chaldean Patriarch and the Iraqi bishops who shared their expectations explicitly in an open letter to “all people of conscience in Iraq and around the world” to take “practical actions to assure our people, not merely expressions of condemnation.”  Noticeably, the last section of the letter from the Iraqi bishops, before a final prayer to God, is an expression of thanks to the Kurdish government, which has welcomed them not just with “expressions” of goodwill but, like France, with a sacrificial hospitality.

On Friday, July 25, the United States Conference of Catholic Bishops did issue a statement, but unfortunately it lacked much in terms of leadership or solutions.  We should encourage our bishops to do better than that, be bolder and stronger for our persecuted brothers and sisters, name names and offer concrete sacrificial aid. In a word, be more like the French.

In 1553, Rome welcomed the Chaldean church into the fold of the Catholic Church.  Nearly 500 years later, Catholic Americans must find ways to welcome these persecuted people into our country, into our churches, and into our own homes if need be.

Gualberto Garcia Jones is the Executive Director of the International Human Rights Group, a non-profit organization based in Washington, DC, that seeks to advance the fundamental rights to life, the natural family, and religious liberty through international law and international relations.