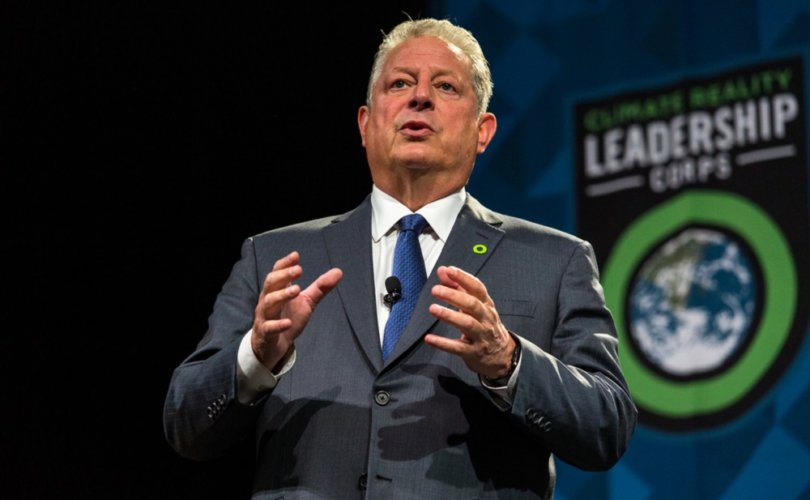 October 18, 2019 (American Thinker) — TIME Magazine published an article on June 24, 1974, titled “Another Ice Age?,” stating that “the atmosphere has been growing gradually cooler for the past three decades. The trend shows no indication of reversing.” This climate theory didn't last long, as the planet apparently began to warm slightly in the latter 1970s, paving the way for the introduction of a new theory called global warming. Unfortunately, the planet failed to warm up as predicted, so yet another climate theory was created called climate change. This all-encompassing label meant that incidents of heat waves, cold snaps, rain, drought, hurricanes, and so on could all be identified as problems resulting from man-caused climate change.

In a 2005 Gallup poll asking people to identify America's biggest problem, global warming didn't even make it into the top ten concerns. Climate change adherents understood that if this lack of concern persisted, they would never achieve their goal of radically reducing fossil fuel use throughout the industrialized world. So marketing efforts to “sell” climate change to an unconcerned public ramped up, starting with Al Gore's 2006 documentary An Inconvenient Truth, which earned Gore an Oscar and Nobel Prize. Even though a British court ruled in 2007 that the film “make[s] a political statement and … support[s] a political programme” and contains nine serious science errors, climate change theorists began to use the movie both here and abroad to influence millions of public school students to become believers in man-caused climate change.

One should not be surprised by a 2018 Gallup poll that shows that 70% of Americans aged 18–34 are somewhat or very worried about global warming. Today, 40 states use a public school science curriculum that identifies mankind as the major cause of global warming, so it is clear that the “selling” of global warming continues to be increasingly effective. The fact that majorities of our Millennials and Generation Z embrace the theory of man-caused global warming is beginning to have a dramatic effect in America. Millennial Alexandria Ocasio-Cortez, who has over 5 million followers on Twitter, recently said the world is going to end in 12 years if we don't address climate change. Fighting climate change is an essential part of Ocasio-Cortez's proposed New Green Deal legislation, which, if enacted, will require the U.S. to nearly eliminate all use of fossil fuels within ten years. Most of the Democrats running for president, the mass media, celebrities, and the Left are all singing the same refrain as Ocasio-Cortez, warning of a rapidly approaching man-caused Climate Doomsday, which can be avoided only by taking immediate and drastic action. For example, at a September town hall on climate change, former vice president Joe Biden said “We have to take combustion engine vehicles off the road as rapidly as we can.”

However, many millions of Americans, especially those over the age of 30, are not so sure that the climate doomsayers have the facts on their side. Therefore, I propose that we have a nationally televised debate on carbon emissions and man-caused climate change. Let Americans hear the relevant facts so they can decide for themselves if we need to completely gut our economy now in order to save the planet later.

Maybe George Soros or Tom Steyer would like to put up a big pot — say, 10 million dollars to the winner, just to make things interesting.

The list of topics that could be debated is large and expansive. Is climate forecasting really a collection of computer programs, each of which contains hundreds if not thousands of assumptions about the future? Do these computer programs purport to tell us the climate in 50 years without including clouds or sunspots in their formulations? Have these predictive programs been successfully applied to any other fields of study? If a team of scientists is smart enough to create a computer program that can accurately crunch together thousands of variables and assumptions over a fifty-year period to create “the settled science” of man-caused climate change, then why wouldn't that same dream team of scientists take a few days over Thanksgiving and create a computer program to predict stock prices on Christmas Eve? Take a little break from turkey and football, become richer than Jeff Bezos, and have a Happy New Year, right?

Climate change advocates claim to tell us, within a tenth of a degree, how hot it was in the very distant past, even though reliable historical temperature records go back only several decades, if even that far. Were thermometers calibrated to one tenth of a degree 40 or 50 years ago? Were situational records kept for each instrument back then, so you could determine today if a thermometer placed in service 50 years ago was located under a tree or had a road or building constructed next to it at any point in time? If a thermometer's location evolved from a cornfield to being in the middle of a five-acre parking lot, wouldn't that drastically change its readings? How can we adjust for these changes accurately if we don't even know they occurred?

Let's debate the content of Al Gore's documentary, An Inconvenient Truth, which is still being shown widely to schoolchildren across the USA. Since Gore's inflammatory and never materialized claims of impending catastrophes were based on “settled science” produced by climate change computer models, what lessons should we learn? Should we still be showcasing Gore's documentary if it's been debunked?

There are other debate topics that would be interesting. Looking back, has any country besides the U.S. decreased carbon emissions in the last ten years? Looking ahead, which countries will be increasing their emissions the most? Since today's biggest polluters also have rapidly rising levels of carbon emissions, would it make any difference at all if the U.S. cut its carbon emissions by 50%? What would happen to the U.S. per capita income if emissions were cut by 50%? If cutting U.S. emissions by 50% will have no effect on an impending climate crisis, what should America do now? Should we invade the biggest polluter, China, next year in order to save the planet?

We need to have this debate now so Americans can see if we are blithely skidding toward an irreversible Climate Doomsday.

Post-debate, let's enlist the IRS to help individuals to fight climate change by using their own personal funds. Amend the IRS Form 1040 by adding two checkboxes, so taxpayers could increase their taxes by either 50% or 100%, with all of the additional money going to fight climate change. Currently, the loudest advocates for climate change tend have the largest personal carbon footprints, leaving them open to the charge of being hypocrites. Overnight, climate activists would have a golden opportunity to become hugely credible as they shared their tax returns with the public, proving that as true believers, they're actually putting their money where their mouths are. Taking a public stand, more money for the government, and saving the planet — sounds simply irresistible, doesn't it?