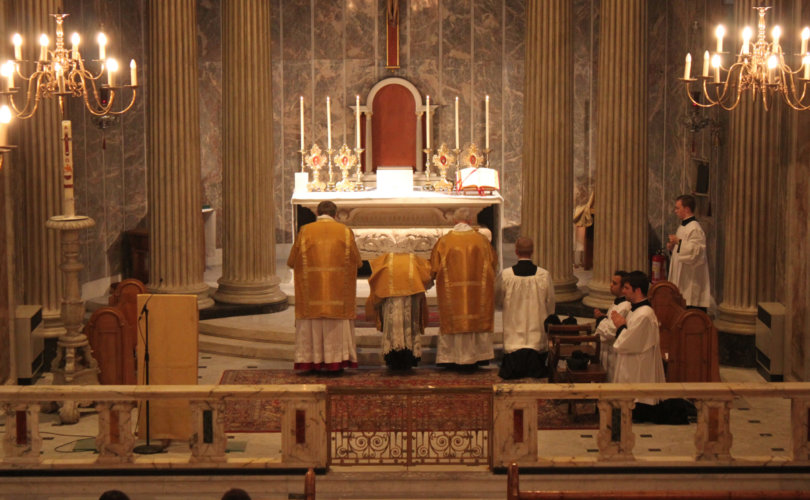 February 24, 2020 (CatholicCulture.org) — With Ash Wednesday just a few days away, I have been thinking about the need for repentance: not just my own need (which is great), but the need of the whole universal Church. For all of us, acutely conscious of the scandals within the Church, Lent is a good time to recall the words of St. Peter to religious leaders who had betrayed the Messiah: “Repent, therefore, and turn again, that your sins may be blotted out, that times of refreshing may come from the presence of the Lord.” [Acts 3:19]

We — all of us, all the baptized — have been charged by the Lord to preach the Gospel to all nations. But instead of spreading the faith, we are watching its decay. In societies that were once solidly Catholic, old parish churches are closing. Even where the churches remain open, young people are filing out the doors by the hundreds of thousands, planning never to return.

Something is terribly, terribly wrong — and has been wrong for years, because the mass exodus (no pun intended) began several decades ago. It should come as no surprise that, in an institution that lost its zeal for evangelization — its enthusiasm for its central mission — other signs of corruption would eventually appear.

Where should we look for a solution to this problem, a remedy for anemic faith? Let’s look to the “source and summit of the Christian life,” the Eucharist. When we think of life in the Catholic Church, we generally think first of Sunday Mass — and so do any non-Catholics and lapsed Catholics who are watching for signs of life. Every believing Catholic recognizes the Eucharistic liturgy as the source of his spiritual life. But do we think of the Sunday Mass in our parish as the summit of our spirituality? Is this the best we can do? Really?

To be sure, the liturgy can never be beautiful enough, never reverent enough, to convey the full meaning of the Eucharist. But are we trying? Or have we slipped into a lackadaisical routine, accepting a liturgical approach that does not even attempt to convey the transcendent glory of the Mass?

A friend who served as a parish cantor in one busy parish memorably remarked that the liturgical approach of the “anticipatory” Mass on Saturday evening was marked by the desire to “get ’em in and get ’em out.” The music, the preaching, and the perfunctory observance of the rubrics were all marked by a desire for efficiency: to allow people to fulfill their Sunday obligation with a minimum of effort, a minimum of reflection. The bare-bones ritual was not complicated by devotion.

My Traditionalist friends often blame the “get ’em in, get ’em out” (GEIGEO) approach on the Novus Ordo. I beg to differ. I am old enough to remember serving as an altar boy at the Tridentine Mass, for the priest in my boyhood parish who could, and often did, rush through a low Mass in 12 minutes. He was clearly a proponent of the GEIGEO liturgy, years before Vatican II. I say again: these problems are not new.

Today, however, traditionalist Catholic communities are not troubled by the GEIGEO approach, because those who seek out the Extraordinary Form are searching precisely for reverence in the Eucharistic liturgy. Not so the Novus Ordo, the form that must serve the reverent and irreverent alike in a typical parish setting. And because the Novus Ordo allows for dozens of liturgical options, there is always a temptation to choose the simplest option, the quickest, least demanding option. Get ’em in, get ’em out.

Several years ago, when I traveled to Ireland for the first time, I was taken aback by the lightning-quick celebration of Mass in the parishes that we visited, chosen more or less randomly along our way. When I voiced my dismay to Irish friends, they told me that the tradition of a lickety-split liturgy had developed during the years when Catholicism was forced underground, and priests celebrated Mass quickly to avoid detection. That explanation failed to convince me. First, because it’s been quite a while, now, since Catholicism was illegal in Ireland. Second, because after years of celebrating Mass covertly, in basements and valleys, I would expect Catholics — finally freed from persecution — to give the Mass every bit of grandeur they could muster. I don’t think the British could be blamed for the slapdash liturgies that I experienced. The priests who were rushing through the Mass in the early 21st century were never hunted by Queen Elizabeth’s deputies. They were, I strongly suspect, succumbing to the GEIGEO mentality.

So this Lent, my plan is a program of repentance for my own lack of proper reverence for the Eucharist, and for my irreverence that has so deeply infected the life of our Church. I encourage other Catholics to join me in that campaign. We can argue later about how to make the liturgy more beautiful, more reverent, more fitting. For now let’s focus on a realization that the first step toward a liturgical revival — which is, necessarily, the first step toward a Catholic spiritual revival — is the recognition that what we have been doing is not good enough. We’ve been inviting the Lord into our parish homes, and then treating Him as a servant rather than an honored guest. Until we acknowledge that lack of love, the Catholic revival cannot begin.

So although I’m a selfish man, and I enjoy my creature comforts, and I shrink from mortification… Still when I reflect on the troubles of the Church, and when I read the ugly headlines, when I see the empty pews, I realize that Lent can’t come too soon.