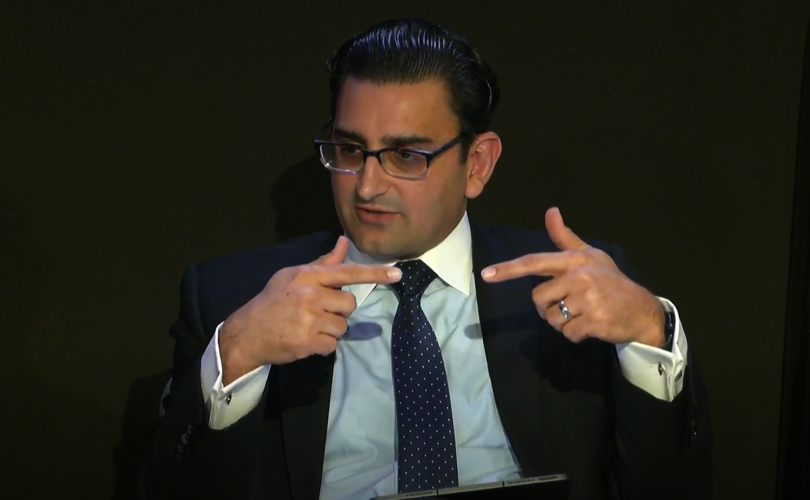 DAVOS, Switzerland (LifeSiteNews) — A World Economic Forum (WEF) speaker said during Thursday’s “Keeping the faith” panel discussion that he was told not to use the words “God” and “religion” during his talk.

“Before I jump in, I want to offer a trigger warning for the audience. As I was preparing for this session … they told me, ‘Don’t use the words religion, faith, and God,’ and so I just ask people to translate that to ‘mindfulness,’ ‘purpose-driven,’ ‘spirituality,’” said Farhan Latif, president of the El-Hibri Foundation, to the laughter of the audience and fellow panelists.

While the panelists may have brushed it off as a trivial, harmless request by the WEF, Latif’s anecdote is profoundly revealing and deeply concerning: The WEF, in fact, has zero interest in and even disdains God and religion.

As the panel discussion made clear, the WEF and its representatives are only interested in “spirituality” or religion insofar as they serve the Davos agenda — ostensibly a more “sustainable” world. As journalist Frank Wright has pointed out, this agenda hinges upon the successful “management” of human beings.

In fact, God and authentic religion are a threat to the WEF’s agenda, not only because they recognize humans’ unparalleled value and dignity among creation (precluding their subservience to the “environment”), but because they establish aspirations beyond the merely material — that is, that there is not only a business of lives to save but souls.

This is why objective morality is so distasteful to the Davos crowd, modern academia, and popular culture. It is a distaste that properly belongs to power-hungry, authoritarian governments that do not abide a power higher than the state (think China).

A prime example of the disordered values of the Davos crowd that can only be born of secularism: They believe the growth of families must literally be suppressed because more human beings supposedly pose a “threat” to global stability.

Worse, many of its members believe that overpopulation is already harming the earth and society, such as WEF Agenda “contributor” and primatologist Jane Goodall, who asserted during a WEF 2020 panel discussion that many of the world’s problems could be solved if only human population rates were drastically lower.

Accordingly, the organization advocates for widespread birth control and access to abortion to “improve” social conditions. The mindset behind this can be summed up thusly: Human beings are a burden, and therefore each individual human being is a burden. You are a burden to society.

On the other hand, authentic religion holds that it is unthinkable to sacrifice a single human being in service of a so-called “greater good” (such as through abortion), and moreover that a new human life, within the context of true marriage, is always a desirable good. Children are never an unwanted “burden,” as is also implied in the practice of contraception.

Other fundamental tenets of true religion pose a threat to the WEF Agenda, such as the idea that children have a right to a mother and a father, obviously barring the death of one; the idea that the innocence of children should be fiercely safeguarded; and the idea that it is preferable for a mother to stay at home to raise her children than to leave them at daycare so she can pursue her career goals. Notably, the needs of children are never mentioned when these issues are discussed by the elites and their fellow leftists. The issues are instead framed in terms of “freedom.”

And yet, ironically, freedoms core to the well-being and flourishing of humanity are simultaneously quashed by the Davos elites. Freedom of speech and of movement, the right to public worship (The WEF backed the suppression of all of this during COVID), the right to property and to enjoy the fruits of one’s labor, these must all be subservient to the “greater good,” as the WEF elites see it.

In place of God and religion, vague, impotent, inoffensive notions of “spirituality” are proposed by the WEF. As the “Keeping the Faith” discussion showed, WEF panelists are hard-pressed to discuss even truly spiritual matters. The spiritual implies that which transcends visible realities. Very little of the sort was discussed during the WEF “faith” talk.

Rather, the subjects of discussion were “giving back” to the community, obviously something you don’t need spiritual “faith” for; economics and an arguably distorted presentation of Catholic social teaching; and targeted religious identities, which is fine and good, except that there was little mention of the beliefs behind those identities. The closest the panelists got to any homage of God and a transcendent spiritual reality was Latif’s mention of Muslim prayer.

Most emblematic of the spiritual and religious emptiness of the WEF were the remarks given by Jonathan Greenblatt, director and CEO of the Anti-Defamation League (ADL), and former Special Assistant to President Barack Obama.

Asked to share “reflections” about his personal faith “journey,” Greenblatt had almost nothing to say.

“Judaism is something that I do privately,” said Greenblatt, mentioning that he keeps a Kosher diet before proceeding to talk about his career and the ADL. One can’t be blamed for being left with the impression that Greenblatt himself is not a man of faith, but of expedient business, especially considering that under Greenblatt, the ADL endorses abortion, the killing of innocent children, as a “Jewish value.” This was described as “blasphemous” by Orthodox Jewish Rabbi Yehuda Levin of New York.

The ADL is known for denouncing mainstream conservative views, such as those on marriage and sexuality, as “hateful”; and for painting many ideas that imply no animus against Jews and even can be held by Jews themselves, with a broad brush as “anti-semitic.”

For example, the ADL considers the belief that “Jews stick together more than other Americans,” held by about 70% of Americans, to be an “anti-Jewish trope.” The ADL, moreover, conflates views about the state of Israel with attitudes toward the Jews as a people, framing criticisms of Israel as “anti-semitic.”

The ADL leverages such criticisms to push for the suppression of free speech, such as when it called for a Twitter ban of former President Donald Trump.

What Greenblatt and his fellow panelists were not afraid to say was that we must be “inclusive” to people of “all” faiths. But as practiced by the WEF, what this means is that traditional religion and morality are increasingly kicked aside, until all that will be permitted are hollowed-out shells of religion, which adopt as their new god the global, WEF-endorsed state, and its “environmentalist” cult.