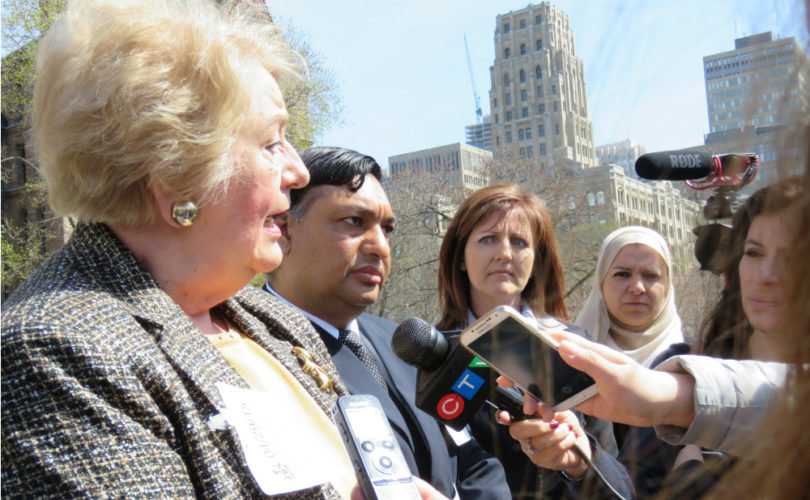 TORONTO, Ontario, September 4, 2015 (LifeSiteNews) – A delegation of family, religious and ethnic groups met at Queen’s Park on 29 April, 2015 for an hour and half with Ontario Premier Kathleen Wynne to discuss her controversial sex education curriculum. Gwen Landolt, National Vice President of REAL Women of Canada, was a part of the delegation and one of its speakers. The Premier seemed at a loss to come up with responses to our questions and statements about the curriculum. Ms Wynne appears to exist in her own bubble, where no one has raised these questions with her before.

We then politely inquired, what then, was the purpose of all students taking this course? Was it so that all children can learn how to become sexually active? Ms Wynne was unable to make a response.

2. When one of the members of the delegation asked why very young children (grade 3) were being introduced to homosexuality and same-sex marriage, Ms Wynne stated that some children were living in same-sex families and they should not be excluded in discussions about families. When the delegation brought to Ms Wynne’s attention that, in fact, less than 1% of children are living in same-sex families, so what about the other 99% of children? Ms Wynne was startled by this statistic, but had no response.

3. We raised our concern about teaching consent for sexual activity to, as early as, grade one (six year olds). We noted that under the Criminal Code consent to sexual activity is restricted to those 16 years old and over. We also referred Ms Wynne to section 21 of the Code which provides that it is an offense to: aid, abet or encourage an individual to enter an unlawful act. Would this consent provision then not set up teachers and school boards for future legal problems?

Ms Wynne appeared to be unaware of these provisions in the Criminal Code and asked her assistant to make a note of them. Rather late in the game to do so.

4. When the delegation asked why the Premier refused to withhold the curriculum so that the parents could be consulted, her response was that there had been five years of consultation with the experts, and as a result, there could be no further delay in implementing the program.

The delegation’s response was that it didn’t matter if there had been 10 years of consultation, if the curriculum still wasn’t right, it shouldn’t be implemented. There was no response to this.

Ms Wynne does not grasp the fact that sex education establishes social and moral norms, and her curriculum seeks to change the current norms. It attempts to adopt values diverging from the wide spectrum of religious, cultural and social diversity in Ontario.

In short, why is the province trying to set social and moral norms, rather than the parents, who properly have this responsibility?

It is significant that, in June, the Ontario Liberal government launched a $1.8 million campaign to “inform” people about the importance of the revised sex education curriculum. The ad campaign, however, is a farce since it doesn’t even mention the sex education component, but merely promotes the program as being an update on health issues. It is a deceitful campaign meant to mislead the public.

If anyone is misinformed on the sex education curriculum, it seems to be Premier Kathleen Wynne.