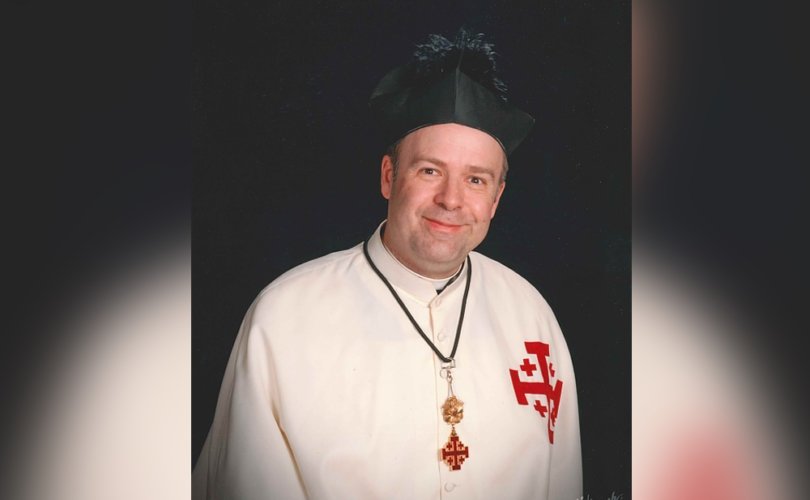 September 4, 2019 (LifeSiteNews) – It was quite a communion of saints that tried to destroy the Rev. Erik Richtsteig, the new pastor of St. Ambrose Parish in Salt Lake City, for the alleged sin of “hate speech.”

The Salt Lake Tribune blared its outrage in a July 31 headline, “Utah Catholics protest priest who’s shared posts that are anti-LGBTQ, anti-woman and pro-assault rifle,” and a 2,100-word story that had room only for accusers.

Parents from the parish school had scoured Fr. Erik’s every online utterance, finding just blasphemies to the progressive religion to try and oust the priest before he’d even arrived.

Righteous leftism and a warped version of social justice were clearly at stake in the effort, causes too important to let any contrary voice or explication of Catholic teaching mar the beauty of the hit.

Still it failed, due to the reality of Richtsteig’s character, his quarter-century of service as a priest, and the authority of Bishop Oscar Solis, head of the Diocese of Salt Lake City.

The bishop likely forced the group’s Hail Mary pass to the Tribune after he refused to condemn an innocent man and rescind the appointment of Richtsteig to St. Ambrose and its affiliated J.E. Cosgriff Memorial School.

Conservatives, traditional Catholics, and anyone not on the shaming-and-doxing side of the partisan divide have seen this extreme game before, and we’re not having it.

Fr. Erik’s real sin, the one disguised as hate, was being a defender of the faith, an emphatic conservative maybe, who does not shrink from Roman Catholic teaching. He states it out loud.

What’s more, he had the audacity to do it on Facebook and his own blog – to be irreverent, sometimes sarcastic, and outspoken in his conviction, and to express himself prolifically about religion, politics, culture, and a multitude of interests.

That was unforgivable to these Christians, the true reason he had to be silenced, shamed, removed, or re-educated.

They admitted the problem eventually, way down in the piece, where the parish and school were described as having “carved out a space for more liberal ideas and more welcoming views and more diverse voices in Salt Lake City.”

In this particular welcoming liberal space, one parent wondered if she could even shake the pastor’s hand.

So, the elaborately constructed narrative went like this: Fr. Erik posed a threat to the well-being of school children and the parish community because of his posts, deemed “homophobic,” “misogynistic,” “hateful,” “hurtful,” “bigoted,” “intolerant,” “horrifying,” and “hate speech.” And “pro-assault rifle” as well, whatever that means.

Some of the group’s suggested correctives were that the priest be made to apologize, ordered to never speak of guns or LGBTQ individuals, and that his homilies (“talks,” the Tribune called them) be checked in advance before every Mass.

Checked by whom, the Ministry of Truth? And what was the hate exactly?

An image and comment posted by the priest of a cartoon gnome spewing a rainbow were “horrifying” and “homophobic.” It could not possibly be a welterweight jab about gay Pride Month, exasperation over a monthlong celebration of gayness.

Misogyny and bigotry? Strong charges that should demand strong proof. There wasn’t any.

In Richtsteig’s case, the act of merely liking, following, or sharing a page/meme/comment constituted punishable wrongthink. Among the counts in the newspaper’s indictment was the revelation that Fr. Erik approved of a page advocating, “Obama has to go.” Ah yes, hate speech.

Just as appalling as the hit was the censoring zeal of the Tribune and its ditching of basic objectivity. The newspaper was too down with the cause to question the pretense or push back against the notion of coercing a faith leader’s silence.

Instead, it piled on with its own verdict. Reporter Courtney Tanner affirmed that the shares and likes “promote hate of LGBTQ groups and mock women,” an editorial opinion transposed as objective fact.

Children would have to interact with the priest for Mass and sacraments, she noted repeatedly, the implication ominous.

Were this not just a hit piece, other viewpoints would have mattered, like those from St. James the Just Parish and St. Joseph’s School in Ogden who knew the priest best.

How about a single non-protestor from St. Ambrose, an orthodox teacher, or a Catholic with more than hashtag awareness of Roman Catholic doctrine and catechism?

Truth and understanding might have benefitted from those “diverse” voices, but none were allowed. In a 2,100-word news space there certainly was room.

Richtsteig called same-sex attraction a disorder, the story vaguely offered, as if it were a concept in isolation. Like it or not – and this group evidently does not – Church doctrine says a great deal about disorders, distinguishes between act, individual, and inclination, and rejects any concerted or aggressive push by groups to “seek public approval of homosexual behavior.”

It is straightforward from the Vatican, U.S. Conference of Catholic Bishops, and Catechism of the Catholic Church: “Basing itself on Sacred Scripture, which presents homosexual acts as acts of grave depravity, tradition has always declared that ‘homosexual acts are intrinsically disordered.’ They are contrary to the natural law.”

Homosexual inclination is “objectively disordered,” according to the faith, “an inclination that predisposes one toward what is truly not good for the human person.”

The church also makes clear that same-sex attracted individuals must be “accepted with respect, compassion, and sensitivity. Every sign of unjust discrimination in their regard should be avoided.”

However, “distant neutrality” in regard to teaching is not permitted, and pastoral care that departs from church teaching or silences it is “neither caring nor pastoral.”

Pope Francis was said by the Tribune to be accepting of LGBTQ individuals. Not one word  further was added about his denunciations of gay “marriage” and gender theory, which he has described variously as a “global war trying to destroy marriage,” “ideological colonization,” and a threat to “God’s plan for creation.”

Distinctions and clarity were suppressed in this episode amid woke rage, or disbelief possibly, that a Catholic priest would uphold the faith bluntly and that actual Catholic teaching would be taught at a Catholic school.

Parochial schools state up front in their parent handbooks – and occasionally have to reiterate during a school year – that they are founded upon Catholic teaching. Some of them mean it.

Missing from the newspaper’s account was the perspective of Nancy Essary, principal of St. Joseph’s Elementary in Ogden, who was invited to attend a special meeting of Cosgriff’s school board to provide insight on Richtsteig’s long association with her school.

Children at St. Joseph’s “loved him and enjoyed seeing him in the building,” according to Cosgriff board minutes summarizing her remarks. Not one St. Joseph’s faculty member in nine years ever had an issue with him.

He frequently visited students, led faith instruction for middle schoolers as well as teacher in-services, and had many requests to hear confessions.

None of that found its way into the Tribune, which said it had a recording of the meeting. Likewise banished, any parishioner from St. James the Just, where Richtsteig was pastor for 16-plus years, more than half spent commenting, blogging, posting and podcasting.

Readers might have been interested, too, in a fuller, less-biased look at the man. Such as this:

He was six-months-old when his Marine Corps father was killed in action in the Vietnam War; he grew up Latter-day Saint before converting to Catholicism at age 15, one of millions of teenagers impacted by the election of Pope John Paul II; he served in various parishes throughout Utah and was previously a chaplain to the Air Force Reserve.

Just before leaving St. James for St. Ambrose, it was Fr. Erik who helped another military family defy death’s sting and ease their warrior’s way to God, offering the funeral Mass for Army Sgt. 1st Class Elliott Robbins, a Green Beret medic who died in Afghanistan.

The military background should have tempered the histrionics over “assault weapons.” Same with his gun advocacy in light of the fact that he personally experienced a shooting – the attempted murder of a St. James parishioner while Mass was under way on Father’s Day, 2013. That usually makes one a “survivor” in media lexicon.

If the son of an artillery officer supports packing a more modest caliber and is a strong proponent of armed self-defense after a shooting, that’s inappropriate? No, it makes sense.

John Paul II used more than a photo-shopped image to combat Soviet oppression. St. Michael the Archangel brandishes a “weapon of war” in a battle waged against darkness until eternity.

A father who gave his life for the nation and a pope who fought communism were powerful influencers apparently, shaping the priest’s outlook on America, freedom, totalitarianism, good and evil, not to mention politics, religion, God, country, and family.

That was the profile offended parents might have seen had they looked beyond identity politics and liberal pieties or even met the pastor first before declaring him persona non grata at their welcoming blue sanctuary.

For leftists, the Catholic faith, like America, must be fundamentally transformed to be welcoming or even good. The teachings of Catholicism, timeless across millennia, remain bitter, clingy, and deplorable, too naturally aligned with conservative ideology and politics.

Among orthodox Catholics, the sacrament of confirmation makes us defenders of the faith, as it is now and always will be. For us speech is not violence, catechism is not hate, and there will be no silencings or apologies.

Laurie Maddox is a former reporter with The Associated Press and Salt Lake Tribune, and a lifelong Catholic.