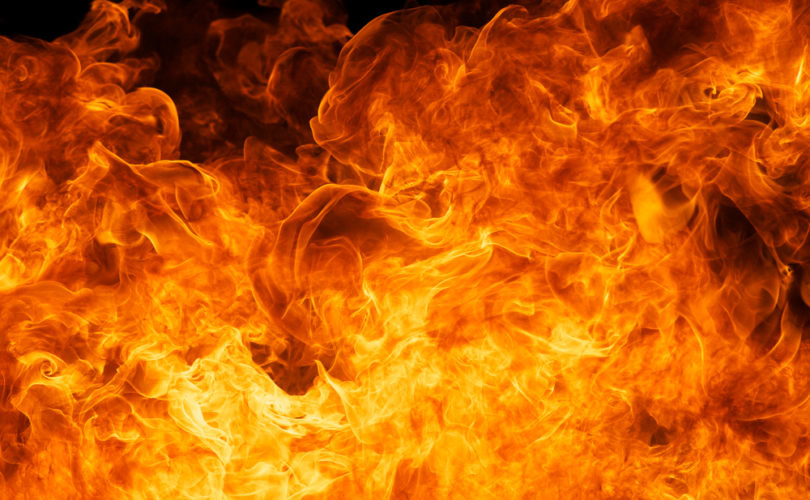 October 29, 2015 (TheBridgehead) — I’ve now gone through the second set of leaked Planned Parenthood videos, the three part series entitled “Fetal Disposition,” or in layman’s terms, how to dispose of the babies once they’ve been turned into corpses. I’ve seen more in my work as an anti-abortion activist than I can possibly write, but for some reason, this series has left me more nauseated and heartbroken than the worst abortion footage I’ve ever seen. There is something so ghoulish, so hideous, and so cannibalistic about this panel of calm, well-spoken women discussing how to deal with the piles and piles of irretrievably shredded infants. It’s times like this when I shudder for our society, for our churches, for our communities, for all of us, as we calmly tramp down sidewalks while the sewers beneath us run crimson with the blood and body fluid of our silent, murdered offspring. Little girls and little boys should bring about questions like pink or blue? Not crematorium or freezer?

I wish I could say that the preceding sentences were just a literary device to help you understand the abortion reality. They are not. As the panel discussion on what to do with the children who are inconvenient even in death proceeded, Renee Chelian, who owns three abortion clinics around Detroit, revealed her struggles. “The garbage disposal [for aborted fetuses] was the completely legal option which made me sick to my stomach,” she said to sympathetic murmurs. “Because there were 45 clinics in the Detroit Metro Area, and many of them using garbage disposals, so I was busy contacting everyone. You have to stop, this cannot be! If it can’t be on the front page of the New York Times you shouldn’t be doing it, any of you. And they consistently showed me a 40-year-old law in Michigan that said pathological waste was fine to go in the sewer system.”

During the Q & A, a Canadian abortionist made an appearance in the discussion. She had no problem with corpse disposal: “I don’t know about the rest of you, but certainly ours is going to Portland,” she said. “The facility is a waste energy facility.”

Babies in the sewers. The alternative to the options listed by another provider: “Burial, cremation, incineration, or donation.”

Chelian’s conundrum continued as she hunted to find a place to dispose of her fresh kills. She visited funeral homes first, “who ultimately started talking about how much a body weighs before they could figure out how much it cost, had to go from pounds to ounces and they were like, ‘We don’t even know how to charge you for this.’ They showed me a body bag, and I was like, ‘Dude, we need to go to a Tupperware jar.’ In which case we started talking about the freezer jars we used. [It] really freaked them out because all the fetal tissue is mixed together after we do our products of conception check and they just wanted me to leave.” The crematoriums didn’t want the babies, either. No surprise. No one does.

Babies in Tupperware coffins. The heads, arms, legs, and torsos of tiny children mixed together with the body parts of their tiny brothers and sisters, like a basket of guillotined heads sitting at the edge of a French gibbet. The Sexual Revolution’s victims are tinier, quieter, and there are oh, so many more of them.

Chelian was frustrated, and her voice was strident. Stericycle turned her down because of successful pro-life exposé campaigns. To laughter, she joked about giving the children back to their parents. “We were really tempted to give the fetus back. We could just give it to everybody in a gift bag and they could figure out what to do with it. It was their pregnancy. Why is it our problem?”

Babies in pieces, in gift bags. But the parents rejected the gift of children once, of course. And they couldn’t put the children back together again. Even if they tried.

It got worse for Chelian. She was like an evil little old woman who lived in a shoe, and she didn’t know what to do. “Nobody wants to talk about dead bodies,” she almost shouted. “And nobody but me! I’m just saying. There was a point when Stericycle fired us that I had five months of fetal tissue in my freezers. We were renting freezers to put them in. It was all I thought about, was fetal tissue. Like, I was so consumed with fetal tissue, I was ready to drive to upper Michigan and have a bonfire. And I was just trying to figure out, you know, how I wouldn’t get stopped. Or you know, how far into the woods would I have to go to have this fire that nobody was going to see me? I mean, it was the worst. I dreamed about how to dispose of fetal tissue.”

Babies in bonfires. And we pro-life activists are the radicals for thinking they should be in cribs.

Chelian was worried, because if she didn’t find a way to get rid of the bodies, then the pro-life activists could shut her clinics down with health code violations. “I talked to the researchers, and they said we want your tissue, but we don’t want [all] of your tissue. And one of the things the crematorium told me that I found interesting—who’s going to pick up the ashes? And I was [like], I don’t know, do I have to? We can’t just dump them, somebody’s going to be responsible for them. Which also made me really worried. Did I have to open a room somewhere handing out bottles of ashes?” There was laughter. Chelian was okay with that. “I want you to laugh about this. This is funny. It’s funny in a really sick way. We have a bunch of material here for a comedian this morning. Dead bodies.”

Babies in ashes. Ashes to ashes. How does the rhyme go? Ashes, ashes, we all fall down.

So what’s the answer? Chelian thought she had a few. On-site incinerators do the trick quite nicely. And there’s even a few options they experimented with that are friendly towards the environment. “We actually found some green technology that was like a dishwasher, plug it in like a dishwasher,” she announced proudly. “You add some kind of chemical—I’m using the word chemical real loose, it’s green, that’s all I know, use a green chemical. Europe is using it—they don’t have enough space. You run this cycle, and then it goes to a sewer system, which sounds like a really great idea, but I can’t remember if it was approved in the United States or just in some progressive state like Washington. But what I’m going to have to do is get [approval from] my health department, when we bring in a portable dishwasher, cremating through chemicals.”

Babies in chemical dishwashers. An issue, Chelian said as she closed her presentation, that we all have to grapple with. I don’t think she meant that the way she should.

During the Q & A, a Canadian abortionist made an appearance in the discussion. She had no problem with corpse disposal: “I don’t know about the rest of you, but certainly ours is going to Portland,” she said. “The facility is a waste energy facility.” At the time, as news sources reported, the remains of pre-born Canadian children were being burned with the trash to help power the society that discarded them. But then again, as Chelian asked, what else do you do with “a whole jar of first-trimester patients?”

Vigilance, always vigilance, Chelian warned the other abortionists. The anti-abortion activists were everywhere—if only she had known—and “they don’t care about truth.” One woman piped up to concur, worried that the cemetery that accepted the ashes from the incinerated fetuses might “turn into a memorial for dead babies or something.” A chuckle rippled through the hall. That would be unacceptable. These babies, after all, must be forgotten. They must. That is why abortionists exist.

After questions were over, David Daleidan walked about the hall, chatting up various abortionists, asking about “fetal tissue procurement” to find out which clinics would sell the fetal remains. “Could we get liver from you?” he asked one middle-aged blonde woman.

“Liver’s a big thing right now,” she said with a cackle and a creepy smile.

With that, David Daleidan and his fellow undercover journalist “Susan Tennenbaum” left the hall to attend to the Biomax table at Booth 306. Fade to black.

I really wish people trying to defend abortion clinics selling off the body parts of the children they’ve just dismantled would look deep into their hearts and ask themselves if they can really believe that this is something a civilized society does. I’ve written this every way I can, and I’ve tried to make this reality as real for people as possible. I’ll try one more time. What do you think the Planned Parenthood version of this little rhyme would be?

What are little girls made of?

Sugar and spice, and everything nice.

That’s what little girls are made of.

Shall I give it a try?

What are little girls made of?

Liver and brain, for financial gain,

That’s what little girls are made of.

I hope you shuddered. I know it’s dark. But David Daleidan has given us a window into a nightmare that we should not look away from. He’s lifted a mirror up to our culture, and if we recoil, we should ask ourselves how we allowed it to become this way. The answer is that we did it meticulously, we did it intentionally, and we even entrenched it into our healthcare systems. As G.K. Chesterton once wrote, “To be wrong, and to be carefully wrong—that is the definition of decadence.”

It’s fitting that as I write this, the neighborhood outside is decorated with the macabre gravestones and other fake plastic horrors that people seem to find necessary around Halloween every year. That, for a moment, reminds me of the only Hope our culture has.

Because after Halloween, comes Christmas.

Author’s Note: Thanks to Lynn Mills, the amazing activist who took down Dr. Jack Kevorkian, for help with transcription. The first piece in this series can be found here. More to come…