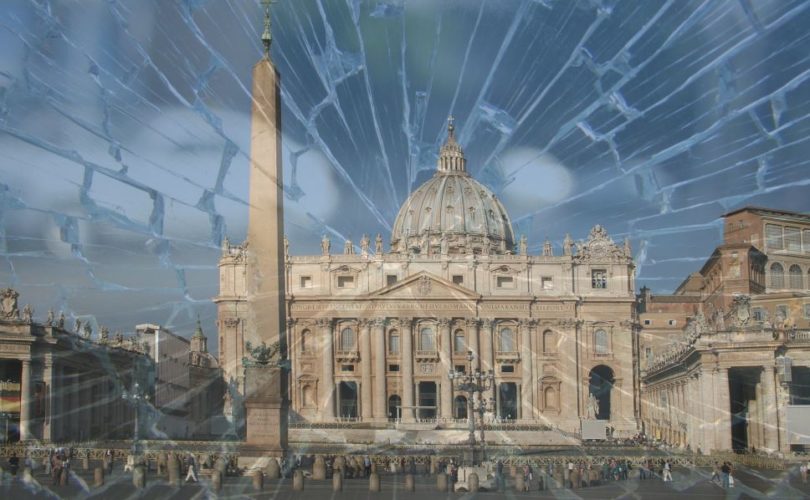 I have also lost faith in the pope. No, I’m not denying the papacy of Francis. I acknowledge him as the real pope, just as I acknowledge the hierarchy as real bishops. Rather, I’ve lost faith in him as a person, and in his ability to lead the Church. The Barque of Peter has become a rudderless vessel, not because there is no pope, but because the pope is too distracted to steer the ship. By saying I’ve lost faith in Francis, I’m saying I have no confidence in Francis as a leader. So he receives a “vote of no confidence” from me.

In short, my faith in Christ, and the Church he established, remains intact. My faith in that Church’s current leadership has been irreparably shattered, and it would take a lifetime to rebuild, if it can be rebuilt at all. Right now I actually have more faith in the US Federal Government than I do the hierarchy of the Catholic Church, and that’s really saying something, because people who know me will tell you: “Shane has almost no faith in the federal government at all.” Right now, I think it’s far more likely that Martians will land in Times Square, and world peace will be subsequently declared, before our Catholic hierarchy will do the right thing on homosexual abuse and cover up within their own ranks.

I think this is a more well-reasoned approach to the problems in the Church. Too many former Catholics tell me they’ve lost faith entirely, and they often cite the leadership of the Church as their reason why. Their complaints are legitimate, but their solution is absurd. If you’re one of those people reading this right now, this is for you…

Don’t leave Christ because of Judas. Don’t let bad priests and bishops chase you away from your baptismal birthright. Why would you give these evil men the satisfaction of driving you away from your home! You are Catholic. You deserve better than the leadership we have, we all do, but this is (unfortunately) what we’ve been scourged with for now. So I would like to propose a challenge to you. Rather than walk away from Christ, and the Church he founded, do as I am doing instead. Become a good Catholic in spite of these Judases. For they say the greatest revenge is living well. Become Catholic again, but do it in a way that counters bad priests and bishops, and deprives them of their ability to control, manipulate and abuse. Pick up an old Baltimore Catechism (yes, it’s still legitimate) and read it. Read the Bible too. Start with the Gospels. Start praying again, the way you remember, and maybe say a rosary or two. Then, before you return to mass, try to find a good one, where the Judases in the Church have had little influence. Start by looking here.

The rest of this is addressed to all faithful lay Catholics. I’ve come to the conclusion that there will be no reform from the hierarchy. Based on what just happened at the US Bishops Conference in Baltimore, and the likely players responsible for it, I am now 100% convinced the Extraordinary Meeting of Bishops in Rome this February will be a joke. I am convinced it will simply be an elaborate attempt to confuse the faithful into believing that something concrete will be done, when in fact nothing will happen at all. An appearance of transparency will be presented, but there will be no real transparency. An impression of reform will be presented, but there will be no reform. All of this because the men at the top, including the pope, are more interested in protecting their golden calf of allowing homosexuality to flourish in the hierarchy.

So where does that leave us, lay faithful, in all of this? While we are powerless to reform our Church, we are not helpless. We actually do have some options…

My last post was an open letter to the US Catholic Bishops which I wrote to them the week before the Baltimore Conference. I didn’t expect any kind of response from that, but what we got was even far worse than what I imagined. We literally got nothing — a great big fat zero — along with plenty of hints from both the Conference and Rome that cover-up will continue to remain the status quo. I ended by saying this would be my last letter to them, and I have no desire to communicate any further. I meant it. As the title of this essay says, I’ve lost faith in them entirely. So that open letter was the last they’ll ever hear from me.

This post, directed toward my regular readers, is likewise intended to be my last essay on the subject of homosexual abuse and cover up. This is mainly because I really have nothing more to say. I’ve already said everything I can on the matter. I may update my social media feeds with some of the latest current events on this topic, but I really don’t have any more essays to write or recommendations to make. This whole mess will soon play out with law enforcement, and perhaps a little divine intervention along the way. So there is nothing more that I can add.

We have been burdened to live through the saddest era in the history of the Catholic Church. What has happened is worse than the Arian Heresy, and I believe future generations will acknowledge that. For the Homosexualist Heresy, and all the sexual sin that accompanies it, especially the sexual abuse of minors, is a challenge to the very nature of Christianity itself. If homosexuality (sodomy or “gay sex”) is not a sin, then there is no such thing as sexual sin at all, and the entire 2000 years of Christian teaching on the matter has been one big lie. If sexual sin does not exist, then the sacrifice of Christ’s crucifixion is cheapened. The need for the gospel is lessened, and the disciplines of the Church are irrelevant. The entire Christian faith hinges on this matter. For if there is no sexual sin, then most people don’t sin at all. The average person doesn’t murder, or steal, or slander others. The average Catholic goes to mass on Sundays, honors his parents, and rarely ever uses the Lord’s name in vain. What is adultery when a man can “marry” another man? What is adultery when a married woman can have a fling with her girlfriend on the side? If all of this is to be made permissible, against the Scriptures and Catechism, as the homosexualists desire, then the Church itself becomes nothing more than a social accessory, totally optional to the Christian who can define his “personal relationship with Jesus Christ” any way he likes. Jesus himself becomes just another Buddha or Krishna for the modern man to choose at his personal discretion. I have no desire to be part of a “church” that looks like this. Either there is such a thing as sexual sin or there isn’t. Either what the Scriptures tell us is true about homosexuality (sodomy or “gay sex”) or the Scriptures are false. Erase the condemnation of homosexuality from the Bible, and you erase the sacrifice that atoned for it on the cross.

I know the truth. I believe what the Scriptures tell us. I believe what the Catechism teaches us. I believe what the Catholic-Christian faith has always taught us. I will not support those who deny these things, either by word or deed, and they won’t get a dime of my money, nor will I regularly attend their parishes and cathedrals. I have lost faith in them. I’ve decided to move on now, strictly to orthodox parishes and bishops who are accountable and transparent. I’ve checked out of the corrupt-mainstream Catholic Church. There is nothing more I can do or say. If you’re reading this, and you’re ready to leave the corruption behind, this is how you do it legally and properly.

Editor's note: This article first appeared on Complete Christianity here. It is reprinted by permission of the author. Shane Schaetzel is a certified catechist in the Catholic Church.