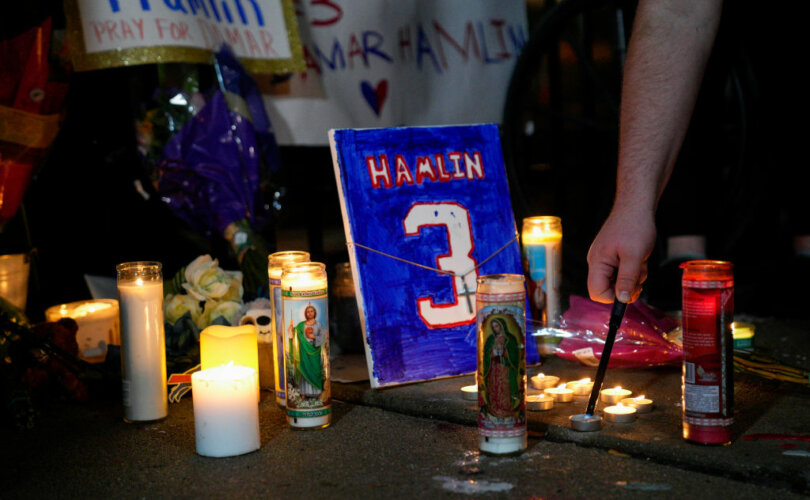 A detail as fans hold a candlelight vigil for Buffalo Bills safety Damar Hamlin at University of Cincinnati Medical Center on January 3, 2023, in Cincinnati, OhioPhoto by Jeff Dean/Getty Images

(Children’s Health Defense) — Damar Hamlin’s sudden collapse on live TV during Monday night’s NFL game triggered an avalanche of media coverage, with experts weighing in on what might have caused the 24-year-old player’s cardiac arrest after what appeared to be a routine tackle.

Some news outlets quickly concluded Hamlin’s heart attack most likely was caused by commotio cordis, a rare phenomenon that occurs when a small and extremely fast-moving projectile — such as a baseball, hockey puck or lacrosse ball — strikes the chest in a precise location, disrupting the heart’s rhythm. The condition affects about 10-20 people per year, usually teenage boys.

Most mainstream media reports rejected the theory that Hamlin’s cardiac arrest might be linked to COVID-19 vaccines, using terms such as “far-right,” “vile,” “anti-vaxxer” and “conspiracy theorists.”

McCullough, an internist, cardiologist, epidemiologist, and leading expert on COVID-19 treatment, explained the possible role of the vaccines in cardiac arrest and other heart injuries among athletes.

He explained that any physician watching replays of Hamlin’s collapse immediately starts thinking through a differential diagnosis of what could have caused it.

Let me tell you that I did see head and neck contact with a tackle, which is not uncommon at all in football. Remember that the shoulder pads have a breastbone protector, [a] pretty substantial breastbone [protector], so they take helmets in the chest all the time.

McCullough acknowledged that when a baseball hits an unprotected breastbone, it can precipitate a cardiac arrest, but said he was not aware of that happening in pro football, leading him to rule out commotio cordis.

READ: Dr. Peter McCullough: COVID jabs should be the presumed cause of unusually high excess deaths

“And as I watched things unfold it was relatively clear that [Hamlin] was in a primary cardiac arrest,” he said.

McCullough believes there is a public health obligation to disclose what happened. He said:

This is a player who is employed by a team, and the team and the league mandated the vaccine very publicly.

So we have a situation where we have a public figure, the public employer mandates the vaccine in a very public manner, there is a disclosure that 95 percent of the players have taken the vaccine, and the FDA says the vaccine causes myocarditis and the published peer-reviewed literature says that it can be fatal.

“This is not a time for privacy,” McCullough said. “The public needs to know that diagnosis because he was under one of these mandates and this happened on the national and world stage.”

McCullough said numerous athletes have collapsed on the field and been resuscitated, but that in all cases there has been “airtight privacy” about whether they were vaccinated and what their diagnosis was.

“I think the Hamlin case is going to break through all this,” he said.

Now in professional athletes, many of the causes of primary cardiac arrest [for] a man his age have already been ruled out because the athletes are so heavily evaluated and scrutinized before they’re ready to play.

So the leading cause of an athlete having a cardiac arrest on the field is hypertrophic cardiomyopathy. And that is a memorable thickness of the heart.

He acknowledged that other congenital conditions or rare syndromes could be at play, but added:

I think what is looming large and the reason why there was so much emotion… the elephant in the room that no one could bring up — until I brought it up yesterday on national TV as the first public figure — is COVID-19 vaccination.

McCullough cited increasing evidence that the vaccines can cause heart damage, particularly among men. There are now more than 200 peer-reviewed studies on COVID-19 vaccine-induced myocarditis.

“Two papers: Mansanguan and Le Pessec have given us the point estimate of about 2.5 percent of people sustain heart damage when they take the vaccine,” he said.

In more than half of heart damage cases, there are no initial symptoms, but according to McCullough:

A scar is formed in the heart. That scar is readily identified by MRI. And that scar becomes the setup for an abnormal electrical rhythm that circulates around the scar — it’s called ventricular tachycardia.

And then, it degenerates into ventricular fibrillation, causing the sudden adult death syndrome. This is the leading thinking of what’s happening with athletes on the field.

They reported that since the introduction of the vaccines in 2021, there have been 1,598 cardiac arrests in the football leagues, of which 1,101 were fatal. Prior to 2021, the average number of cardiac arrests was 29 per year.

READ: The real pandemic has just begun, and it’s COVID shot-induced heart attacks in the young

According to a Centers for Disease Control and Prevention (CDC) report, there have been only 131 cases of vaccine-related myocarditis. But peer-reviewed studies in top journals, Pfizer and Moderna’s own data, and the CDC’s Vaccine Adverse Event Reporting System, or VAERS, data show 24,950 reports of myocarditis/pericarditis following COVID-19 vaccines.

Other experts weigh in on Hamlin

Dr. Sanjay Verma, an interventional cardiologist, wrote that it was nearly impossible to cause commotio cordis with a shoulder pad hit to the chest, which appeared to be the case, because shoulder pads are designed to absorb precisely such a shock.

We don’t have to be equivocal and say it probably wasn’t Commotio Cordis. I can say with 100 percent scientific and clinical confidence that such a scenario (right shoulder pad hitting left precordium as I saw on multiple replays) is virtually impossible and cannot be deduced conclusively the night of the incident. This has never before occurred in 103 years of NFL.

Verma reported that there is an increased risk of sudden cardiac death with aerobic activity for six months following myocarditis, which is why current professional society guidelines recommend restriction from competitive sports for six months after myocarditis diagnosis. The risk of death can persist for 12 years, Verma said.

The study, which investigated increased numbers of post-vaccine sudden deaths among athletes, found that existing research unanimously and strongly suggests that a “hyper catecholaminergic state” is the critical trigger of the rare cases of myocarditis due to components from SARS-CoV-2 mRNA, potentially increasing sudden deaths among elite male athletes.

In both cases, the athletes had histories of myocarditis that appeared to have caused or worsened the arrhythmias. In one case, the myocarditis was undiagnosed and the player died.

The authors were able to distinguish these episodes from commotio cordis by the presence of underlying myocardial scarring. According to Berenson, they concluded that the aftereffects of myocarditis raise “the risk of lethal ventricular arrhythmias following blunt chest trauma.”

According to commentator Toby Rogers, Ph.D., M.P.P, Big Pharma took to #MedTwitter within minutes of Hamlin’s collapse to “flood the zone with a lie — that the heart attack was definitely the result of ‘Commotio Cordis,’” to set a narrative that would become unbreakable.

At the same time MedTwitter told us — vaccine skeptics — to STFU and that any speculation on our part was dishonoring Damar Hamlin and his family.

So first they lied and then they tried to silence us.

Big Pharma’s success in manufacturing consent for the vaccines, he argued, has been so successful that people cannot see the damage being done to them.

Rogers likened what Pfizer did to Hamlin to what Derek Chauvin reportedly did to George Floyd — forced nine minutes without breath.

Pfizer literally killed a black man (stopped his heart for 9 minutes) on live TV and then told all Americans to shut up if they know what’s good for them. That’s the sort of power that Julius Caesar, Stalin, and Mao possessed — and now that raw murderous totalitarian power is in the hands of the most ruthless corporation on earth. And the establishment has made it clear that we will be banished from polite society if we talk about the actual cause.

So that’s the world we live in. Pharma has killed several hundred thousand Americans and millions more around the world with the clot shot. Then they killed a guy in the first quarter of Monday Night Football and there will be no investigation and we’re all just supposed to nod our heads and blame it on coincidence.

Dr. Allen Sills, the NFL’s chief medical officer, on Wednesday told the press that the NFL is investigating “every possible cause” behind Hamlin’s cardiac arrest. In the statement, he listed commotio cordis as a possible cause, along with potential congenital or other abnormalities. He did not mention vaccine-induced myocarditis.