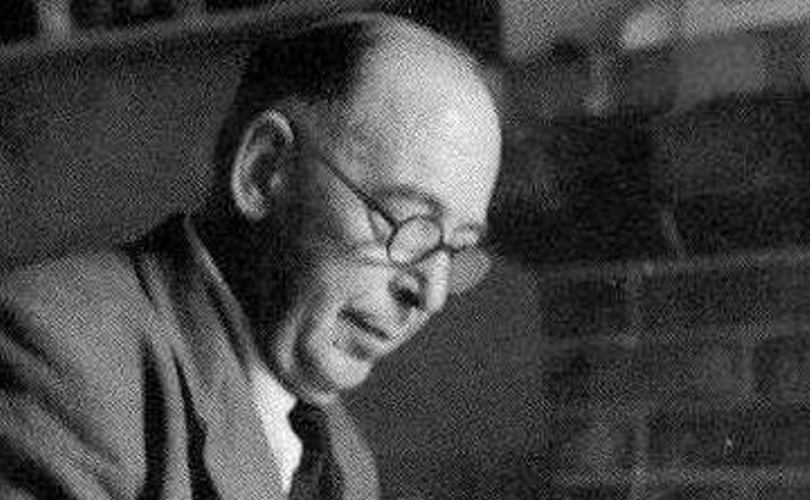 Nov. 29, 2013 (LiveActionNews.org) – Last Friday marked the 50th anniversary of the death of C.S. Lewis, arguably the most influential Christian thinker of the 20th century. Lewis, a close friend of J.R.R. Tolkien, was a Cambridge professor, an Oxford don, and the author of such beloved classics as The Chronicles of Narnia, The Screwtape Letters, The Great Divorce, Till We Have Faces, The Abolition of Man, and Mere Christianity. Decades after his death, his works continue to inspire and challenge millions around the globe.

So how did this towering Christian intellect feel about abortion? In short, he considered it a sin. In a personal letter dated July 1951, Lewis made this statement:

However, to my knowledge, Lewis did not talk much about abortion. This is not really surprising, since he lived in a time when the abortion debate was far less prominent than it is today. Nevertheless, can we be sure that Lewis would have given his approval to the pro-life activism of the Church? Did not Screwtape urge his young nephew to focus on “the borderline between theology and politics”? Lewis clearly feared that political agendas would eclipse Christ, and in the end, Christianity would be valued only as a means to social justice (see The Screwtape Letters, chapter 23).

While we cannot say with certainty how C.S. Lewis would have approached this issue, his stepson provides an important perspective. In a lecture delivered at Regent College in 1992, Douglas Gresham made the following comments about his stepfather (known as “Jack”):

I am convinced that if C.S. Lewis were alive today, he would think he had died and was living in Hell. And it’s our fault. If you presented Jack with a world in which 60 million children are murdered before they have a chance to be born, he would be absolutely horrified. If you presented Jack with a world which produces 10% more food than will feed every man woman and child on it, and yet 800,000 Sudanese are to die in a month’s time because they are not being fed, he would be aghast. If you showed Jack a world in which our young people are constantly fed on a diet of gratuitous sex and violence on television, video tapes, [and] advertisement hoardings, he would be absolutely horrified. And the reason I can say that with safety is that anyone who has committed his life to Christ must feel exactly the same way. I don’t like to think what Jack would feel about today’s world. And I think the apathy of many of us Christians would horrify him equally.

As I hear this challenge, the words of another enormously influential Christian author echo in my head: “But, what can any individual do?” This was the question posed by Harriet Beecher Stowe in the final pages of her historic novel, Uncle Tom’s Cabin. Her answer is as relevant to us in 2013 as it was in 1852:

There is one thing that every individual can do, – they can see to it that they feel right. An atmosphere of sympathetic influence encircles every human being; and the man or woman who feels strongly, healthily and justly, on the great interests of humanity, is a constant benefactor to the human race. See, then, to your sympathies in this matter! Are they in harmony with the sympathies of Christ? or are they swayed and perverted by the sophistries of worldly policy?

This is, of course, why Gresham is absolutely right to attribute such politically charged emotions to the great defender of “Mere Christianity.” At the end of the day, Lewis was all about Jesus. As he explains, “Every Christian is to become a little Christ. The whole purpose of becoming a Christian is simply nothing else” (see Mere Christianity, book 4, chapter 4). But as Gresham well knows, no one who has truly experienced this transformation can feel anything but horror, revulsion, and anger in the face of that butchery the sophists of the world call “choice.”