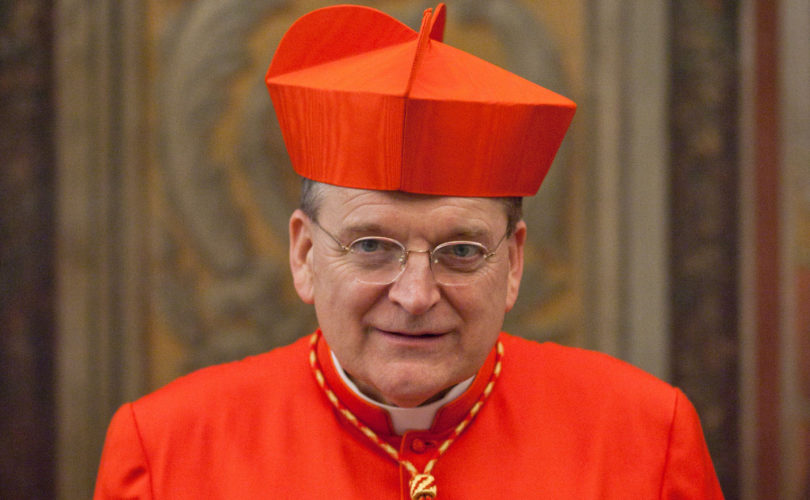 Join Cardinal Burke and 615,000 other concerned Catholics and sign the Filial Appeal to Pope Francis asking him to clearly reaffirm Chruch teaching on marriage at the Synod on the Family. Click here.

ST. LOUIS, Missouri, September 15, 2015 (LifeSiteNews) — On Sunday, September 13th I had the honor to be one of the hosts for His Eminence, Raymond Leo Cardinal Burke, here at a dinner/lecture in the Clayton Plaza hotel ballroom, sponsored by the St. Louis lay apostolate “Credo of the Catholic Laity,” to which I am the spiritual adviser.

His Eminence was warmly welcomed and introduced by the retired Auxiliary Bishop of St. Louis, the Most Rev. Robert Hermann, and then spoke to an audience of over 300 about “The Truth of Christ in Marriage”. He discussed spiritual, social, doctrinal and canonical aspects of the current crisis affecting marriage and the family in Western culture, warning that this crisis has led to serious confusion and even rebellion within the Church herself. Cardinal Burke emphasized that in our increasingly secularized and hostile culture, more weight than ever is now falling on the shoulders of Catholic parents in giving children a formation, by word and example, in what real Christian marriage is. Along with the Church's authentic and perennial teaching, he said, this sound family formation will prove to be the main source of guidance for children and adolescents, as the basic means by which parents pass on Christian truth in word and deed to the next generation.

Cardinal Burke recommended the well-known 2014 “Five Cardinals'” book, Remaining in the Truth of Christ, and again expressed strong disagreement with Cardinal Walter Kasper's proposal of admitting some divorced and civilly remarried Catholics to Holy Communion. His Eminence also noted that certain problems could arise in connection with Pope Francis' new marriage nullity legislation, promulgated on September 8th. He commented respectfully that these revisions to the Code of Canon Law, which among other things eliminate the required confirmation of nullity decrees by a tribunal of second instance, will require “very careful interpretation and application” in the light of the Church's long canonical and doctrinal tradition. Cardinal Burke referred to his own chapter in the aforesaid book, in which he recalls his earlier experience as a Monsignor in the Apostolic Signatura during the period 1971-1983, when the 2nd instance tribunal confirmation of nullity decrees was almost completely suspended in the United States. Cardinal Burke repeated in his lecture what he said in the book: that the American experiment in “streamlining” the nullity process led in practice to a serious laxity which became widely perceived as “Catholic divorce.” It seems this was one reason why the 1983 Code restored the obligatory second instance review (which had been introduced by Benedict XIV back in 1740).

Another point emphasized by Cardinal Burke is that too often today the law of God regarding marriage and chastity is being presented as just an “ideal” – as something which often requires a level of heroic sanctity that is supposedly beyond the capacity of ordinary Christians. This in turn gives rise to false ideas of “mercy” which would allow admission to the sacraments of some Catholics living in sinful situations, on the grounds that it is in effect impossible for them – at least in their present situation – to reach that “ideal”of chastity. His Eminence stressed that, on the contrary, it is the clear teaching of Sacred Scripture and the Church that God's abundant grace will always be sufficient for his children to resist any temptation and to obey his commandments, provided they sincerely turn to him in humility, confident faith and persevering prayer.

After his talk, in answer to a question as to what Catholics should do if the upcoming Synod of Bishops should take a “strange turning,” His Eminence gave an immediate two-word answer that drew a big round of applause: “Stay faithful!”  Those two words well summarize the whole thrust of Cardinal Burke's courageous and outspoken witness at this time of division and uncertainty over grave moral issues in today's Church. May God bless, strengthen, and protect him!