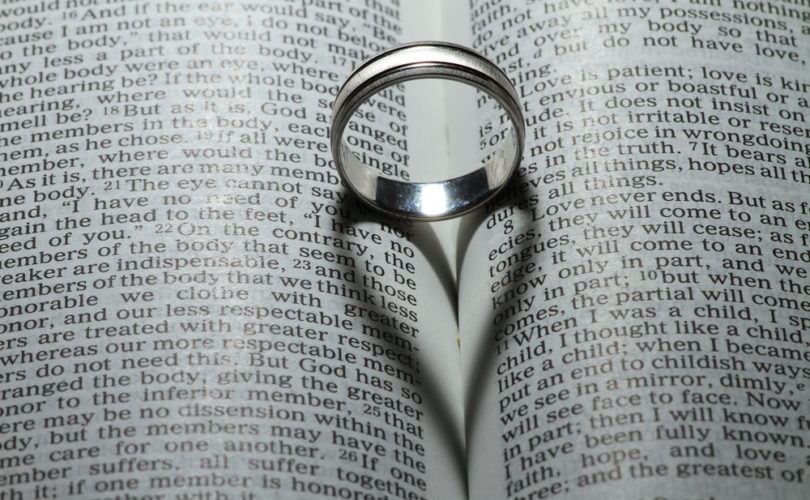 The Instrumentum Laboris, which is intended to guide the deliberations of the Extraordinary Synod on the Family, begins with a discussion of the ‘biblical teaching on the family.’ In that context, and in the light of the radical proposals being made by influential figures such as Cardinal Kasper, with regard to the admission of the divorced and ‘remarried’ to Holy Communion, it will be profitable to examine what Sacred Scripture has to teach us about the nature of marriage.

The teaching of Our Lord

Our Lord showed his great esteem for matrimony by performing his first miracle at the wedding feast in Cana (Jn 2:11). However his longest exposition on marriage is found in a dialogue with the Pharisees recorded in the gospels of St Mark and St Matthew. The text in St Mark is as follows:

And Pharisees came up and in order to test him asked, “Is it lawful for a man to divorce his wife?” He answered them, “What did Moses command you?” They said, “Moses allowed a man to write a certificate of divorce, and to put her away.” But Jesus said to them, “For your hardness of heart he wrote you this commandment. But from the beginning of creation, `God made them male and female.’ `For this reason a man shall leave his father and mother and be joined to his wife, and the two shall become one flesh.’ So they are no longer two but one flesh. What therefore God has joined together, let not man put asunder.” (Mk 10:2-9)

In this passage Jesus acknowledges that divorce was tolerated under the old covenant but identifies this as a concession to the ‘hardness of heart’ of the people of Israel.

In words of the greatest profundity he leads his listeners away from such ‘hardness of heart’ to the original truth about marriage and human nature as expressed in Genesis; “a man shall leave his father and mother and be joined to his wife, and the two shall become one flesh.” (Gen 2:24).

Paul Mankowski SJ argues that this statement is not the expression of an unattainable ideal but rather the statement of an unchanging reality. It is “a universal truth, detached from local, historical, or even religious specificity, neither directed at a particular nation nor elicited from any nation’s wisdom.”

Our Lord’s striking re-emphasis, with his words “so they are no longer two but one flesh”, points to three truths:

This new entity, being one flesh, only ceases to exist when one of the individuals composing it dies. Hence Our Lord taught, in words which have echoed down the ages; “What God has joined together, let not man put asunder.”

The consequences of these words are made clear by Our Lord in the verses immediately following the passage above:

This is repeated in the gospel of St Luke:

St Paul also repeats the teaching, specifically identifying Our Lord as the source:

“To the married I give charge, not I but the Lord, that the wife should not separate from her husband (but if she does, let her remain single or else be reconciled to her husband) — and that the husband should not divorce his wife.” (1 Cor 7:10-11)

It is on these firm and clear words that the Church grounds her teaching that no authority on earth can dissolve a consummated sacramental marriage.

Is there an exception to this teaching in the Gospel of St Matthew?

The discourse between Our Lord and the Pharisees can also be found in the gospel of St Matthew with some differences. The most significant is in the following sentence:

“And I say to you: whoever divorces his wife, except for porneia, and marries another, commits adultery.” (Mt 19:9)

The word porneia is usually translated as ‘immorality’ or ‘fornication’ and certainly in the Greek Old Testament (the Septuagint) the word is used to indicate forms of sexual immorality.  The Eastern Orthodox churches interpret this phrase as permitting the dissolution of marriage in the case of adultery.

The Catholic Church however has never understood these words in that light and has taught that there are no circumstances in which a consummated sacramental marriage can be dissolved. How then should they be interpreted?

A common interpretation has been that Our Lord is permitting spouses to separate in certain circumstances, though not to remarry. While this is plausible, another theory is advocated by Fr Paul Mankowski in Remaining in the Truth of Christ.

Mankowski notes that the word porneia is used in the New Testament in the context of incest.

This is most obvious in 1 Corinthians 5:1 where St Paul uses the word to condemn “a man living with his father’s wife”.

Porneia also seems to refer to incest in the book of Acts. The relevant quotation is taken from the letter sent by the Church in Jerusalem to the gentile converts.

“For it has seemed good to the Holy Spirit and to us to lay upon you no greater burden than these necessary things: that you abstain from what has been sacrificed to idols and from blood and from what is strangled and from [porneia].” (Acts 15:28-29)

Gentile converts were being instructed, by some Jewish Christians, to observe the whole of the law of Moses. The Church wished to assert that under the New Covenant the ceremonial and ritual precepts were no longer binding. Given that three of the items in this list are requirements of the Mosaic law that the Church wished still to bind, it would make sense for the last, porneia, also to be in this category rather than having a wider meaning of sexual immorality.

The law of Moses contained prescriptions against incestuous marriages and similar laws against incest have always been retained by the Catholic Church (for example Canon 1091, 1983 Code of Canon Law).

Furthermore the so-called ‘Damascus Document’, a Jewish text of the period, explicitly uses the word zənut, which was consistently translated into Greek as porneia, to refer to laws against incest and polygamy.

It is reasonable then to suggest that in Mt 19:9 Our Lord is referring to incestuous and polygamous marriages. He is asserting that (1) such ‘marriages’ would be invalid and separation would not only be permissible but mandatory and (2) that entry into a new, valid, marriage would be permissible for those who had not already entered into such a union.

In any case the teaching of the Catholic Church on divorce and remarriage cannot be clearer.

Nigerian archbishop will tell Synod: ‘Take away family and society will collapse’ (VIDEO)