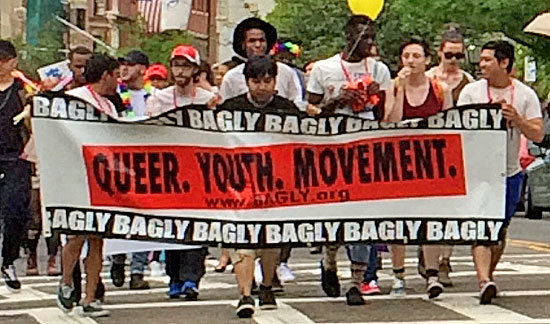 The "Youth Pride parade" was pretty open about what the "gay straight alliance" school clubs are really all about.

May 31, 2016 (MassResistance) — What goes on in the “gay straight alliance” clubs in high schools – and now in middle schools – across the country? What happens to kids that are persuaded to join them? We had a chance to see it up close – at one of their statewide events. And it’s worse than anyone realizes.

On Saturday, May 21, 2016 the “Massachusetts Youth Pride” event was held at Boston City Hall Plaza. It’s an annual gathering for middle school and high school “gay straight alliance” (GSA) clubs across the state.

The event is organized by various outside adult homosexual and transgender activist groups. It receives financial support from the state government, including the state-funded (adult-run) Massachusetts Commission for LGBTQ Youth.

A day of LGBT “entertainment,” propaganda, and activism

It started with a “pride festival” that included entertainment for the kids and dancing, with numerous LGBT adults mingling. Set up next to that were booths by run by a range of LGBT-related organizations handing out condoms, literature, buttons, books, and other paraphernalia to the kids.

At noon, the adults and kids gathered for the annual “Youth Pride Parade.” They marched through the streets of downtown Boston, past the State House, and back to City Hall. Then in the evening the City of Boston opened up City Hall for a “gay / transgender youth prom”.

A few things stand out to the outside observer. The first is how obviously troubled and vulnerable most of these kids appear to be. Many kids who are attracted by the GSA club's promise of “support” have been physically and psychologically abused — and need professional help. Sadly, the LGBT movement sees them as their future foot soldiers. The adult activists persuade kids that their true self is “gay” or “transgender”, which includes participating in those behaviors. They use various paychological methods, including chants, sign-holding, etc., to make the kids feel that they are part of an important movement, fighting for good against evil.

Another disturbing thing is the sheer number of adult activists involved with these events — and how bizarre and obviously troubled many of them are. There are lots of outside homosexual groups and other activities, run by adults, that are openly trying to lure the kids. It is also quite outrageous how emphatically the city and state elected officials support this hideous event.

Most people are completely unaware that any of this is happening. And there was a lot to see. There was so much that we can’t cover it all in one article. We’ll give you a start in this post, and continue in our next one.

LGBT activists constantly deny that sexuality is part of their movement. But the evidence is overwhelmingly the opposite. Here are a few photos from the booths at the “festival”:

Also at the booths:

This is just the the beginning. Coming up in our next post: What they gave to the kids about transgenderism, violence, diseases, religion, and more.