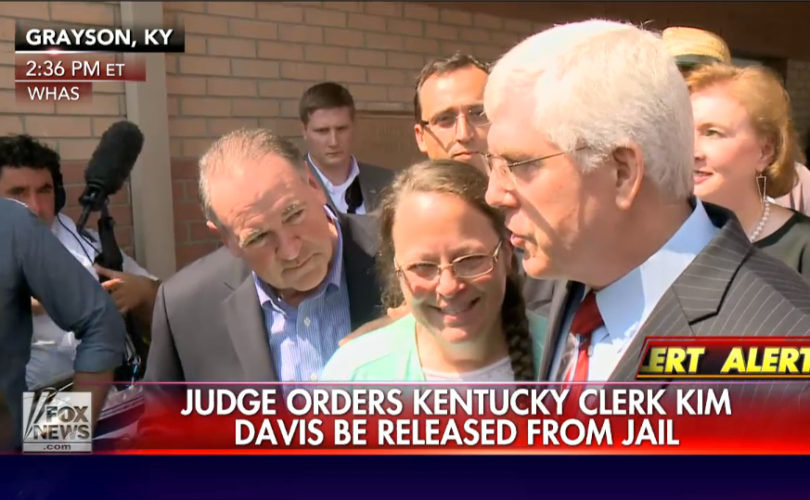 First, she stands alone. Well, not quite alone. There are other public officials who have vowed not to give their approval to same-sex marriages, but for various reasons they have not (yet) faced legal sanctions.

Second, in the Davis case, a federal judge has unleashed the full force of judicial power in order to crush resistance to same-sex marriage. Rather than seeking a way to accommodate homosexual couples without forcing her to violate her conscience, the judge chose to make an example of her. In other, previous cases, involving proponents of same-sex marriage who refused to carry out their legal duties, the courts have taken no such draconian action. Obviously Judge Bunning saw this case as a potentially important precedent, because if Kim Davis can resist with impunity, others will be tempted to do the same.

Well, let’s explore that possibility for a few minutes. What would happen if, across the country, hundreds or even thousands of clerks joined Kim Davis and refused to issue marriage licenses to same-sex couples? Let’s imagine that in large swaths of America, homosexual couples were not allowed legal access to marriage, despite the Supreme Court decision claiming that this is their right. We’d have a constitutional crisis on our hands, wouldn’t we?

Yes, indeed we would. And I say: Bring it on!

The crisis, in that case, would arise not from the actions (or inactions) of Kim Davis and her fellow clerks, but from the absurd and illegitimate decision of the Supreme Court. Our form of government is based on a system of checks and balances. But through the connivance of the executive branch, and the negligence of the legislative branch, the judiciary is now unchecked. There is no effective limit to what five members of the Supreme Court can do, through the arbitrary extension of their own power.

If hundreds or thousands of clerks joined Kim Davis, other public officials would be forced to ask some serious questions about what they were required to do. Police officers and court bailiffs and federal marshals and prison guards might ask themselves whether it was sensible to put so many harmless people behind bars. Judges might recognize the injustice of Judge Bunning’s approach, and look for other solutions. Members of Congress might even awaken from their slumber, and impose some limitations on the jurisdiction of the Supreme Court—as the Constitution allows Congress to do.

Ultimately the power of government relies on the consent of the governed. When a branch of government leaps beyond its proper authority, as the Supreme Court did in the Obergefell decision, civil disobedience and passive resistance are natural ways by which the people withdraw their consent, and force—one hopes—a restoration of limited republican government.

This article appeared on Catholic Culture and is re-published with permission.