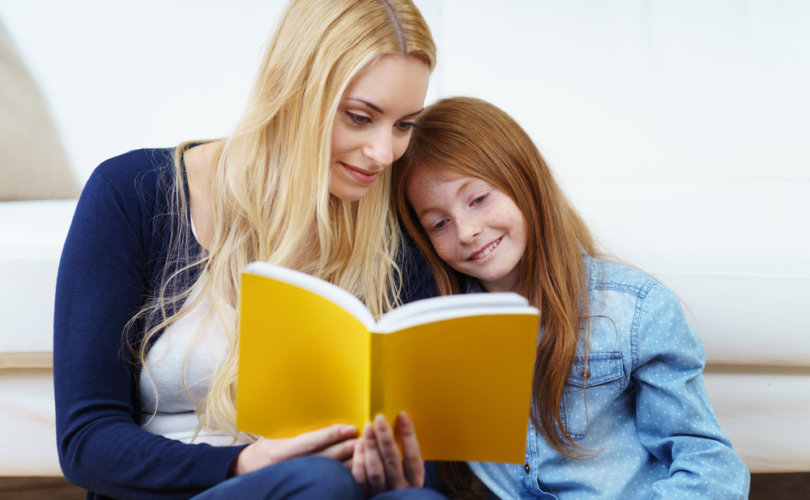 July 27, 2016 (Seton Magazine) — It is said that you become like those with whom you associate.

Honesty would force us to admit that the same is true of books. That thought is a bit less than edifying when we consider that Amazon.com’s bestselling book of all time is Fifty Shades of Grey: Book One of the Fifty Shades Trilogy.

In fact, if you go to Amazon.com and look up the five top-selling books of ALL TIME, three of them are books from the Hunger Games series and two of them are from the Fifty Shades series. Judging from observable cultural data, that fact should surprise exactly no one. But it should cause us Catholic parents to redouble our efforts to introduce our children to the great literature.

Sadly, that’s not always an easy task because somewhere along the way, someone took classics out of the American and European curriculums. Retrospectively, we can guess why. Many of the ancient and medieval authors accepted a transcendent core of truth, beauty, reason, and natural law.

In many ways—and to many people—that is why they are considered “classics.” And so, rather than argue against truth, beauty, reason, and natural law, progressive educators realized that the best way to win their argument was to not have that argument at all.

We can argue the motive; what is unassailable is the fact that many curriculums did, in fact, remove these great books.

For starters, gone were the Greek poets and philosophers who contributed so much to the service of truth. Individually, perhaps, the first casualty was Aristotle. Was that a big deal? Let Dr. Edward Feser, author of The Last Superstition: A Refutation of the New Atheism, answer that question.

How significant is Aristotle? Well, I wouldn’t want to exaggerate, so let me put it this way: Abandoning Aristotelianism, as the founders of modern philosophy did, was the single greatest mistake ever made in the entire history of Western thought.

Aristotle was abandoned, but he had company: the Romans were gone, too. Case in point: next time you hear a political speech, ask yourself if that speech is the result of serious academic attention to Cicero, one of the greatest orators in history. Many other great thinkers of antiquity—the great actors on the world stage of genius—keep getting written out of the script. They have exited stage left and been replaced on the stage by the Left.

Antiquity—a term that is taken to mean the “genius of old”—keeps getting moved up on the academic calendar. Today, antiquity isn’t Homer or Plato, nor is it even Shakespeare and Milton, but Kurt Vonnegut and Jack Kerouac. And if “antiquity” is Kerouac, is it any wonder that romance is E. L. James?

Which brings us to today.

Every so often, a reference to Aristotle or Cicero pops up in pop culture, but these only serve as faint elegies of what we have lost. As Allan Bloom observed,

We are like ignorant shepherds living on a site where great civilizations once flourished. The shepherds play with the fragments that pop up to the surface, having no notion of the beautiful structures of which they were once a part.

More simply, through no fault of their own, generations of parents were never introduced to the classics texts of Western civilization. Perhaps most people instinctively know that when you’re talking about “the classics,” you’re not talking about The Hunger Games, nor are you speaking about the dismal Fifty Shades series.

What you are talking about is that body of literary works that has been collectively termed the “Western Canon,” that is, those books that collectively helped shape Western society.

Harold Bloom (not Allan Bloom) rather famously developed an outline of the Western Canon in his book of the same name, as did Mortimer Adler with his “Great Books” program. Though we may disagree as to precisely which works should be on that list, there are generally accepted entries such as Plato’s Republic, Aristotle’s Nicomachean Ethics, Plutarch’s Lives, Cervantes’ Don Quixote, Chaucer’s Canterbury Tales, and so on.

I would observe that a parent reads for oneself and one’s children. Perhaps especially in the homeschooling family, this is of paramount importance. Because if we are not reading the classics ourselves—if we do not regard them as worthy of our precious time—why would our children read them either? Anthony Esolen recently observed that:

…Any school librarian with a free hand and a very modest amount of money can quickly put together a set of a thousand or two thousand classic novels and books of poetry fit for children, that would have been far beyond the means of almost anyone a hundred years ago….For the most important thing that any teacher of reading can do for children is to read good and great books with them and for them, with imagination and love.

Regarding the Western Canon, I would further observe that—though much of the canon is already occupied by Catholic writers—there also exists what could be called the “Catholic Canon,” meaning those works that shaped and formed Catholic culture.

This would include titles such as Tertullian’s Apology, St. Augustine’s City of God and Confessions, St. Athanasius’ Life of Antony, St. Jerome’s The Perpetual Virginity of Blessed Mary, St. Teresa’s Interior Castle, St. Bonaventure’s Journey of the Mind into God, St. Thomas’ Summa Theologica, Dante’s Divine Comedy, Thomas More’s Utopia, Bellarmine’s The Seven Words on the Cross, and hundreds of others.

As Catholic parents, though it is immensely fruitful to read the selections of the Western Canon (particularly the Greek contributions of philosophy), it is this “Catholic Canon” to which we must devote much of our energies.

Many Catholic parents understand that our culture is increasingly atheistic and pagan. But if we don’t like the progressively pagan culture outside, we Catholic parents must make an effort to foster and nourish the culture inside our homes.

Our domestic response—our rebuttal—should be to read this Catholic Canon. Irrespective of what the rest of the world might be (or might not be) reading, it is these canonical works that we ought to be reading along with our children. And if we are introducing our children to new friends, why not choose Aquinas, Dante, Augustine and Bonaventure?

Reprinted with permission from Seton Magazine.