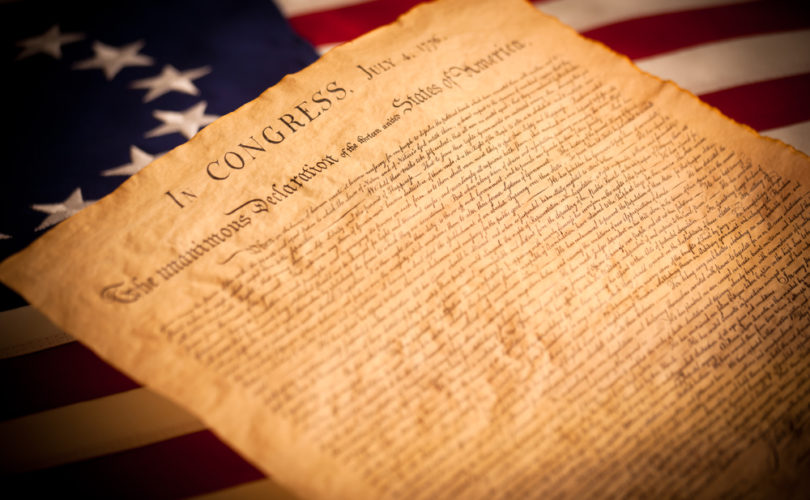 Editor's note: On this Fourth of July, we are publishing a 1997 broadcast by Evangelical leader Chuck Colson originally posted at Breakpoint.org.

Quick, what famous event do we commemorate on the Fourth of July?

Not sure? A little rusty on your 6th-grade civics? Well, you're in good company. A Gallup poll reveals that one out of every four Americans does not know that the Fourth of July commemorates the Declaration of Independence.

And by the way, the same number can't tell you what country we declared independence from.

It's a poor patriotism that doesn't even know our national history and traditions. Let's take this Fourth of July and ask what it means, in the light of Scripture, to be an American citizen.

Patriotism used to be a simple matter. Most of America's traditions were rooted in a Christian heritage. To be a good Christian seemed to be synonymous with being a good American.

And no wonder. Through most of our history as a nation, Christianity was the dominant religion. At the birth of our nation, the founding fathers declared a national day of prayer and thanksgiving—a holiday we still celebrate.

From that time on, many states required the Christian religion to be taught in colleges, prisons, and orphanages. Up until the 1960s, many states required Bible reading and prayers in the public schools. Textbooks referred to God without embarrassment. Almost all Americans agreed that our law was rooted, as John Adams said, in a common moral and religious tradition stretching back to Moses on Mount Sinai.

In a culture like that, it was easy for a Christian to be a patriot. Maybe too easy. Vibrant biblical faith often degenerated into a mere civil religion, where the well-being of the country was often equated with the expansion of God's Kingdom. But today the dominant culture is certainly no longer Christian. Many of our cultural and intellectual leaders have come to reject the major values and institutions of American life—especially its religious values and institutions.

This movement is sometimes called the adversary culture, for it criticizes the American system while praising other political systems—even communism at the height of the gulag. During the Vietnam War, actress Jane Fonda told a student audience that if they only understood communism, and I quote, “you would hope, you would pray on your knees that we would someday be communists.”

Well, it's a long way from the founding fathers declaring a day of prayer and thanksgiving to Jane Fonda urging us to pray for the overthrow of the American system.

But where in this range of attitudes is true Christian patriotism?

The Christian position is beautifully balanced. On the one hand, we don't deify our country. We don't wrap the flag around the cross. For we know that our ultimate citizenship is in heaven, and that's where our ultimate allegiance is.

But at the same time, the only place for expressing that allegiance is in concrete loyalties God has called us to here on earth—including loyalty to country. We can't love mankind in the abstract; we can only really love people in the particular, concrete relationships God has placed us in—in our family, church, community… and our nation. The Christian has the balanced understanding.

So celebrate the Fourth of July this year by thanking God that while He has called you into His kingdom—that’s our ultimate loyalty—He has allowed us to live in—and yes, love—this land of liberty.